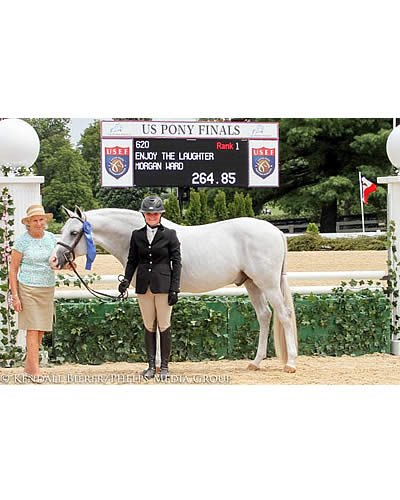 Morgan Ward and Enjoy the Laughter took the first day lead in Large Pony division at the 2015 USEF Pony Finals.

Lexington, KY – August 4, 2015 – Morgan Ward is no newcomer to the USEF Pony Finals, and although she had not planned to attend the 2015 edition of the competition, she was recently presented with an offer she could not refuse. Dr. Betsee Parker asked Ward to ride Enjoy the Laughter, and on the opening day of the competition, the duo did not disappoint, winning first place in the Large Pony Model, and racking up enough points to lead the way on opening day.

“I just started riding him a couple of times at home, and shortly after they asked me to show him,” Ward explained. “I was told that he always wins the model, so it was my good point. He is a beautiful pony overall.”

Ward continued, “There were a lot of ponies out there, so it felt great to be able to win. I was a little bit nervous because Dr. Parker has a lot of ponies on hand, and having her ask me is a great opportunity. I had a good feeling going in. Hopefully we keep it up for the over fences phase.”

At 17 years old, Ward is bittersweet about her eighteenth birthday next week, knowing that she will be closing a successful chapter in her life to begin her career as a professional rider.

“It’s sad in a way because I have so many junior rides, but I am going professional next year and I cannot wait to start that life,” Ward elaborated. “I was not going to come at all this year, but then Scott [Stewart] asked me to show for Dr. Parker and my sister [Lindsey Ward] asked me because she has a Large Green Pony. It is still a good time being here.”

Ward currently sits atop the leader board in the first position, just ahead of Emma Kurtz and All My Love, also owned by Dr. Betsee Parker. Ward leads with 519.35 points, with Kurtz hot on her heels with 513.36 points. The final division standings for the large ponies boils down to tomorrow’s over fences classes, which kick off beginning at 11 a.m. in the Walnut Ring at the Kentucky Horse Park.

Ward explained, “I feel confident going into the over fences because he rides a lot like my junior hunters. He goes slow, has a big step, jumps great and has expression, so now it is on me.”

Kurtz captured the third place in the Large Pony Model, as well as the eighth place in the under saddle to earn enough points to return as the penultimate rider tomorrow afternoon.

It was first-time U.S. Pony Finals competitor Katherine Kemps, of Austin, Texas, who captured the blue ribbon during the under saddle with Occhio. Kemps is making her first appearance as an exhibitor, and she exuded confidence as she gushed over Occhio, the bay pony who clinched the first place during the Large Pony Under Saddle.

“He is probably my favorite pony that I have every ridden,” Kemps said. “He is super sweet and is probably one of the most loving animals I have ever met. He hugs my groom, Manny, every morning.”

Kemps continued, “I am really excited right now. It hasn’t set in yet; to win at Pony Finals is very exciting. It has been a year and a half now of working with Occhio, but he really stands out. I think he just has his own way of moving. He is so calm every time I am on him. He is so well put together.”

Currently, Katie Ray and Rockaway, owned by Ramble On Farm of Malvern, Pennsylvania, sit in the third position going into Wednesday’s over fences and division championship, while New York’s Lily Ezrow and Empire’s Victory are fourth. Whitney McKinley of Macon, Georgia, and Just My Style sit in the fifth place, and Taylor St. Jacques with Glynhafan Re Kestral, owned by Peacock Ridge LLC of Greenwich, Connecticut, round out the top six.

In the Small Green Pony division, Sophia Calamari, no stranger to the U.S. Pony Finals winner’s circle, rode With Applause, owned by Jessie Spade of Terrell, North Carolina, to two high-ranking finishes in the model and hack portions of the division. The pair earned the first place in the under saddle and the red ribbon in the model to secure the spot at the top of the leader board headed into the second day of competition, a situation with which Calamari is all too familiar.

Last year, 14-year-old Calamari, of New Milford, Pennsylvania, rode her own pony, Smitten, to near identical placings in the Small Green Pony classes, and eventually took the overall prize. Now, her seventh trip to Lexington for the Finals, the young rider has picked up a new ride in With Applause, but as of yesterday, that was not the case.

‘Colby,’ as he is known in the barn, was pegged to be ridden by his owner in the Finals this year, but an unfortunate injury prior to the start of competition led to the need for a replacement rider, and luckily Calamari was available. Although she picked up the ride last minute, Calamari had seen the pony go before and came into the day with some knowledge on his way of going.

“I met him in Florida this year, and watched him go a lot in the Greens. He seemed like a really, really sweet pony. I was attracted to his movement and the easy way he goes around, he just looks happy all the time,” Calamari commented.

Regardless of the rider, it is clear that Colby is a once-in-a-lifetime pony, and his owner does not take that for granted.

Spade said, “He is such a good pony, and if you ever get the chance to own him, keep him for as long as you can. I can always count on him. Even though I’m not riding, it’s great to see him win with someone else. My parents are hilarious; they fight over him all the time, saying ‘I wanted him’ and ‘No, I wanted him first.’ It’s so funny.”

As Small Green Pony Champion last year, Calamari was visibly excited to have another shot at the tricolors for the second year in a row.

“It feels amazing, and I hope we can duplicate our results again. I’m definitely feeling confident and excited, and am so glad to have the opportunity to ride this pony here – it means a lot to me,” Calamari said.

Taking the blue ribbon ahead of Calamari and With Applause in the model phase was Caroline Passarelli, of High Falls, New York, in the irons aboard Morgan Ward’s Cabana Boy. The 14-year-old Passarelli rode to a top six finish last year in the Smalls, and is hoping to improve upon her performance this year with her new mount.

“I’ve only ever ridden him one other time, last week at HITS Saugerties, so I’m new to him, but he is really fun and tries his hardest. He is amazing, thinks very highly of himself, and knows that when the judge comes by that he needs to stand and look pretty,” Passarelli said of the pony.

Passarelli was asked just a few short weeks ago by the Ward family, who had a winner of their own earlier in the day, to ride the pony, and she eagerly said yes. Only 5 years old, the small pony certainly acts his age outside the ring, according to Passarelli, but turns on his game once inside the ring.

“It is like playing with a little kid – he licks your face, he bites the reins, bites me, in a playful way! He is so fun and has a huge personality,” the young champion noted, “but once we are in the ring he is very excited and brave, especially for just turning 5.”

Currently sitting in first and fifth overall, respectively, Calamari and Passarelli will ride their ponies against more than 40 other competitors in the over fences section of the Small Green Pony division Wednesday to try and claim the top honor. Libbie Gordon and Glenhaven Astoria, owned by Parker Peacock of Winston-Salem, North Carolina, currently sit in second place, followed by Augusta Iwasaki and Calabasas, owned by California-based Iwasaki & Reilly’s Small Addition, in third position. Maddie Stiles and her own Royal Moment earned enough points to put them in fourth ahead of Passarelli, with Devin Seek aboard Woodlands Polar Bear, owned by Bibby Hill of Reddick, Florida, finishing in the top six. The class is scheduled to take place at approximately 4:45 in the afternoon, following the conclusion of the Large Regular Pony division.

The Small Pony Hunters kick off tomorrow, with the Small Pony Model beginning at 7 a.m., followed by the under saddle portion around 8 a.m.

The ASPCA Maclay course, by Bolivian designer Jose Gamarra, tested the skill and ability of both horse and rider. The course began with a sharp turn to an oxer on the outside line. It continued on the far side of the arena to a tight rollback presenting fence two, and a left lead to a vertical-oxer combination on the outside line. Another turn to the left introduced a long diagonal bending line, and continued into a right turn leading to a vertical. With a right turn and a strong gallop, riders took a single vertical and finished over the final oxer.