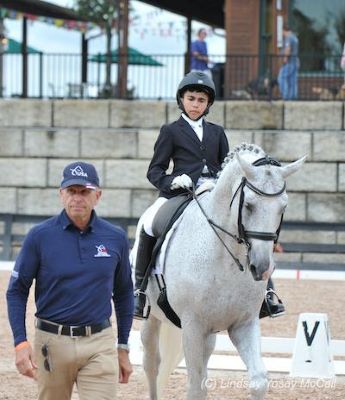 Colorado Springs, Colorado – February 23, 2021 – United States Olympic and Paralympic Committee has named Para Dressage Chef d’Equipe Michel Assouline as 2020 Paralympic Coach of the Year. Michel Assouline started with the U.S. Para-Equestrian Dressage program in May 2017. His innovation and persistent drive to grow the sport and expand the program has impacted the whole Para Dressage community. Through the pandemic, Assouline has helped several athletes work through emotional pressures and reposition athletes’ training schedules by utilizing technology and focusing on enhanced communication. His efforts include online judging, direct coaching through PIXIO, group meetings, and one-on-one meetings, which proved effective when athletes showed performance improvement at the 2020 Adequan®/USEF Para Dressage National Championships October 23-25. In three years, Michael has built a Para-Equestrian Dressage Coach Certificate Program that was rolled out across the country during the latter part of 2019 and early 2020 that received high participation with 32 coaches going through the program. In March 2020, the U.S. Para Dressage Team ranked No. 1 in the world having achieved scores that would have tracked Team USA to be on the podium at Tokyo 2020. At the heart of Assouline’s success is his ability to work with each athlete and build a specialized program around them to improve their development and performance, which can be seen in Roxanne Trunnell, who is currently ranked No. 1 in the world in her grade and overall across all five grades. 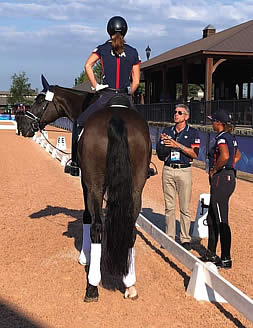 Lexington, KY – January 16, 2019 – US Equestrian is excited to launch the Para-Equestrian Dressage Coach Certificate Program, a first of its kind for the industry. This certificate program covers the principles of para-dressage coaching including guided improvement process, coaching philosophy, and sport-specific skill acquisition.  It develops a coach’s ability to prepare athletes from grassroots education to international competitions, along a continuum of progressive certificate levels. With the goal of coach development, the program uses classroom lecture time as well as simulated lessons, where coaches are given information and feedback on their teaching, knowledge, and overall performance.  The certificate program will take 3-6 months to complete, with a fast-track program offered, and involves onsite practicums, self-study, online exams, and final assessments.

Michel Assouline, USEF Para-Equestrian Dressage Technical Advisor and Head of Coach Development, is responsible for spearheading this initiative, bringing a decade of curriculum development and Paralympic coaching experience to bear. Michel will be joined by other USEF-approved faculty to approve applications, deliver on-site practicums, and perform final assessments. The 2019 dates for the Para-Dressage Coach Certificate Program are listed below. The link to the full information booklet showing the application process and certification levels can be found here:  https://www.usef.org/compete/disciplines/para-equestrian/para-equestrian-dressage-programs-forms/usef-para-dressage-coach-certificate-program.

US Equestrian would like to thank the U.S. Department of Veterans Affairs for providing the Federal Adaptive Sport Grant which has helped to make this coach certificate program possible. This initiative has been conducted in partnership with the Professional Association of Therapeutic Horsemanship with a goal of increasing awareness and coach education opportunities within Paralympic Equestrian Sports and to aid in the development of a USEF Coach database to support the competition pipeline for para-eligible athletes.

For more information about the USPEA, please visit www.USPEA.org or contact USPEA President: Hope Hand by e-mail: hope@uspea.org or by phone: (610)356-6481. 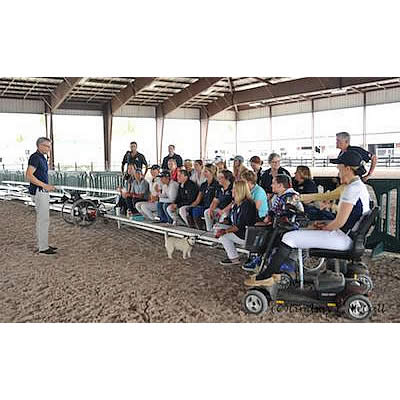 Wellington, FL – March 22, 2017 – Team Great Britain Para Equestrian Dressage Coach Michel Assouline flew to Wellington, FL to conduct a Para-Dressage Symposium March 12-14, 2017. The symposium followed the Adequan® Global Dressage Festival CPEDI3*. For United States Para-Dressage riders this was a unique opportunity to work on the new FEI Para-Equestrian Dressage Tests following an international competition. Both Assouline and U.S Para-Dressage Technical Advisor and Chef d’Equipe Kai Handt worked with each athlete and their home coaches in the Van Kampen Arena at the Palm Beach International Equestrian Center. The focus of the symposium was finding the appropriate competitive horse for each athlete’s Grade and working on what the judges are looking for in the new Tests.

Michel Assouline noted, “I had the pleasure to work with riders and coaches at the Wellington International Equestrian Center, during the USEF Para-Equestrian Symposium. Horses had quality and true potential to progress with the aim to gain consistent marks in competition. It was a question of seeing what they can be rather than what they were, repeating good habits in their training routine which will be more easily replicated in competition. Winning is a habit. Unfortunately, so is losing. Training sessions were fragmented in building blocks to identify blockers in detail, which were then shared with coaches, as attention to detail is everything in any winning culture. A really exciting pool of good rider-horse combinations.”

Para-Dressage rider Katie Jackson took part in the symposium with Assouline. She expressed, “I really enjoyed having the opportunity to learn from Michel Assouline.  The symposium was a fantastic opportunity for all of us to learn from one of the best in our sport.  On the first day Michel shared valuable insight about developing the para-dressage athlete, giving us his perspective on how to grow as individual riders and as a team.  He also spoke on the key areas that have created the success of Team Great Britain, including having a strong foundation for riders, coaches, and their support teams to grow and develop from.  During my rides I appreciated Michel’s attention to detail. I especially liked his patience and focus on correct basics such as straightness and connection to improve the horses’ gaits.  He gave helpful suggestions on how Royal and I can improve as a team and I felt that we made some big improvements over the two days of riding.  A big thank you to USEF/USPEA and our sponsors for making this symposium possible.” 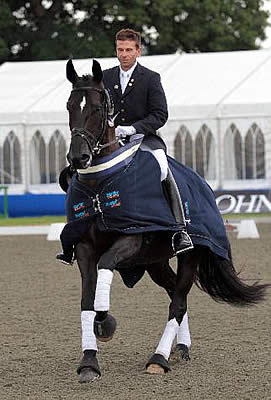 Wellington, FL – February 22, 2017 – Michel Assouline will conduct a Para-Dressage Symposium March 12-14, 2017, following the Adequan® Global Dressage Festival CPEDI3* in Wellington, Florida, March 9-12. The symposium will take place at the Van Kampen Arena at the Palm Beach International Equestrian Center. Riders will begin working with Assouline on March 12, and will continue to ride over two full days March 13 and 14. The cost of the symposium is $500 for riders and $200 for auditors. The focus of the symposium will be finding the appropriate competitive horse for each athlete’s Grade, working on what the judges are looking for in the new FEI Para-Dressage Tests. Assouline will work in collaboration with the U.S Para-Dressage Technical Advisor and Chef d’Equipe Kai Handt. For more information on the details of this symposium, please contact Laureen Johnson, High Performance Director, Para Equestrian & Vaulting, United States Equestrian Federation, Inc. Email: lkjohnson@usef.org .

Michel is a graduate of the French National Equestrian School, home of the Cadre Noir in Saumur and gained a vast international experience in the USA, France, Germany and the United Kingdom as an international dressage rider and trainer. Michel was long-listed to represent France at the Seoul Olympics and won the French National Championships in 2000.  He has also scored numerous successes at International and National level.

In March 2009 Michel was awarded the PDTT Coaching Award, and in November 2012 Michel was awarded the UK Sports Coach Medal and inducted in the Coaching Hall of Fame at the UK Coaching Awards ceremony. Later that year at the London Olympia International he received the prestigious British Equestrian Federation Medal of Honour. Team GBR made the following statement at the time: ‘Michel has been the British Paralympic team coach for eight years, during which time the GB team have remained unbeaten at major team championships, amassing 85 medals in total, including the 2012 Paralympic haul of 11.