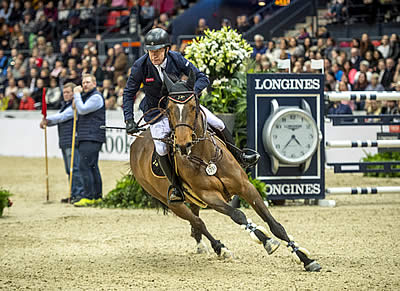 It was freezing cold outside but the temperature in the Scandinavium Arena was near boiling point when, for the second year in a row, Swedish superstar Henrik von Eckermann (36) and his brilliant mare, Mary Lou, galloped to victory in front of their home crowd at the last leg of the Longines FEI World Cup™ Jumping 2017/2017 Western European League in Gothenburg (SWE). Runner-up was Olivier Phillipaerts (24), the young Belgian whose previous visit to this Swedish city didn’t end so happily, while British veteran Michael Whitaker (57) finished third.

“When I saw the jump-off course I knew it would suit Mary Lou. You can totally trust her; you don’t need to take a pull anywhere, just let her run and use her pace and her long stride, and she was fantastic again today!” — Henrik von Eckermann SWE (1st)

From 36 starters, 11 found the key to Peter Lundstrom’s enormous first-round track, and it was the time of 41.59 seconds set by Frenchman Aldrick Cheronnet (Tanael des Bonnes) that von Eckermann was chasing when fourth to go against the clock. He blew that target right out of the water when scorching through the timers in 36.89 seconds, piling the pressure on the rest of the field. Whitaker and JB’s Hot Stuff came close when breaking the beam in 37.52 – “I thought I’d done it. She’s not big but she has a big heart and she’s fast – today she wasn’t fast enough but she always tries her best,” he said of his exciting new ride. However, the last man in would push him down to third.

Olivier Philippaerts made an early departure from last summer’s Longines FEI European Championships in Gothenburg when badly dislocating his shoulder in a fall from H&M Legend of Love during training. “My horses had three months off and this was probably good for my mare, but it takes time to get fit again and I was late starting in the World Cup series, so this is great!” he said when realising that this result means he is qualified for the 39th annual Final which will take place from 11 to 15 April.

Paris last hosted the series finale back in 1987, and Michael Whitaker competed there that year. “I think I’ve done about 25 Finals so it’s about time I won it!” he said. Von Eckermann also has the most coveted trophy of indoor showjumping clearly in his sights. “I finished third in Omaha (USA) last year and I don’t want to finish lower than that this time,” he said. 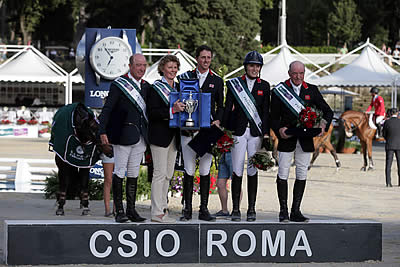 Rome (ITA), 27 May 2016 – Team Great Britain clinched the Furusiyya FEI Nations Cup™ Jumping title for the second year in a row at Piazza di Siena in Rome (ITA). And it was the genius of the legendary John Whitaker that sealed the result with a brilliant last-to-go run with Ornellaia. The 60-year-old rider is one of the best-loved characters in the sport, and could afford a single fence down in the second round. But true to form, he left all the poles in place to post one of four double-clears on a day of brilliant sport to secure the winning British total at just four faults.

The World and European champions from The Netherlands were firm favourites as the action began, but they disappeared from the reckoning with a disappointing second round and it was the French and Americans who eventually filled runner-up spot with 12 faults each. Germany slotted into fourth ahead of the The Netherlands in fifth while Canada lined up sixth ahead of Sweden and Italy who divided seventh place.

The air at Piazza di Siena was filled with pre-Olympic tension and, from the outset, the British demonstrated their resolve. As defending Olympic champions they came up against teams they may well meet in Rio de Janeiro (BRA) in just over two months’ time, and the message was loud and clear. They were the only side to conclude the first round on a zero score as John Whitaker’s first fault-free effort was matched by Ben Maher with Tic Tac and Jessica Mendoza riding Spirit T.  Michael Whitaker, who along with his older brother was also a member of the winning team at Piazza di Siena 12 months ago, produced the first-round discount score with nine faults from Cassionato. But his foot-perfect second run would prove pivotal to the end result.

This was Great Britain’s eleventh victory at Piazza di Siena since the Nations Cup was first staged at the iconic venue in 1926 and, as Chef d’Equipe, Di Lampard, pointed out afterwards, Friday’s performances just make her selection decisions for the Rio 2016 Olympic Games all the more difficult. “But that’s OK,” she said. “It’s a really good problem to have!”

As the second round began the competition was still wide open, with the Americans, Dutch, French and the host nation all stalking the leading British with just four faults on their respective score-cards. Sweden had already racked up eight faults while the Canadians and Germans had nine apiece, and with additional penalties none of these nations would feature prominently at the end of the day. One of the standout performances of the day, however, came from Sweden’s Malin Baryard-Johnsson and the very exciting 10-year-old mare H&M Cue Channa 42 who cruised around both rounds with the greatest of ease.

Despite a fabulous double-clear from Penelope Leprevost and Vagabond de la Pomme, the French lost their grip, and the Americans did likewise when also adding eight more faults even though their anchor partnership of McLain Ward and HH Azur were also foot-perfect for a second time. Italian chances were dashed with 20 faults to add to their tally, but the biggest surprise was the collapse of the Dutch whose pathfinder, World and European champion Jeroen Dubbeldam, added 16 faults to his first-round single error with SFN Zenith on a day his team will probably prefer to forget.

It was impossible to predict the outcome, however, when Ben Maher kicked off Britain’s second round with a mistake at the first element of the difficult double at fence eight as well as the last fence. Mendoza hit only the delicate vertical that followed the spooky hedge-filled oxer at fence five, but then Michael Whitaker began to pull it back with a great clear from the enigmatic Cassionato who was a lot more settled on his second tour of the arena.

This ensured that his brother had a fence in hand coming into the ring to bring the competition to a close. John said afterwards that it was less pressure than 12 months ago – “I didn’t have a fence in hand that day” – but he still had a job to do. And he did it in style, his clear round leaving his team two fences clear of the joint-runners-up from America and France.

John was delighted with Ornellaia. “This was her first Nations Cup and she showed what she can do,” he said. He has already decided that his more familiar ride, the stallion Argento, won’t be going to the Rio 2016 Olympic Games. “Argento is a great horse; he’s a real fighter but he has his limits and I don’t want to push him beyond them. Ornellaia has done some good things already; she’s really careful and she’s the one for Rio if I am needed, and if I am asked to go. I’m definitely keen to go; the Olympics are the Olympics and there’s nothing like them; everyone feels that way, but I’m probably not in the top five (for selection) if Big Star (Nick Skelton) and Sanctos (Scott Brash) are ready,” he explained.

John reckons his brother Michael’s grey stallion also has great Olympic potential. “There’s nothing that horse can’t jump!” he said. Michael admitted that Cassionato was “a bit too fresh” in the first round – “He was jumping up so high, so in the second round I had to ask him to come back down!” he explained. Cassionato certainly seems to have a whole lot of fun every time he goes in the ring – “He’s a bit like a very naughty boy!” Michael said with a laugh.

It was John who was the hero of the day, however, and not for the first time in his life. This man whose career has embraced so many wonderful moments and so many great horses, including the legendary Milton and Ryan’s Son, said this evening that he continues to relish the fun and excitement every time he goes in the ring. “I don’t feel the pressure anymore; I’ve done everything I’ve ever wanted to do so now I just go out and enjoy myself – I’ve got nothing to prove,” said the great horseman, who once again was filled with pride when sealing victory for his country.

That pride and passion precisely mirrors the unique spirit of the jewel in the crown of the FEI – the Furusiyya FEI Nations Cup.

The next leg of the series will take place in St Gallen (SUI) on Friday 3 June. For information on the Swiss fixture, go to www.csio.ch or contact Press Officer Roman Gasser, roman.gasser@csio.ch, +41 79 635 50 05.

Show Director Eleonora Ottaviani: “What makes me really happy is that all the riders and the Chef d’equipes wanted to give priority to the Nations Cup this week, because this is our sport.”

Show President, Vittorio Orlandi: “I’m very glad that my two friends for many years, John and Michael (Whitaker), have won with their team. Congratulations to you and the young riders on your team; today’s competition was super-spectacular!”

FEI Jumping Director John Roche: “This was an outstanding performance by the British today. And the FEI is very proud to be connected with this event at this iconic location; long may it continue!”

Jessica Mendoza GBR: “This is my first time in Rome; the jumping was amazing and the course was great. I’ll be enjoying a few drinks with my team tonight!”

Ben Maher GBR: “I started riding Tic Tac in January in 1.40m classes and La Baule (in France, two weeks ago) was his first international show where we jumped 1.50m. I’m still getting to know him but he has a lot of experience and I’m looking forward to the future with him.” 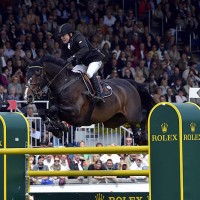 London GBR, 19 December 2010 – Emotion ran high as Great Britain’s Michael Whitaker celebrated his spectacular victory in today’s seventh leg of the 2010/2011 Rolex FEI World Cup Jumping series at Olympia in London.  The 50 year old Yorkshire-born rider was almost speechless with delight after seeing off a class field that included second-placed Irishman Billy Twomey and World No. 1 Kevin Staut from France who had to settle for third.  Whitaker choked back the tears in a post-competition TV interview – “The draw had a lot to do with it,” he said modestly, but this did little justice to the skill with which he steered his 10 year old gelding home to an explosion of applause from the ecstatic home crowd.

“The best man won here today,” declared Twomey, whose former mentor, Whitaker, has watched the Irishman steadily climb up the rankings this season.  “They say form is temporary, but class is permanent!” Twomey added, paying the ultimate compliment to the man who started him on his road to success.

UNDER-ESTIMATED
Course designer Guilherme Jorge from Brazil admitted that he had under-estimated the quality of today’s 37-strong field.  “I don’t build very often here in Europe and I know the level of the competition is very high – I should have built bigger.  The jumping here has been really amazing,” he said.