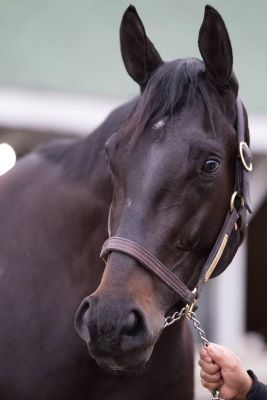 Medina Spirit’s ashes will be interred in Old Friends’ Nikki Bacharach Memorial Garden alongside such champions as Kentucky Derby Winners Charismatic (1999) and War Emblem (2002), both of whom were retired to Old Friends following breeding careers, as well as Eclipse Winner Hidden Lake and Breeders’ Cup Classic Winner Alphabet Soup.

Old Friends will host an open house Tuesday, April 5, 2022, from 12:30pm to 2:30pm to offer fans an opportunity to visit the gravesite and pay their respects to this great athlete.

Trained by Bob Baffert and owned by Zedan Racing, Medina Spirit had a short but brilliant career on the track.

A win in the GR3 Robert B. Lewis Stakes and a second-place finish in the GR1 Santa Anita Derby earned the dark bay son of Protonico a berth in the 2021 Kentucky Derby. Despite being a long shot behind favorites Essential Quality and Rock Your World, Medina Spirit went wire-to-wire against his rivals.

“The Zedan Racing family was deeply saddened by the sudden loss of our beloved Medina Spirit,” said Amr Zedan. “He brought us great joy during his time, and we will forever cherish his spectacular win in the Kentucky Derby.  Medina Spirit truly had the heart of champion,” Zedan added, “and it is very comforting to know that he will be laid to rest with many of racing’s greats and the wonderful people at Old Friends Farm.”

“To most, Medina Spirit was an over-achiever, the kind of colt who surprised the experts,” said trainer Baffert and his wife Jill. “But he would not have agreed with that assessment. He carried himself like the champion he was through all his days. From his first race to his last, he was a confident and competitive thoroughbred who always gave his best. We were lucky and blessed to have known him.

“Medina Spirit was loved deeply by us and everyone at the barn,” the Bafferts added. “We grieve his loss, but take comfort knowing he will be buried among some of racing’s all-time greats at Old Friends.”

“We’re very grateful to Mr. Zedan and Bob Baffert for allowing us the honor and privilege of burying Medina Spirit’s ashes at Old Friends,” said Old Friends President Michael Blowen. “His gravestone, which will be a constant reminder of his spectacular achievements, will be placed next to Charismatic and War Emblem in the Nikki Bacharach Memorial Garden where his legion of fans can pay their respects.”