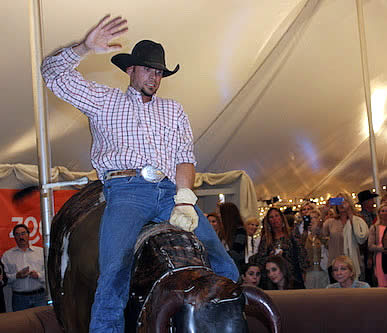 Wellington, Florida – Are you daring enough to be crowned the best bull-riding team for 2017?

Bring your team to the sometimes breathtaking but always entertaining mechanical bull-riding competition presented by the Floridian Community Bank to benefit the Vinceremos Therapeutic Riding Center.

The competition to crown the best bull-riding team begins on Thursday, January 12, at 6:30 p.m. at the White Horse Fashion Cuisine in Wellington.

Additional preliminary rounds are Thursday, January 19, and Thursday, January 26, at the White Horse Fashion Cuisine. Teams can compete in all three preliminary rounds in an attempt to qualify for the championships. The winning teams from each of the three preliminary competitions will advance to the championship round which is part of the 30th Annual Vinceremos Dinner and Benefit Auction on Friday (February 3) at International Polo Club.

Entry fee is $100 per team. To pre-register a team, please contact Bobbi Rottman at Bobbi@EquesSolutions.com or just show up ready to ride. Practice rounds are from 6-6:30 p.m. for $10 a ride.

One of the new highlights for the 2017 competition will be a Tito’s Vodka Bar featuring specialty drinks. All the bar’s proceeds will go directly to Vinceremos.

Four-person teams compete in the “Buck Off”, a crowd-pleasing, mechanical bull-riding competition where individual scores are totaled to determine the winning team of each round. Each rider is scored on the basis of traditional bull-riding rules and style and they must keep one hand in the air at all times. Extra points are given to teams for character, team “spirit” and costumes.

Spots are still available for the first round. Anyone of any age is welcome to compete. Pre-registration is encouraged but not required. Riders under the age of 18 need a parent’s signature. If you don’t have a full team of four, the “Buck Off’ crew will help find you teammates.

Bill Carter, Vinceremos CEO, is pleased with the success of the Buck Off.

“The Buck Off inspires young people and builds legacy supporters for the organization,” said Carter. “We also believe it stimulates additional community participation with helping those who ride at Vinceremos.”

About Vinceremos:
Vinceremos Therapeutic Riding Center (www.vinceremos.org) is a non-profit organization that provides equine assisted therapies for persons with varying physical, cognitive and emotional disabilities. Founded in 1982, the VTRC facility is located in Loxahatchee, Florida, directly behind Palms West Hospital. The “Buck Off” and Annual Benefit play an important role in helping Vinceremos meet its financial goals.