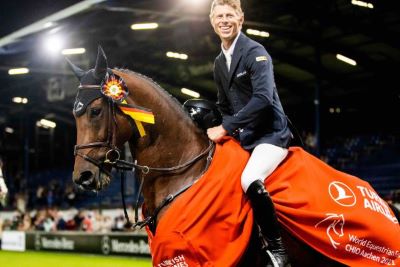 In the first round, Philipp Schulze Topphoff and his 11-year-old grey mare, Concordess NRW, set the early pace, going clear in a time of 84.86s. The German’s time was eventually bettered by both Ireland’s Darragh Kenny and his 14-year-old stallion, VDL Cartello, and Pieter Devos of Belgium and his 13-year-old mare, Mom’s Isaura, after they completed the 17-fence course fault-free in 84.37s and 84.77s, respectively.

First to go, April’s winner of the Rolex Grand Prix at The Dutch Masters, Max Kühner, set off at blistering pace, completing the shorted nine-obstacle second round course without posting a penalty in 56.36s. One by one, and without success, the remaining riders desperately tried to better Kühner’s impressive time, which looked increasingly impossible. Daniel Deusser looked to be in contention, but put the penultimate pole down, and Gregory Wathelet was eventually outdone by the last. Jérôme Guery came within half a second of the Austrian’s time, while Luciana Diniz went agonisingly close, finishing just 0.19s off top spot. When Ireland’s on-form Darragh Kenny put three down, an ecstatic Kühner claimed the win, a seemingly perfect preparation for him and his champion 10-year-old bay gelding ahead of Sunday’s Rolex Grand Prix.

Commenting on his Rolex Grand Prix strategy for his Major-winning partner, Elektric Blue P, Kühner, commented: “Tomorrow I will rest him and I will ride him on the flat a little bit. I will feel him and he will tell me what we do next. Either I will just leave him and work him until Sunday, or I will do one more small class, just to keep him a little bit in the rhythm and jumping. Sunday will be very big, so if we go all these days without jumping him, it might be too big in the beginning. He’s a very careful horse, so I’ll probably jump him in one more small round, which will keep him in the rhythm.” 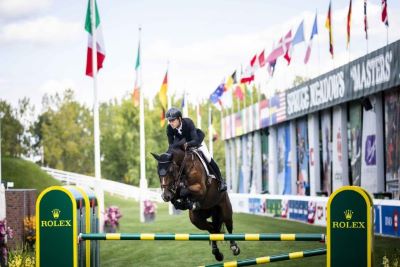 Geneva, Switzerland, Tuesday 7 September 2021 – The prestigious showgrounds of Spruce Meadows in Canada will once again welcome the world’s top horse and rider combinations for the CP ‘International’, presented by Rolex. The esteemed 5* competition, which forms part of the Rolex Grand Slam of Show Jumping, will take place on Sunday 12 September 2021, providing a spectacular finale to the five-day CSIO Spruce Meadows ‘Masters’ Tournament.

Staged in the foothills of Alberta’s Rocky Mountains, the event is widely regarded as the leading equestrian event in North America. Rolex’s affiliation with Spruce Meadows dates back to 1989 and is part of its long-standing support for the sport. For more than six decades, the brand has forged close relationships with elite international events and athletes who share its commitment to perpetual excellence.

Launched in 2013, the Rolex Grand Slam of Show Jumping is the most coveted prize in equestrianism, rewarding the rider who wins the Grand Prix at three of the four Majors in succession. To date, Scotland’s Scott Brash is the only competitor to achieve the feat, having done so in 2014-2015 with Hello Sanctos.

To aspire to the Rolex Grand Slam of Show Jumping requires a unique harmony between horse and rider, a special bond crafted over years with infinite patience, care, and expertise. Once trust and communication have been established, a pairing can push the boundaries and confront all obstacles placed before them. The bar is almost impossibly high, which is why only the finest riders keep rising to it.

The CP ‘International’ is the Grand Slam’s second Grand Prix of 2021. Max Kühner will head to the CSIO Spruce Meadows ‘Masters’ Tournament as the Rolex Grand Slam live contender following his victory at The Dutch Masters in April.

As the winner of the Rolex Grand Prix at CHI Geneva in 2019, World No. 3 and recent European Championship team gold and individual silver medallist Martin Fuchs travels to Canada with the opportunity to claim a bonus for winning two of the past four Rolex Grand Slam events. He will be joined by compatriot Steve Guerdat, who will be looking to add this title to his long list of honours, which includes individual gold at the London 2012 Olympic Games and Rolex Grand Prix victories at CHI Geneva and CHI Royal Windsor Horse Show.

Scott Brash, the current World No. 4, is a two-time Grand Prix winner at this venue, including in 2015 when he completed the Rolex Grand Slam of Show Jumping. He will return full of confidence following excellent recent results, including a victory in the Netherlands on the eve of the Tokyo 2020 Olympic Games, where he finished equal seventh in the individual jumping competition.

Canada’s Eric Lamaze will also be seeking his third Grand Prix title, at an event where he has enjoyed so much success, and Kent Farrington will join in taking on the testing course designed by Leopoldo Palacios. Farrington heads to the CSIO Spruce Meadows ‘Masters’ in top form following a successful week at the CSI Spruce Meadows ‘National’, culminating in victory in the RBC Grand Prix of Canada with his exceptional 15-year-old mare, Gazelle. 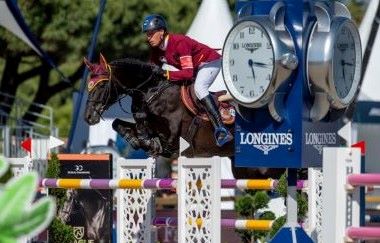 May 27, 2021 — The Shanghai Swans team, already in the lead in the overall standings provisionally, after two legs of the Global Champions League, thanks to their second place in Doha and its victory in Madrid last weekend, got off to a great start in the League’s first round in Ramatuelle/Saint-Tropez.

The team, made up of Germany’s Christian Ahlmann on Solid Gold Z and Austria’s Max Kühner with EIC Caleo, didn’t waver in light of the competition and above all their main challenger, Valkenswaard United, represented on the French Riviera by Sweden’s Peder Fredricson on H&M and Australia’s Edwina Tops-Alexander with Identity Vitseroel, second in the overall standings before this weekend, and also second in this first round in Saint-Tropez. Both of these teams jumped clear on the perfectly balanced course, designed by France’s Grégory Bodo, while five other teams finished with four faults. The St. Tropez Pirates, the ‘local team’ made up of France’s Olivier Robert (Ilena de Mariposa) and Belgium’s Pieter Devos (Claire Z), only finished thirteenth out of the sixteen teams competing in this first round with seventeen faults. 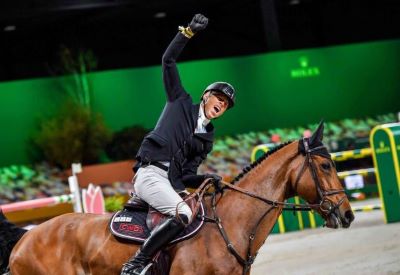 Partnered by his talented grey gelding, Clooney 51, Fuchs faced formidable opposition from a string of experienced riders, including Scott Brash from Great Britain, American Kent Farrington, current world number one-ranked rider, Steve Guerdat from Switzerland, and Frenchman Kevin Staut. Other established names, such as German trio Marcus Ehning, Christian Ahlmann, and Daniel Deusser, US rider Laura Kraut, and Peder Fredricson from Sweden, helped to make up a truly impressive list of 43 starters from 15 nations, many of whom were more than capable of becoming the new Live Contender.

With Brash and his 12-year-old gelding, Hello Jefferson, and Farrington and his 13-year-old mare, Austria 2, both retiring, Fuchs and Staut each picking up eight penalty points, and many others failing to navigate the Louis Konickx-designed course fault-free, just eight combinations progressed to the jump-off – a seven-obstacle, 330m final test of ultimate skill, determination, and precision.

First to go, Weishaupt set the early pace, jumping clear in a time of 33.71 seconds; however, his lead was short-lived, as Christian Kukuk and his 11-year-old grey gelding Checker 47 went next, stopping the clock 0.14 seconds under Weishaupt’s time. With none of the following four riders able to better Kukuk’s performance, the Grand Prix’s fate lay with Modolo Zanotelli and Kühner. The penultimate partnership to go, Kühner and his 10-year-old gelding, Elektric Blue P, set off at blistering pace, crossing the finish line over a second ahead of Kukuk, etching his name at the top of the leaderboard, where he was to remain after the 32-year-old Brazilian couldn’t quite find enough speed at the last fence, slotting into a very respectable second place.

Delighted with his performance, the new Rolex Grand Slam of Show Jumping Live Contender, Max Kühner, commented: “The Rolex Grand Slam has always been a big aim for me, so I’m very happy that it worked out today.

“I bought Elektric Blue [Elektric Blue P] when he was a two-year-old. I saw him do one free jump on a video, and I said I like him, and the auction was already running, so we bought him. He’s always done everything very well, he was always a very good horse, and he never disappointed me. He has unbelievable possibilities, as jumping is quite easy for him. He has a good character and likes to do the sport. At home he gets bored quite easily, so we have a special programme for him. We hack him and drive him to where he can climb a little bit in the mountains.

“Spruce Meadows and Aachen in September were already on my schedule. It’s still far away, but we will try to make a plan as early as possible. We will aim to take Chardonnay [Chardonnay 79] to Calgary, as he finished third in the last CP ‘International’, presented by Rolex in 2019, where he jumped very nicely. And maybe we’ll take Elektric Blue to Aachen.”