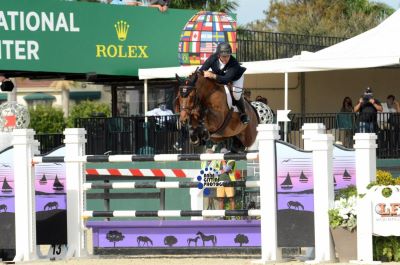 “He’s an incredible horse. He has jumped two classes since he’s been in Florida. That was two weeks ago before Christmas and he was clear in both,” Sampson said of the 2011 Hanoverian gelding by Perigueux x Cornet Obolensky. “It’s my first time in Florida, so it’s been a great start. The course was good, the first round was a long and really careful course, which suited my horse in particular because he is so careful.”

The first course that the horses and riders were tested over consisted of 13 fences, and nine duos successfully completed the first round to advance to the seven-fence jump-off. Sixth in the original order, Sydney Shulman (ISR) and Jill Shulman’s J-Boston S.E. were the first to go clear, followed by Luis Pedro Biraben (ARG) aboard his own Chacco Bumpy to force a jump-off. The seven additional riders to join the jump-off were Molly Ashe Cawley (USA), Jessica Mendoza (GBR), Jacqueline Steffens (CAN), Mac Cone (CAN), Paul O’Shea (IRL), Simon McCarthy (IRL), and Matthew Sampson (GBR).

First to return to the ring over the short course, Shulman and J-Boston S.E. were able to produce a second fault-free ride to set the pace with a time of 39.42 seconds. Mendoza and Carly Day’s Casanova 499 soon took over the lead after stopping the timers at 38.86 seconds. The duo remained in first until the last rider, Sampson, sliced a full second off of Mendoza’s leading time, piloting Paul Walker to a winning time of 37.52 seconds to secure the lead spot in the victory gallop.

“I always know that Jessica Mendoza is fast because I’ve been riding against her all our lives, so I just tried to do as much as I could without doing anything crazy to knock a fence down, and luckily it paid off!” Sampson commented regarding his plan for the jump-off. “I got six strides to the double which is quite a long distance. Jessica did seven and then I got one less stride to the last fence. Jessica did do one less stride than me to the second fence, but I think the one less stride to the double was what probably helped us out.”