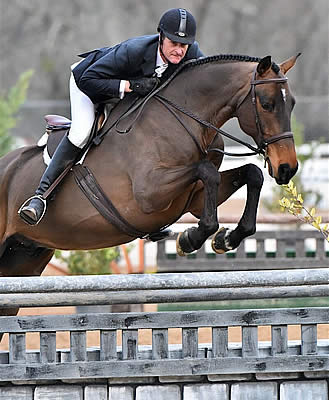 Jagger Topping and Union Jack closed Week II of the Atlanta Spring Classics on a high note as victors in the Classic Hunter Derby.

Topping, of Sagaponack, New York, tackled the two-round derby aboard Alice Keller’s Union Jack. The pair finished the classic round with a score of 79 points, before weaving their way to the handy round’s top score of 84 points. The duo ended the class with a total score of 163.

“Alice, Union Jack’s owner, kindly offered to let me show the horse this week,” Topping remarked. “It was quite a treat for me. My wife and I teach the kids, and I go to shows often, but it’s nice to be a part of the game. It’s nice for the kids to watch me ride and see me struggle and work, because they have to struggle and work too.”

Topping said the rounds built for the derby suited Union Jack’s manner of going; he described the Dutch warm blood as quirky, but honest and a great friend to have in the ring. “Both rounds rode nicely — there were great options and the courses were twisty-turny,” he commented. “Union Jack is very good at the trot fence; he’s very good at landing on that correct lead. The single jumps on a diagonal asked some questions, but the horse held his leads beautifully.”

The Atlanta Spring Classic acts as a kick-off for spring horse shows for Topping, whose wife Amanda and daughter Phoebe were also contenders in this specific event.

“This is one of our favorite horse shows,” said Topping. “We’ve been here many, many years. This is the start of spring horse showing for us, plus we look forward to coming here and getting away from the northeast for a few weeks of outdoor riding.”

Gianna Cobb, of Marietta, Georgia, ranked second for her two-round performance astride her own Allure. The pair clinched the highest classic score of 85, but their score of 76 in the handy round kept them two points behind the winners. Cobb finished the event with an overall score of 161.

The third-place ribbon was awarded to William Lyles for his performance with his own Jungle Book. Lyles, of Nashville, Tennessee, piloted Jungle Book to a classic round score of 82 points, before tackling the handy round. A handy score of 78 accrued the duo a total derby score of 160.

Amanda Topping, of Sagaponack, New York, ranked fourth. In the saddle of Yvette Rechler-Newman’s Celebration, Topping navigated the two rounds to a total overall score of 156 points. Covington, Georgia’s Cindy Ball placed fifth for her performance with Pansy Winters’ Wheels of Fortune. Ball rode the 13-year-old Hanoverian to a two-round score of 141 points. Ball also left the ring with the 1st place 3′ $250 Bonus for the Classic Derby.

Sagaponack, New York’s Phoebe Topping ranked sixth for her ride in the irons of Tracey Topping’s Perfektionist. The duo achieved an overall total of 122 points. Phoebe also received a $150 Bonus for the Classic Derby 3’3”.

Madison Winebrenner of Lexington, Kentucky ended the event in seventh place with her own App For That. Additionally, Winebrenner was awarded a $150 Bonus for the Classic Derby 3’0”.

The Sidelines Green Hunter 3’0”/3’3” ended its Atlanta circuit with Matthew Piccolo being awarded the championship title for Week II of the Atlanta Spring Classic.

Piccolo, of Thompson Station, Tennessee, was in the irons of Leland, a nine-year-old prospect owned by the L & N Group, LLC. Piccolo piloted Leland to an overall division score of 33 points.

“I’m proud of him — he had a great two days,” said Piccolo of Leland. “He’s a fun horse with a great canter; he’s very straightforward. We’re very excited about his future.

“I have a bunch of customers who buy young hunters and these green hunter divisions are a great opportunity for me to progress the horses and prepare them for my clients to ride.”

Piccolo said he’s been bringing Leland along for just under a year. He said the venue and show management for the Atlanta Spring Classic makes it a regular stop on his yearly competition schedule.

“We love to come to Conyers and usually make it here a few times a year. The courses have been great this week and the weather has been even better. It’s always better when the sun comes out and the rain stays away… And the Classic Company always puts on a great horse show, whether that’s here in Conyers, or Gulfport.”

Milton, Georgia’s Kelli Gibson took home the reserve championship for her performances across the division with Kellington LLC’s Tycoon. The duo achieved an overall division score of 30 points.

These coveted points are helping to boost Piccolo and Gibson on their way up the qualifying charts for the $30,000 Green Hunter Classic, set to run during the Atlanta Fall Classics. 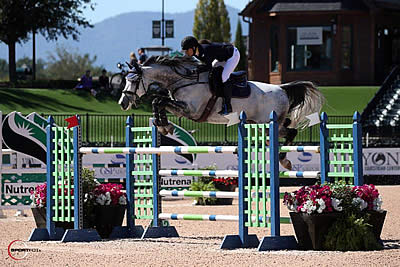 Torres Guerreiro and Alejandro tackled the short course with a time of 41.42 seconds, the only double clear round of the afternoon. Anna Christine Gansauer (ECU) and Marcia Navia’s Hot Shot Van De Hoendrikshoeve, a 2007 Belgian Warmblood gelding (Winningmood Van De Arenberg x Heartbreaker) took the second-place spot, stopping timers in 45.26 seconds, with one time fault. Luis Pedro Biraben (ARG) piloted his own Eres Tu, a 2009 Warmblood gelding, to finish in the top three on a time of 44.08 seconds and four faults.

“The course was tough enough today! I was the first one out and I wasn’t expecting it to be as technical as it was. This horse is new to me, so that added to my nerves a bit,” Torres Guerreiro explained. “He was incredible. I got him a couple of months ago, and this is my second show with him. He’s only eight, so we are learning to ride him, but he is very powerful and very strong; just very different from my other horses.”

Of the jump-off round, Torres Guerreiro said, “This was my first time asking him to go that fast. After that last jump we did lose a bit of control for a second around the turn, but I think it paid off in the end speed wise.”

Torres Guerreiro has her eye set on the FEI World Equestrian Games™ Tryon 2018, to be held at the venue next September. She commented, “He is going to be one of my top horses. I’m trying to get there with my other horse, Fifty Shades, and I think that Alejandro could also end up being a contender as well.”

Torres Guerreiro also elaborated on her time competing at TIEC, stressing the importance of such a high-quality facility and electrifying atmosphere as combinations prepare for international events and championships.

“We just come back more and more,” she said. “We have other horse shows closer to home, but we choose to come here. The footing, the stalls and barns, the horses love it and it’s like home here for them. Just when you don’t think it can get more impressive, it does.”

Matthew Piccolo of Thompson Station, TN piloted Jungle Book, owned by William Lyles, to top honors in the $5,000 USHJA National Hunter Derby with a total score of 174.5. Holly Shepherd of Grand Bay, AL and MTM Making Waves, owned by Mary Antonini, captured second place with a score of 173, while Shepherd also piloted Longstreet, owned by Barbara Risius, to third place after receiving a 166.

Piccolo and Jungle Book, a 2008 Westphalian gelding by Jazz Rubin, impressed the judges and earned a class high 85.5 in the handy round to push them to the top of the leaderboard after receiving an 81 in the first round. Holly Shepherd rode four horses in the class piloting three entries to a top ten finish on the day.