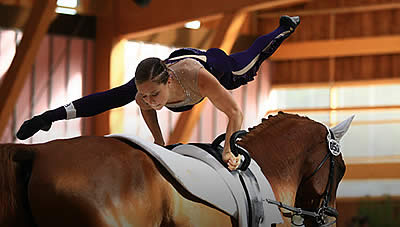 McCormick (Cañon City, Colo.), captured an astonishing seventh national championship in her star-studded career, which includes two top-five individual finishes at the FEI World Equestrian Games in 2010 and 2014. This week, she and Duke Wilhem, Sydney Frankel’s 12-year-old Oldenburg gelding, along with lunger Carolyn Bland, won the Female Gold division with a compulsory score of 7.700. She and RF Bentley, owned by Rick and Virginia Hawthorne, along with lunger Jill Palmer, scored 7.417 in the technical test, and in the freestyle she scored 7.247. Her final score was 7.455.

“Being crowned national champion is a tremendous honor that never gets old,” McCormick said. “I’m just as excited about this victory as I was with my first one. It takes a huge effort and the support from many to make it to the top, and I’m left feeling humbly grateful that I was able to do it again.”

McCormick revealed that she made a last-minute horse change when her horse pulled up sore before the competition. “It was by the grace and support of others that I was able to be successful at this competition!” she said.

While acknowledging her “good genes” with a smile, McCormick attributes her success at the top of the sport for more than two decades to her team, her training, and her mindset.

“I definitely consider my age when I’m thinking about the future, but I don’t let it get in my way,” she said. “I show up each year with an open mind, and as long as I feel like I am able to handle the physical demands and keep improving, I keep going! I love this sport and hope to compete in it for as long as possible.”

Equally dominating in the Male Gold division was Kristian Roberts (Moss Beach, Calif.), who won his fifth national championship. Roberts and Cypress Hill, Frankel’s eight-year-old Hanoverian gelding, along with lunger Carolyn Bland, had scores of 7.347 in the compulsory, and he vaulted with Palatine and Bland to a 5.852 in the technical test. With Duke Wilhem and Bland, Roberts scored 7.472 in the freestyle for a 6.890 final score.

“It was good competition,” Roberts said. “I’m excited to still be here and be at the top. This one especially means a lot to me.”

Roberts ended up competing on three different horses. His freestyle horse, Duke Wilhem, has only been vaulting for a year and he only had one week of practice with him. “He went the best he could have gone. I’m so grateful for that horse.”

Maitozo, one of the most well-known and decorated American vaulters, started the F.A.C.E. team in 2000. While he has always been a part of it, he returned to the team full-time in 2012 as the coach. The decision was made to take their junior team and compete at the A Team level after just missing the cut to qualify for the FEI World Vaulting Championships for Juniors.

“We decided that the Nationals would be our final competition and be our final goal [for the year],” Maitozo said. “It is a very nice way to end a very difficult and meaningful year for us. For me and the club, it’s always a step toward something else to see what else we can do with our momentum. We have hopes of looking to [the World Equestrian Games] next year and potentially putting a team together.”

The F.A.C.E. team is now based out of El Campeon Farm in Thousand Oaks, Calif. and Maitozo believes that has taken them to the next level. He said, “They’ve embraced us, and we’re just in heaven there. It’s helped us in the last month keeping our horses healthy and prepared. Our horses were really fit and ready. [El Campeon is] about high performance and showing the best at elite level. Now we come back as National Champions. It’s nice to do this and represent them well.”

In the Female Junior 2* division, the top placing went to Caroline Morse (Los Gatos, Calif.). She and Grasshopper AF, Jana Morse’s eight-year-old American Warmblood gelding, along with lunger and coach Samantha Matson had a compulsory score of 7.374 for a final score of 3.687.

“He’s a pretty trusty horse, and I have a lot of faith in him. I know he’s going to do his job,” she said. “My coach [Samantha Matson] was the one who trained him and made everything happen for me and him.”

After competing at the FEI World Vaulting Championships for Juniors at the beginning of August, Morse came to the USEF/AVA Vaulting National Championships with a different attitude.

The winner of the Male Junior 2* division was Jace Brooks. He and Satie with lunger Kelly Gee scored 6.549 in the compulsory for a final score of 3.275.

It was a family affair for Brooks, as lunger Kelly Gee is also his father. This was Gee’s, as well as his horse Satie’s, second competition ever. Brooks has only been working together with his father and Satie since February. It was also the first national championship for Brooks’ team, Wasatch Peak Vaulters.

“It means a lot more [to win] when it’s your dad and your own horse,” Brooks said. “I haven’t been on my own horse for two or three years, so to be with my own horse and my own lunger, it felt really cool.”

Brooks has set his next goal, to compete at the 2019 FEI World Vaulting Championships for Juniors with Satie and his father.

The OC Vaulting Club vaulters Olivia Carlucci and Allison Binckes won the Trot Pas de Deux Freestyle with a final score of 6.156. Claire Jones and Hailey Williams (Great Falls Vaulters) were second on 5.895, while Persephone Brown and Calli Ann Kennedy (Mile-High Vaulters) were third with a score of 5.761.

Schimack also took the Female Bronze Individual division on a final score of 6.732, while Marie Obeloer (Sunnyvale, Calif.) was second with a 6.640 final score and Dudley was third with a 6.294.

For more information about the USEF/AVA National Championships, go to americanvaulting.org.

Lexington, KY – Sixteen vaulters from around the U.S. visited the Kentucky Horse Park over the past weekend to compete in the CVI Kentucky and North American Young Riders Vaulting Challenge. CVIJ 2*, CVI 2*, and CVI 3* competitions were all held.

In the 3* competition a familiar face finished atop the women’s division. Mary McCormick (Woodside, CA) scored 8.041 on the Sydney Frankel owned horse Palatine. It was a good finish for the pair as they prepare to head to Le Mans, France for the World Vaulting Championships August 13-19.  The men’s individual event was won by world championship alternate George Joseph Gadd on Sydney Frankel’s Cheval.

At the 2* it was Ruthann Goodrich (Wilmore, KY) on Cheval who bested Stephanie Harris (Chantilly, VA) to win the Female individual competition. The 2* event also featured a squad competition won by USA Pack on Bordeaux Imperial. USA Pack was made up of six vaulters representing four states and was coached by Lisa Zielenske.

END_OF_DOCUMENT_TOKEN_TO_BE_REPLACED

Denver, CO – More than 300 top equestrian vaulters in the United States came together this weekend at the National Western Complex in Denver, CO for the USEF/AVA National Championships – and they did not disappoint.

“Our team competition was especially good this year, at all levels, from the lowest levels to the highest level,” said Linda Bibbler, Vice President of Competitions for the American Vaulting Association (AVA). “I was happy to see such strong representation from all parts of the country. All together the quality of the individual vaulters, pas de deux, and teams was very high.”

For the second year in a row, the Women’s Individual National Champion was Mary McCormick, one of America’s most decorated vaulters. McCormick, of Mt. Eden Vaulters, Saratoga, CA, vaulted on Sir Anthony Van Dyck (aka “Spike”) lunged by Carolyn Bland. McCormick was named USEF Vaulter of the Year in 2007 and 2009.

Next year, the AVA/USEF National Vaulting Championships will take place at the Alltech Arena at the Kentucky Horse Park in Lexington, KY, August 1-5, 2012.