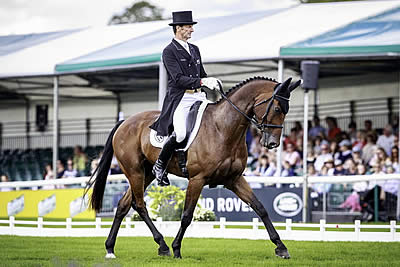 Nearly 40 years after the legendary Sir Mark Todd (NZL) first rode at the Land Rover Burghley Horse Trials (GBR) he is in the lead after dressage with Leonidas II on a mark of 36.7. In a star-studded line-up, the double Olympic champion heads the USA’s Lauren Kieffer on Veronica II by just 0.3 of a penalty, with world number one and FEI Classics™ leader Michael Jung now in third on La Biosthetique Sam.

The tall, lean New Zealander, 61, who last triumphed at Burghley in 1999, made an elegant picture on the German-bred 13-year-old, the bay gelding remaining obedient yet lively and light in his paces as well as beautifully supple.

“I may have won Burghley five times, but I haven’t won it this century! Finally, this horse is starting to grow up. When I got him as a six-year-old he was so impetuous, but now he knows what he’s meant to do and I’ve got every confidence in him.” — Sir Mark Todd (NZL), overnight leader going into cross country

Kieffer and the mare Veronica have a second place at Kentucky 2016 and 17th at Badminton this year under their belt, but it is their first visit to Burghley.

“Most of the American riders are sitting on thoroughbreds, so we’re pretty happy about tomorrow’s cross-country, but Burghley is something that’s in a class of its own and we have all studied it pretty carefully.” — Lauren Kieffer (USA), second after dressage

Two more senior riders, Andrew Nicholson (NZL), 55, on Nereo and Britain’s Kristina Cook, 46, on Calvino II, scored under 40 penalties and are in close contention in fourth and fifth places. Nicholson, currently fourth in the FEI Classics™, has also won Burghley five times, although never on the 17-year-old Nereo, his winning mount at Badminton this year.

Cook, a multiple winner of team medals, including at the recent FEI European Championships in Poland, is renowned for her skill as a cross-country rider but has never won a CCI4*, and her mark of 39.6 may give her the best chance yet.

“I don’t really do dressage in the 30s! So I’ll be going for it tomorrow. Calvino is only small-framed but he has the heart of a lion.” — Kristina Cook, fifth after dressage and highest-placed of the home side

Cook will be first out on the cross-country course on Star Witness, currently 40th after dressage.

Todd interrupted celebrations for his magnificent win at Badminton last weekend and within 24 hours was on a plane en route to Kentucky, where today he will trot up NZB Grass Valley, a horse that knows its way around the Kentucky Horse Park having been a key member of New Zealand’s bronze medal team at the Alltech FEI World Equestrian Games last year.

Both Todd and fellow traveller Mary King (GBR), third at Badminton, have said that the lure of the generous prize-money on offer in the HSBC FEI Classics is making them plan their CCI4* seasons carefully.

King, a member of Britain’s triumphant gold medal team last year, is making a two-pronged attack: she rides her home-bred mare Kings Temptress, seventh at Burghley last year, and the exciting prospect Fernhill Urco, a horse that had clocked up useful CCI3* results before spending most of last year on the sidelines.

Other overseas visitors in the 53-strong field are former (2006) Kentucky winner Clayton Fredericks (AUS) with the German-bred mare Be My Guest, third at Burghley last year, and William Fox-Pitt (GBR) and Oliver Townend (GBR) who have three HSBC FEI Classics titles between them.

END_OF_DOCUMENT_TOKEN_TO_BE_REPLACED

Lausanne (SUI), 25 April 2011 – It was a special moment in Eventing history as an ecstatic crowd at the Mitsubishi Motors Badminton Horse Trials (GBR), first leg of the HSBC FEI Classics, rose to their feet to salute the achievement of Mark Todd (NZL) in winning for the fourth time here since 1980.

“It is incredibly special, though, right up there with the back-to-back Olympic golds. When I came back to the sport (in 2008) it was to see if I could get back to top level. It has always been my aim to win another big one.”

Long acknowledged as the one of the best horsemen the world has ever seen, Todd is also the oldest winner of Badminton (after Andrew Hoy) by an astonishing eight years; he has matched Mark Phillips’ record of four Badminton victories (only Lucinda Green has more, six) and has achieved this major victory after just three years back in the sport after an eight-year “retirement”.

END_OF_DOCUMENT_TOKEN_TO_BE_REPLACED

Lausanne (SUI), 24 April 2011 – There was a thrilling climax to Cross-Country day at the Mitsubishi Motors Badminton Horse Trials – the first leg of the HSBC FEI Classics – when Mark Todd (NZL) returned to a hero’s welcome, having produced a masterful display of riding to bring the inexperienced NZB Land Vision home clear and into the lead.

However, the three-time Badminton winner and double Olympic champion will need all his renowned skill in tomorrow’s Jumping phase for, in a remarkable result, the price of one fence covers the top 12 riders.

“Land Vision is a good horse but he’s relatively young (10) and he did feel green,” said Todd, whose last appearance in a CCI4* press conference was 12 years ago when he finished second on Word Perfect.

“He definitely felt tired after Huntsmans Close and I had to nurse him home, but he felt really genuine. I had to give him a bit of a shake-up in the Quarry but he picked up and that’s the sign of a good horse.”