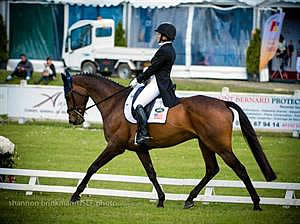 Saumur, France – Competition officially kicked off Thursday at the Saumur CCI3* with 17 combinations performing their dressage tests. U.S. entries and Land Rover Competition Grant recipients Hannah Sue Burnett and Marilyn Little rose to the occasion as they propelled themselves into the top five following the first day of competition.

Burnett (The Plains, VA) and Jacqueline Mars’ Harbour Pilot were the penultimate combination of the day but proved worth the wait as they scored 48.60 to lie in second place overnight. The 2012 USEF National CCI3* Eventing Champions have repeatedly shown a proficiency in the first phase when the stakes are at their highest and once again produced high quality work on Thursday.

“He was really good. We’ve been a little inconsistent this spring, so I rode him quite a bit this morning because he has been quite exuberant at his last two competitions. But he was all business from the first ride and went right in the ring and was rideable,” said Burnett of the 10-year-old Irish Sport Horse gelding. “In hindsight I could have gone for it a little bit more in the trot but the canter and changes were very good.”

“The course is good; it’s big and pretty technical. There are six combinations of three-strides,” said the 2011 Pan American Games Team Gold and Individual Silver medalist. “I was impressed the first time I walked it but I’ve walked it a couple more times and it keeps looking better.”

Little (Frederick, MD) and RF Smoke on the Water were the first U.S. entry of the day before the Ground Jury of Sandy Phillips, Luciano Cantini and Catherine Agaesse, immediately setting a standard for the Land Rover U.S. Eventing Team. Raylyn Farms Inc. and Phoebe and Michael Manders’ eight-year-old Wurttemburger gelding put in a polished effort to stand in fifth place on a score of 52. Heading into the jumping phases the 2012 USEF National CCI3* Eventing Reserve Champions will look to display the form that earned them runner-up honors in the CIC3* at the Red Hills International Horse Trials.

Leading the Saumur CCI3* field following day one is Geoffroy Soullez of France with Madiran du Liot*HN on a score of 46.80.

Fellow Land Rover Competition Grant recipients Will Faudree (Hoffman, NC) and Buck Davidson (Ocala, FL) round out the U.S. effort at the Saumur CCI3* tomorrow as they perform their dressage tests. Faudree will ride Jennifer Mosing’s Andromaque at 10:45am CEST, while Davidson and Sherrie Martin’s The Apprentice perform their test at 2:00pm CEST.

To learn more about the Saumur CCI3*, visit: http://www.saumur.org/cci/accueil-gb.html.