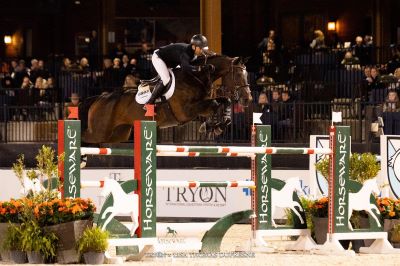 Thirty-three entries contested Michel Vaillancourt’s (CAN) course, with seven pairs advancing to the short course. Farrington and the 2012 Dutch Warmblood mare Orafina (For Fashion x Canturo) were able to produce a round that couldn’t be bested, despite some communication issues in the first round, he recapped.

“I tried a new bridle today. It felt great in the practice class, and then as soon as I went over number one, I knew that I was in trouble and it was going to be a long way around the ring. We managed to get through the first round, and then I changed the equipment a little bit for the jump off, and it was so much better.

“She’s an incredible horse,” Farrington described. “She’s lightning fast and she’s unbelievably careful. The hardest part is just the control, so that’s my limitation right now. If I can get the control, I think she will be a top horse in the world. Right now I’m still managing the controls, so I have been moving up and down in my classes. We’ll see how far I get, but on days when she’s good, it feels great.”

Orafina and Farrington have been quite a winning combination, currently ranking 6th in the FEI World Rankings as a pair. “I got her from Leon Thijssen. I’ve done business with him for over 20 years. He said, ‘I think this horse could be great, but she is very difficult, and she needs a particular ride and will be hard to train. But if you can make her go well, I think she can be exceptional.'”

Farrington has competed at TIEC consistently for the past few years, saying, “The facility here is great, especially with the upgraded footing a couple years ago. In terms of a showjumping venue, I think it’s great.”

Leading Lady Maria Gabriela Brugal Gasso was given the Leading Lady Award, presented by Marthaler Jewelers, as the highest-placing female rider in the Grand Prix. With a young – and somewhat nervous – horse beneath her, Brugal Gasso was thrilled to reach the podium and even more overwhelmed at the gift she received from the presenting sponsors.

“I have no words. I don’t know what to say! I’m just very thankful,” Brugal Gasso emphasized. “In my eyes, my horse was the best one in there. We gave it our best shot. And today, it was good enough for a lot of things. This is his last show of the season, so I think he knew it mattered. I love my horse!”