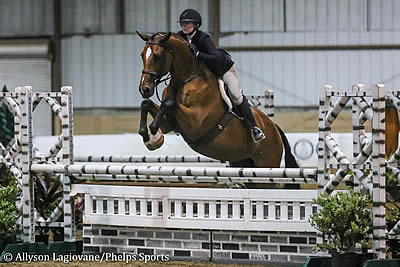 Tampa, Fla. – Sept. 2, 2018 – The 2018 Southeast Medal Finals concluded Sunday, September 2, with horses and riders returning to the Bob Thomas Equestrian Center to vie for championship titles. Coming off of a win in the Equitation Team Challenge, Camryn Halley and I’ll Say JSF, owned by Laura Barrett-Gurtis, brought home another blue as they claimed first place in the Junior Medal Finals sponsored by One K. Later in the afternoon, Marcelo Barros and Falcon Eye WB rode to victory in the $2,500 1.15m Mini Prix sponsored by CWD.

The first class of the morning, the Junior Medal Finals, drew a competitive field of young riders to the Lykes Indoor Arena. The technical course offered riders the chance to showcase their handiness and adjustability through bending lines and opportunities to take an inside track. After the first round, Halley and I’ll Say JSF led the class with a score of 83. Madison Ryan and Caprio, owned by Jai Smith Rezac, followed close behind with their score of 81. Also in contention for the top spot was third place rider Makaylah Jones riding Zeeland, owned by Alexandra Daley, with their score of 80.

For the work-off round, the judges elected to challenge riders to compete over fences. The course remained the same as round one; however, the work-off asked riders to trot the second fence, halt after the end jump, and counter-canter to the final fence. The second round could earn any of the top three riders the leading title, but it was Halley’s impressive skill in the ring that put her on top. Halley executed a flawless round and caught the attention of the judges as she was the only rider to land in a counter-canter prior to heading to the final fence. She received the top second round score of 90 to secure the first place finish with a total score of 173.

Ryan and Caprio would hold their second place position after earning a score of 81 for a total score of 162. Rounding out the top three would be Jones and Zeeland after receiving their work-off score of 80 and a final total of 160.

One of the other highlight events of the day, the $2,500 1.15m Mini Prix sponsored by CWD, attracted plenty of hopeful competitors to the Grand Prix ring for their shot at the purse. It was Barros riding Falcon Eye WB, owned by WB Equestrian Enterprise, that came out on top to earn the lion’s share of the pot. Barros was the first rider on course, going clean and setting the standard for the jump-off time with a time of 38.260 seconds.

Riders that followed would attempt to catch his speedy time, but Barros was the only rider to carefully complete a double clear round. Juan Gamboa aboard Classic Z, owned by Jennifer Gamboa, rode a faster jump-off than Barros, finishing in 35.078 seconds, but had an unfortunate rail on course. Gamboa would ultimately receive second place for his efforts. Rounding out the top three was another quick, 4-fault jump-off contender, Amy Foster riding Persimmon, owned by Leeann Ablin. Foster and Persimmon dropped the last rail on course, finishing their jump-off in 36.204 seconds.