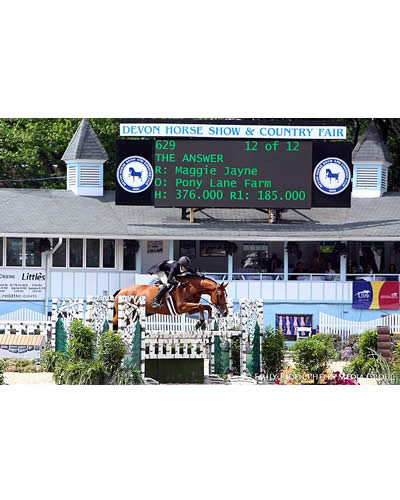 Maggie Jayne and The Answer.

Maggie Jayne and The Answer trotted into the $25,000 USHJA International Hunter Derby as the tenth in the order, took over the lead and never relinquished it, riding to the win Thursday afternoon at the Devon Horse Show.

Jayne and the 8-year-old gelding earned scores of 90 and 87 from the two judging panels, which, coupled with four high option points, gave them a first round score of 185. Thirty-two combinations followed Jayne and The Answer in the first round, including last year’s winners, Kelley Farmer and Mindful, and 2013 winners Tori Colvin and Inclusive, but none were able to touch the leading score.

Second in the first round went to Sandy Ferrell and Meralex Farm Inc.’s El Primero with a total from the two judges of 180.5 points, while Jennifer Alfano and Helen Lenahan’s Miss Lucy rounded out the top three with 180 points.

The top 12 combinations returned for the technical handy round, designed by Alan Lohman, which included numerous options for riders to display their horses’ handiness. Liza Boyd perhaps did that nearly as well as anyone. Finishing in the eleventh place position after the first round, Boyd and Sterling were the second to return for the handy round, and Boyd took a risky turn that paid off big time.

“I had nothing to lose,” Boyd said. “I was actually the only one that did the inside turn to the oxer. I made that decision when I walked the course, I just knew. I knew I had to go for it. We all go for it. If you are sitting in 11th and you know you have a horse that can do it, you go for it.”

Boyd continued, “It seemed nearly impossible, but that horse is amazing. I don’t know how he did it. He made it, and it honestly seemed easy. I don’t think I would have even tried it on Brunello. A couple weeks ago in Tryon he was second in the Derby behind Mindful, and he did all the turns that Mindful did there, so he kind of proved to me that he could do it. I took a shot, and it worked out.”

The move shot Boyd from 11th to the third place position where she would remain through to the end. No one else in the class attempted such a move, instead all elected more conservative displays of handiness, with positions staying much the same from the first round through the second round.

Ferrell and El Primero fell from second to sixth leaving the door open for Alfano who returned with Miss Lucy to deliver scores of 87 and 86 plus four high option points for a second round total of 196 and an overall score of 376. Jayne and The Answer were the last to return, with a combined score of 191 necessary to remain in the lead and take the win.

With a seamless trip delivered and three of the high option fences tackled, Jayne and Pony Lane Farm’s The Answer finished on scores of 86.5 and 85.5 for a second round total of 195 and a grand total of 380, clinching the victory.

“The horse has just been coming along so nicely,” Jayne said of The Answer. “It’s a nice notch on his belt to prove that he can do this. It’s great for his resume because it’s Devon. I got a new stock tie because we are at Devon! My other shadbelly lost a button, so the shipper left yesterday, and it came overnight in the trailer, because it’s Devon. It’s very important, and I couldn’t be more thrilled for the Thatchers and for the horse – it all came together.”

Jayne took over the ride on The Answer from her sister, Haylie Jayne Rolfe, who is expecting her first child in November. The Answer typically competes in the Second Year Green Hunters with Jayne and in the Amateur-Owner Hunters with Kelsey Thatcher.

“I started at the end of Florida, and I’ve done one show since Florida. Then we came here,” Jayne said. “He’s a blast, tries really hard and always tries to jump clean. I am having a lot of fun.”

Jayne continued, “[Haylie] was watching on the computer, and she texted me. She’s hysterical. She’s like ‘it’s the hormones!’ She’s really cute and supportive.”

The Derby on Thursday is one of only a handful that The Answer has done thus far, but competing in the derby at Devon was the perfect fit for him.

“That’s the great part about this derby, you get to show out here during the week,” Jayne said. “The horses get so comfortable. It’s very inviting.”

Finishing in second were derby veterans Jennifer Alfano and Miss Lucy who finished on an overall score of 376. After colic surgery two years ago and surgery on a keratoma in her hind foot last year, Miss Lucy is back in the show ring and in top form.

“She was awesome. It’s so great to have her back in the ring and going again,” Alfano said. “She’s a really special horse to me. Having her back really means a lot. There is not a jump you wouldn’t point her at. You don’t ever have to really give that a second thought with her.”

The $25,000 USHJA International Hunter Derby marked the conclusion of the professional hunters at the Devon Horse Show, but competition resumes on Friday with the Amateur-Owner Hunters beginning at 8:55 a.m. 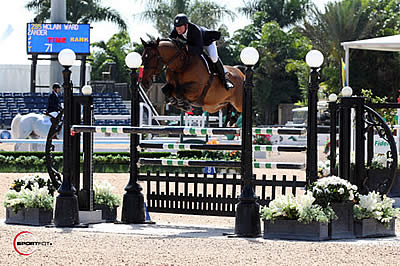 Wellington, FL – March 13, 2014 – Week ten of the 2014 FTI Consulting Winter Equestrian Festival (FTI WEF) continued on Thursday with a win for McLain Ward (USA) and Zander in the $34,000 Ruby et Violette WEF Challenge Cup Round 10. The win marks the 25th ‘WEF Challenge Cup’ victory for Ward over the years of his illustrious career.

Great Britain’s Richard Jeffery set the track for Thursday’s Challenge Cup competition that yielded 17 clear rounds of 85 starters in round one. Two entries opted out of the jump-off, and Jeffery saw eleven double clears out of 15 over the short course.

For his remarkable 25th WEF Challenge Cup victory, Ward guided his ten-year-old KWPN gelding Zander (Cantos x Saygon) to the winning time of 34.36 seconds, setting an uncatchable pace as the second entry in for the jump-off.

Try as she might, Lauren Hough (USA) was not quite quick enough to catch Ward’s time with Ohlala, finishing second in 34.71 seconds. Ramiro Quintana (ARG) and St. Bride’s Farm’s Whitney finished third in 35.59 seconds. Kevin Babington (IRL) and Shorapur placed fourth in 35.64 seconds.

“I actually think sometimes in those big jump-offs, when you know there are going to be a lot of double clears and a lot of fast horses, that is not the worst thing when you know your horse,” Ward said of going early. “The other night in the grand prix I went late, and I was trying to do something impossible. Today I just kind of rode my round. I know he is a quick horse. I had a few nail biting moments; Lauren was close, but it worked out in our favor.”

“I have a very big stride. I think I have a bigger stride than Lauren (with Ohlala),” Ward detailed of his winning round. “I was able to do four strides to the skinny and then I had a good rollback. It showed up well. She lost her horse a little bit on the rollback, but it was a hair.”

This is the first class that Zander has won during the 2014 season, but Ward feels like he is finishing out the winter well. “He had a little bit of a rough start to the circuit. He had a small injury and we were just a little behind, but the Nations Cup week he was great,” Ward noted. “He was second in the WEF (that week) and had other good ribbons. The last three shows, he has been really solid and seems to be in pretty good form, so we will try to keep going in that direction.”

Ward also commented on the difficult job for Richard Jeffery, who had 96 starters in the class originally (85 showed). “Richard did a good job,” Ward acknowledged. “It is a tough thing. It is tough for the riders, and it is tough for the course designers. It’s supposed to be a 3*, but you have 90 plus entries, and I thought it was smart. It was difficult, hard to jump a clear round. When they see 17 clear, they think it must have been easy, but 17 clear out of 96 isn’t a very high percentage. He didn’t over tax them as well, you didn’t see a lot of large, large scores, so I thought he got it pretty good.”

An $8,000 G&C Farm 1.45m was also held on Thursday with a win for Eiken Sato (JPN) and Stephex Stables’ Soory de l’Hallali. Jumper competition continues in the International Arena on Friday with the $34,000 Spy Coast Farm 1.45m.

Maggie Jayne of Elgin, IL, and Pony Lane Farm’s Fredrick bested the Perfect Product High Performance Hunter division on Thursday morning at the FTI WEF. The pair were neck and neck with reserve champions Point Being and Kelley Farmer, who finished just four points behind Jayne and Fredrick.

Jayne has ridden Fredrick, a nine-year-old Belgian Warmblood gelding by Couleur Rouge, for nearly three years and is quite pleased with his early success in the high performance division.

“This is the second week doing high performance, and he’s been really good at it. He likes the bigger jumps,” Jayne explained.

Fredrick also pulls double-duty in the junior hunter ring with Madeline Thatcher, an easy adjustment for the laidback chestnut. Jayne admitted the gelding can have a lazy streak, so the bigger jumps earlier in the week don’t light him up before Thatcher takes over the ride.

“He’s beautiful and he moves well and he jumps well, and he’s quiet and relaxed. He’s the total package!” Jayne described. “He can be a touch spooky, but I think that makes him jump carefully.”

Fredrick’s spooky side showed itself a bit in Jayne’s first course on Friday, but it didn’t affect them too much; the pair placed second with an 88. They came back for the final course and laid down a high score of 90, which Thatcher noted was one of their better scores together.

“This is only the second week we’ve done the high performance, and it’s definitely our best score in that. He’s normally pretty consistent by the second day. The last class is usually his best class,” Jayne pointed out.

She continued, “I’m just happy that he’s stayed so consistent over the years, and he’s going to have a bright future. He’s so easy [to ride] and so easy on himself.”

Fredrick has easily stepped up the challenge of higher fences, and his niche is more conventional hunter classes. Fredrick will continue to compete in the high performance hunters with Jayne as well as step into the ring with Thatcher as her trusted junior hunter.

Competition for week ten of the FTI WEF, presented by Horseware Ireland, will continue on Friday, March 14, with the Camping World Adult Amateur Hunter 51 & Over division, Section A, in the E. R. Mische Grand Hunter Arena at the Main Grounds of PBIEC. For full results, please visit www.showgroundslive.com.

The WIHS continues through Sunday, October 31. The highlight classes of the week are the $25,000 Puissance sponsored by The Boeing Company on Friday, October 29, and the $100,000 President’s Cup Grand Prix presented by Washington Convention and Sports Authority, CSI 3*-W on Saturday, October 30.