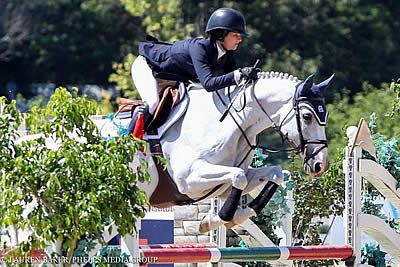 Lexington, KY – Aug. 7, 2016 – On Sunday, 22-year-old Lindsey Tomeu added a sixth consecutive win to her summer streak of success with a victory in the Adult Jumper Classic aboard DBHC, Inc.’s Bonapart. In the Children’s Jumper Classic, it was Madeline Derose and Aberdeen Ventures LLC’s Jorno who bested the field of 32 to take home the win.

Tomeu and Bonapart were the last combination to attempt the course, and turned in a clear round to advance to the jump-off. Contesting Michelle Newman and the UK Equestrian Team’s Royal Blue lead, Tomeu and Bonapart shaved a full two seconds off the leading time to take over the lead in 31.103 seconds, leaving Newman and Royal Blue in second.

“It feels amazing to have won this class; we’ve had an incredible summer so far,” Tomeu said. “Bonapart is so special; he’s almost unstoppable. Today we originally planned to take a tighter inside turn to fence 10 in the jump-off, but he’s quick enough on his own, so we went wide instead. I’m happy we did, because it was a dicey turn. He’s always looking where he’s going, so once you do the first turn he has an idea. You have to think a little faster than him.”

Tomeu said she has had Bonapart, who is now 15, for two years, and considers him to be her horse of a lifetime. The duo recently earned reserve champion in the Adult Jumpers at the Devon Horse Show, and also had wins at Country Heir and the Great Lakes Equestrian Festival.

“This is my third summer with him, and we’ve formed an incredible bond,” Tomeu said. “He really is my horse of a lifetime, and I don’t think we’ll ever be able to replace him. He’s been there, done that. He’s won NAL Finals two years in a row; he’s just amazing. Today is our sixth Classic win in a row, which marks a record for me now. I couldn’t be happier with him.”

Tomeu is based in Lexington, Kentucky for the summer, and trains with Shane Sweetnam and Ali Oakley Sweetnam at Sweet Oak Farm.

“We love Kentucky,” Tomeu said. “It just doesn’t get any better than this.”

Earlier in the day, the Children’s Jumper Classic took the stage in the Rolex Arena. Madeline Derose and Jorno were one of seven horse-and-rider combinations to go clear in the first round and advance to the jump-off, which they completed faultless in a time of 33.097 seconds. Second place went to Sophia Zuckett and Stephanie Novas’ Aretina M with a time of 35.281 seconds.

“In the jump-off, we took two inside turns that helped us save time,” Derose said. “It feels great to win with him. I’ve won one other class on him at a smaller show, so it feels really good.”

“Jorno is so awesome for a 7-year-old,” Derose said. “I’ve only had him for a little while, but he’s been going really well. When we saw him going around at HITS, Aaron said, ‘I think that’s the one for you.’ He’s great; he’s super scopey, so that’s nice. He has a big stride, but he’s really collectable.

“I love showing here,” Derose concluded. “The facility is amazing. It’s really cool to go in the Rolex Arena, and it’s nice to be able to go around in a bigger ring like that.”

Jane Gaston of The Plains, Virginia and her 9-year-old imported Dutch Warmblood gelding impressed the judges in the Amateur-Owner Hunter division and the pair earned the division championship on the final day of the Kentucky Summer Classic Horse Show.

“I am pretty happy with him,” Gaston said. “He is a really consistent horse. He is a good sport, so whatever they put out there I know that I have a good shot with him. He is such a good horse!

“Because has a big slow step, I never have to hurry. He has a huge range so your options are endless. He doesn’t mind getting deep or long, and he is kind about either spot. He is very adjustable.”

Prior to Gaston purchasing the talented gelding in February from Daniel Geitner, Because was originally a jumper in Europe.

“When Daniel [Geitner] started riding him he thought he would excel in the hunter ring,” Gaston explained. “He went right into the hunter ring like he had been practicing all his life!”

The pair competed throughout the Winter Equestrian Festival in Wellington, Florida and they were champion or reserve champion during most weeks in the Amateur-Owner division.

Though they had a stellar winter season, their competition schedule has not gone as smoothly as they had originally planned. Gaston’s goal was to qualify for Devon, which they accomplished, but an unfortunate fall from another horse left Gaston with a broken collarbone that required surgery.

Though Gaston had a two month setback, she geared up better than ever at the beginning of summer and has been consistent winning tricolor ribbons. Her first show back in the saddle was at Lamplight Equestrian Center where she earned her division championship.

“I could not have had a better start back horse because he is so kind and gentle,” Gaston explained. “When I was a little iffy coming back, he was the perfect horse.”

On Sunday, Gaston won the under saddle class and the handy round, so with the addition of her wins form the previous day she clinched the Amateur-Owner Hunter Championship.

“In the handy I thought he was really good,” Gaston said. “There was one inside turn I decided not to do because I knew that a few riders had a rub there. I thought if I had a rub up to that point I could add the inside turn, but my round was going well and I wanted to be smooth through to the end.”

Gaston trains with Larry Glefke and Kelley Farmer, who are based in Lexington, Kentucky in the summer and Wellington, Florida in the winter months. Farmer competed Because in the first week of the Kentucky Horse Show LLC’s summer series and won the Green Hunter Championship.

“They were not here today because Kelley just won the $100,000 International Derby at Saugerties!” Gaston laughed. “Vanessa Brown, who works for Larry, and Debbie Buchanan helped me today. We had our instructions, we followed them and it all was good.”

Gaston and Because continue to add more tricolor ribbons to their collection, but her main goal is to stay healthy the rest of the summer season so they can compete in the indoor circuit.

“Thank you to my whole team who kept him going and helped him be prepared while I was off for two months,” Gaston explained. “It was hard to get going, then have a break from my injury, and then to get him going again full speed. They prepared him beautifully!

“I love showing at Kentucky,” Gaston concluded. “It is one of the most consistent rings and everything is high quality; the stabling, the footing, the courses. It’s a place I always look forward to coming to.”

In the Amateur-Owner Hunter 3’3″ division, the top quality of the field made the judges opt for a California split. In Section A, Kristen Schnelle and Calena were crowned champions and Didi Mackenzie earned the reserve champion ribbon on MTM Do Right.

In Section B of the Amateur-Owner Hunter 3’3 division, Brittan Bailey and Jackman earned the tricolor ribbon and Lisa Butzer on Boca’s In Pursuit earned the reserve championship.

Bailey splits her time between West Palm Beach, Florida and Dallas, Texas, and she has owned the 10-year-old gelding for two years. They earned two blue ribbons, one in the handy and the other in the second hunter round, to clinch the section championship.

“My rounds were really great,” Bailey said. “I’m really excited for our consistency and I’m so pleased with him. We have come a long way since I’ve had him. It’s been a great partnership to bring him along. Win or lose he is so fun to show, but winning the division makes it even better!

“His favorite thing is to come to a show,” Bailey continued. “He loves his job. I know when I go out there I can always count on him.”

This is the first championship ribbon the pair has earned in an amateur division during Kentucky Horse Show LLC’s series. She enjoyed the handy course because it allowed her to show off Jackman’s handiness while maintaining a smooth round.

“I have a demanding professional job as CFO of Transworld Business Advisors, so it makes it even more exciting that I can put it all together for a show and balance everything,” Bailey concluded. “It’s a challenge of being an amateur, but it’s exciting when you can succeed!”

The Kentucky Summer Classic will wrap up on Sunday to make way for the 2016 United States Pony Finals. The Kentucky Summer Horse Show Series will resume on August 16 with the start of the Bluegrass Festival Horse Show, which will feature both the USHJA International Hunter Derby Championship and the USHJA Pre-Green Incentive Championship. Other highlight events include the $5,000 Hallway Feeds USHJA National Hunter Derby, the $25,000 Hagyard Lexington Classic and the $40,000 Bluegrass Festival Grand Prix, sponsored by Audi of Lexington.