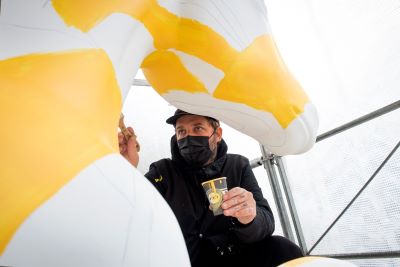 To mark its 100 year milestone, the FEI has invited French graffiti artist Ludovilk Myers to transform the statue of the White Horse, located on the outer façade of the FEI Headquarters in Lausanne, into a one-of-a-kind urban art intervention.

The FEI kicked off its year-long centenary celebrations in May 2021, with a video highlighting the achievements, successes and milestones of the organisation and the sport.

“We have been looking for a unique way to celebrate our centenary year and it was natural that the White Horse become the focal point,” FEI Secretary General Sabrina Ibáñez explained.

“Equestrian sport is unquestionably about the ‘love of the horse’ which binds together our athletes from different disciplines. But our noble friend, the horse, has also always captured the imagination of artists around the world, for their movement, grace, and beauty. And this is why we’re pleased to welcome the very talented Ludovilk Myers who, like our equine partner, is in his element when carrying out his art in the great outdoors.”

Ludovilk Myers, was born in the Seine St. Denis district of the Paris suburbs where he lives and works today. He started writing graffiti in Paris in 1998, taking his inspiration from the geek and street culture that defines the French capital.

Myers’ playful art, scattered with funny shapes and colours, stands in opposition to the darkness that we sometimes experience in our everyday world. His unique style earned him a position as ambassador for Converse Cons in 2014, and accolades for his design of the iconic Timberland Yellow Boot in 2016. His exhibitions in Paris, Zurich, Munich, and other European cities continue to gain attention.

The FEI was created in 1921 and was headquartered in Brussels, Belgium until the 1970s when it moved to Bern, Switzerland. The FEI moved its headquarters to Lausanne in 1991, but the current building, now located next to the Délices metro station in Lausanne, was officially opened in 2011.

The building, a gift from former FEI President HRH Princess Haya, was thoroughly renovated in accordance with the Swiss MINERGIE® construction standard for environmental responsibility, reducing energy consumption by 25 percent. At the time, only two percent of renovated buildings in Switzerland met the high Minergie standards.

“The city of Lausanne, which has housed the FEI’s Headquarters for 30 years now, has become an integral part of the equestrian family’s identity and character over the past decades,” Sabrina Ibáñez said.

“This is why we also wanted to involve the local Lausanne community in our celebrations. Just as street artists make their work more accessible to people by using urban settings as their canvas, sport also aspires to being universal. We hope this urban art intervention will be a unique introduction to equestrian sport, and that more people will discover the beauty of our sport as a result.

“And if you decide to ride the Lausanne metro to get to the FEI’s Headquarters, make sure you listen carefully as the train pulls into the Délices station!”