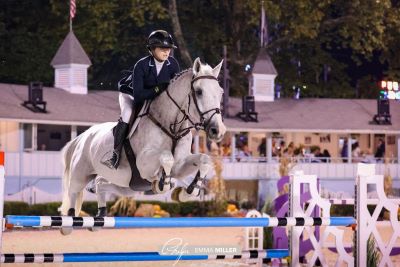 Devon, Pa. – Sept. 18, 2021 – The stadium surrounding the Dixon Oval at the Devon Fall Classic was packed with spectators from near and far in anticipation of the weekend’s highlight event, the $25,000 Devon Fall Classic Grand Prix. With the high energy of the night, Kaitlyn Williams and Cassio Melloni rode quickly and carefully to beat out the competition and wrap up the evening with a victory gallop around the arena.

For additional information, please visit our website at www.DevonHorseShow.net. 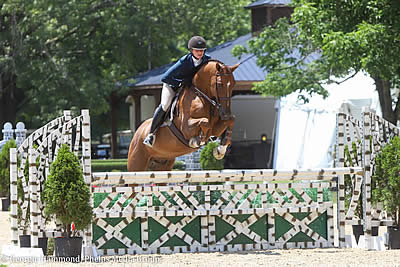 Lexington, Ky. – July 24, 2020 – Equitation competition took center stage in the Stonelea Ring at the Kentucky Horse Park Friday, July 24 for the Kentucky Summer Horse Show. Showcasing junior talent, a number of medal classes and equitation divisions filled with a hefty number of entries as athletes made their efforts to garner valuable points toward the 2020 indoors season finals. Making her mark in the ASPCA Maclay, Ellie Ferrigno walked away with the blue, while Lola Head won the USHJA Hunter Seat Medal and Samantha Takacs won the Hamel Foundation NHS 3’3″ Medal.

Lucy Matz and Quetal Are Smooth and Speedy in 1.30m Jr/AO Medium Jumpers

A field of 27 junior and amateur-owner jumper competitors entered the Rolex Stadium on Friday afternoon to contest Bobby Murphy’s 1.30m Junior/ Amateur-Owner Medium Jumper course Friday afternoon at the Kentucky Summer Horse Show. Despite rain showers earlier in the week, the sun was shining bright, setting a beautiful backdrop for the day’s competition lineup in the famed Rolex Stadium. Topping the large and competitive field was Lucy Matz aboard Dorothy Matz’s entry, Quetal, who delivered a quick and tidy jump-off round to secure the win. 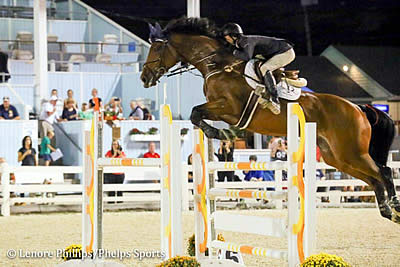 Laura Chapot and Out of Ireland.

Devon, PA – September 15, 2017 – Horses and riders returned to the Dixon Oval for another shot at the prize money for the 2017 Devon Fall Classic. Both the $5,000 Speed Stake and the $1,000 High Junior/Amateur-Owner Jumpers were run as pure speed classes, pressuring competitors to lay down a quick and clean first trip. The largest check of the night ultimately went to Laura Chapot, who piloted Out of Ireland to the winner’s title in the $5,000 Speed Stake. Lucy Matz and Bailey VI bested the field in the $1,000 High Junior/Amateur-Owner Jumper class to ride away with the blue ribbon as the leading pair.

Capping off the evening under the lights as the most prestigious class of the day, the $5,000 Speed Stake challenged each contender to ride an effective trip over the 1.40m fences faster than the rest of the pack. Course designer Paul Jewell proposed a lofty series of obstacles to the horses and riders, proving no issue for Chapot and Out of Ireland, owned by The Edge, who blazed through the track in the unbeatable time of 60.446 seconds as the third to enter the ring. Though a series of competitors managed to keep all the rails in the cups for clean trips, none managed to surpass Chapot and Out of Ireland’s clean time except Chapot herself, who nearly outdid herself in the class aboard Mary Chapot’s Zealous. As one of the last to go, Chapot and Zealous laid down a strong performance and the quickest trip of the night in 59.971 seconds, the only pair to break 60 seconds, but unfortunately Zealous clipped the jump standard on a tight turn, toppling the rails to accumulate 4 faults against them.

Ibrahim Barazi and IB Stables’s Softbeat took their turn around the track two trips later, and it appeared that Barazi and his mount may give the early leaders reason to worry until a rail fell near the end of the course, with the pair finishing on 4 faults in a quick 61.125 seconds, the only pair at that point to come within a second of Chapot and Out of Ireland. The second-to-last to go, owner-rider Pablo Mejia and RL Queen Mary looked to pose the greatest threat to Chapot, crossing the timers in a nail-biting finish with all the rails still up, but unfortunately just a half-second too slow in 60.913 seconds, securing Chapot and Out of Ireland’s spot atop the scorecard.

Mejia and RL Queen Mary nabbed the second position behind Chapot and Out of Ireland in the victory gallop, followed by Barazi and his own Omnia Incipit, who finished in a clean 64.183 seconds to claim third position. Chelsea Babcock and Da Vinci, owned by Empire State Equine Sales, LLC, claimed fourth place with a clean time of  66.571 seconds, and Willie Tynan Red Barn Farm, LLC’s KEC City Limits rounded out the top five with their time of 67.228 seconds.

Earlier in the evening, Matz and Bailey VI, owned by Dorothy Matz, made their mark on the 2017 Devon Fall Classic with a win in the $1,000 High Junior/Amateur-Owner Jumpers. Matz and Bailey VI coasted around the track in a speedy 63.950 seconds, leaving the course intact and setting the standard for the remaining athletes. Three seemed to be a lucky number as, just like Chapot, Matz rode third in the order of go. Jesse Smith and her own Charles Pinckney Windsor Z gave the early leaders a run for their money with their clean ride, but tripped the timers a bit too slowly in 64.518 seconds. With only one pair left to ride, Matz and her mount’s time still stood at the top of the leaderboard as Cynthia McGrath and Mapledale Associates, LLC’s Quinaro, who won the High Junior/Amateur-Owner Jumper class, entered the ring. Though McGrath and the towering Quinaro navigated the course faster than any other entrants, stopping the clock in 63.704 seconds, Matz and Bailey VI remained unparalleled as McGrath and her ride rolled rails to drop to fourth position overall.