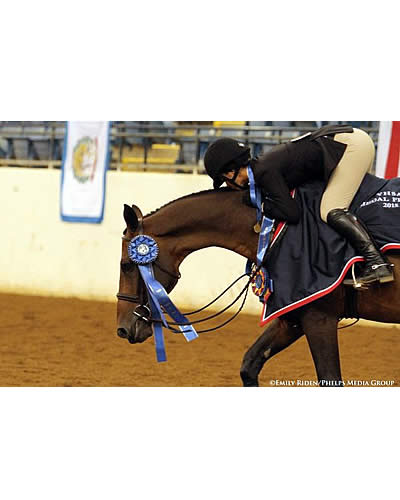 Lexington, VA – August 10, 2015 – Mary Elizabeth Cordia has been competing in the Virginia Horse Show Association (VHSA) Finals for several years, leaving nearly every time with an impressive second place finish. However, until this year a VHSA Finals victory had escaped the young rider.

On Saturday night, the 17-year-old from Alexandria, Virginia, finally got her big win, topping the field to win the VHSA/EMO Hunter Seat Medal Final at the Lexington National Horse Show.

In addition to marking Cordia’s first VHSA Finals victory, the 2015 Lexington National Horse Show at the Virginia Horse Center (VHC) boasted the highest entry and attendance numbers on record for the August horse show, with stall sales up by more than 100 from 2014.

“The results should be rewarding to the Board and, of course, to our wonderful staff for the amazing ‘turn around’ over this past year,” said Ernie Oare, president of the Virginia Horse Center Foundation board. “It has been a journey with a lot of turns, and with the help of the Lexington community, we are now in the home stretch.”

Oare and fellow members of the VHC leadership team, including Chief Executive Officer John Nicholson and Chief Operations Officer Leigh Anne Claywell, sat ringside amongst the crowd in Anderson Coliseum on Saturday night and watched as Cordia laid down a seamless round and test to win the VHSA/EMO Hunter Seat Medal Final champion title.

From the original starting field, four riders were called back to execute additional testing. Returning riders, ranked in order from fourth to first, were: Casey Schmitz, Darby Cole, Grace Boston and Cordia.

Each rider executed a test that included a hand gallop directly to an oxer, followed by a tight rollback past the in-gate to a trot fence. From there riders executed another tight rollback to a vertical-oxer two stride, before turning to the left to take a vertical set on the rail. Immediately following the vertical, riders were asked to halt, canter directly to an oxer set across the diagonal and then return to the line-up at a loose rein walk.

“I was a little bit worried about the halt because that’s definitely our weakest point. Sometimes he just decides that he doesn’t want to stand. I was happy when he agreed with me when I asked him to do it!,” Cordia said of Thrift Shop, her winning mount, a Dutch Warmblood gelding owned by Fairfield Farms.

Cordia nailed the halt as well as all other parts of the test to cement her spot as the winner. Finishing in second was Darby Cole, while Grace Boston took the third place spot.

“[Thrift Shop] is just a phenomenal horse. I can ask him to do anything that I want, and he’ll just say yes. It’s a great feeling,” Cordia concluded.

For Cordia, who now trains with Will Meierfeld and Alison Robitaille, coming to the Virginia Horse Center to compete is like coming home.

“I’ve been showing here since I was 7 years old so it definitely feels like home when you’re here,” Cordia said. “It’s really nice to be in a place where it’s very friendly competition. It’s great because everyone is your friend because you hang out with them every weekend.”

One of those friends, and now a fellow VHSA Finals winner, is Elizabeth Bailey. On Saturday night, Bailey beat a field of 26 qualified entries to claim the victory in the VHSA Championship on the Flat.

After the full class had demonstrated the walk, trot, extended trot, sitting trot and canter in both ways of the arena, judges split the field in half to ask riders to show at a counter canter in both directions. From there, the field was narrowed down to the top nine for additional flatwork.

The top contenders returned to the rail, where they executed all gaits and dropped their irons as judges pulled riders one by one in to the center until only Bailey remained victorious on the rail. Bailey’s equitation remained solid through to the end of the lengthy testing, as did her mount Acido 7.

“He used to get tired and lazy and heavy, but he’s built up a lot of muscle and stamina now, so it’s less that he gets tired and more that he gets upset. You have to start staying out of his way,” Bailey explained. “We got toward the end, and he was a little like ‘Can I leave with the other horses?’ I kind of stayed out of his way, and he held it together. He was perfect and really nice and rideable.”

Bailey, who trains with Gordon Reistrup, continued, “I’ve been showing here my whole life, so it’s really just like coming home for me. The stalls are nice; the rings are nice. They do a good job putting the shows together. The courses are great, and all of the people are so great. It’s nice to have such a big, nice facility right in my backyard.”

Saturday evening’s final award, the Walter J. Lee Perpetual Trophy, was presented to Casey Schmitz as the winner of the VHSA Horsemanship Championship. The VHSA Horsemanship Championship is a three-phase competition designed to reward young riders who best show expertise in a combination of equine knowledge and riding ability. Riders were scored based 10 percent on a written test, 40 percent on a practicum and 50 percent on their VHSA/EMO Hunter Seat Medal Finals score.

VHSA Medal Finals competition at the Lexington National Horse Show concluded on Sunday with the VHSA/EMO Adult Medal Finals. Riding away with the win was Cary Hundley, and second place went to Emily Williams.

To learn more about other upcoming horse shows and events at the Virginia Horse Center, visit www.horsecenter.org. 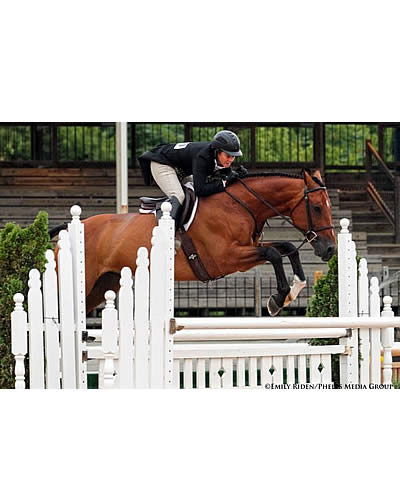 Lexington, VA – August 8, 2015 – Betty and Ernie Oare just purchased Attila a month ago, and Winn Alden only sat on the gelding for the first time on Friday, but following the $2,500 USHJA National Hunter Derby at the Lexington National Horse Show, the owners, rider and talented gelding seemed every bit the veteran winning team.

In their first time in the show ring together, Alden and Attilla bested a field of 37 other horses to win Friday evening’s national derby, held at the Virginia Horse Center and generously sponsored by Chatham Hall.

“Winn hadn’t shown him at all, and she jumped up and did phenomenally here,” Betty said. “She gave him a beautiful ride. She had two other really nice horses in there tonight, very competent horses that can win in any company, so we were proud of the win tonight. She did a fabulous job.”

“I was really nervous riding for the Oares here!” Alden laughed. “I was nervous because I know [Attila]’s a good horse. They didn’t put pressure on me. I put pressure on myself. My other two in the class had little mishaps in the handy round, so he was my last chance, and he really came through.”

Alden and Attilla picked up an early lead in the class, earning the first round high score of 89 over the Glenn Moody designed course, but their lead would not go uncontested in the second round. Amy Nunnally and Cailler, owned by Carilynn Peyton, had finished the first round on a score of 84.25, but in the second round, they earned the highest score of the class: a 93 including the four high option points.

Their handy round efforts shot Nunnally and Cailler to the top of the leader board with a score of 177.25 and put the pressure on for Alden as the final rider to return. With a second seamless round utilizing all four high option fences, Alden and Attila clinched the victory with a handy round score of 92 and an overall total of 181, while Nunnally and Cailler finished in second.

“It was fun to watch Amy [Nunnally],” Alden said. “She’s my good friend, and she’s been a good friend for a long time. We’ve been in this situation before where she’s put in a really good handy round, so I had to step it up to stay ahead of her. At Deep Run she got me and I ended up behind her, so here I got to stay up front. It’s fun when someone puts the pressure on you like that.”

“I really enjoy coming here; I’ve been coming here for a long time,” Alden said of the Virginia Horse Center. “Leslie Brown is such a great person and a great manager; Andrew [Ellis] is always great to work with, and Sarah [Jackson] is one of the best in-gate people around.”

Classes like the $2,500 USHJA National Hunter Derby at the Lexington National Horse Show would not be possible without the support of generous sponsors including Chatham Hall. The all-girls college preparatory boarding school’s riding program offers forward seat fundamentals woven with modern hunter and equitation styles in accordance with horsemanship. Chatham Hall Riding strives to create the multitasking rider of today, making the school one of the top equestrian boarding schools in the country. Learn more about the Chatham Hall riding program online at www.chathamhall.org.

Sarah Boston, 15, worked hard throughout the year to qualify for the Virginia Horse Show Association (VHSA) Children’s Hunter Seat Medal Final, so when she broke her foot a few weeks out from the final, she was not going to let that stop her.

On Friday night at the Lexington National Horse Show, Boston, with broken foot and all, topped the field of 36 other qualified entries to win the 2015 VHSA Children’s Hunter Seat Medal title.

“I didn’t get cleared until Tuesday to ride,” Boston, of Owings Mills, Maryland, said. “It feels really good [to win], especially because I just started riding my horse again [after the injury], and he really just took care of me. He’s perfect.”

Boston, who trains with Amy and Streett Moore at the McDonogh School, and her mount, Royal Ace, were one of six pairs from the initial starting field called back to execute additional testing over fences. With a well-executed test, Boston moved ahead from the third place position to take the win. Finishing in second was Lekha Ramachandran of Greensboro, North Carolina, and taking the third place award was Madison Busey of Ashburn, Virginia.

While the VHSA Children’s Hunter Seat Medal Final is complete for Boston that does not mean that the young rider is going to take more time off from her injury. Next weekend, she will head to Culpeper, Virginia for the Tad Coffin Junior Equitation Finals.

To learn more about the Virginia Horse Center and the Lexington National Horse Show, visit www.horsecenter.org.