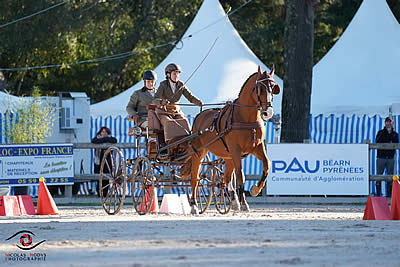 The drivers on the starting list for the CAIO 4*-H1 at the Pau 5-star event competed in the cones competition, the second test in their triathlon. Finnish driver Leena Kalalahti with Judym in hand was the fastest of the flawless rounds, taking first position for this test and climbing from 34th to 24th in the provisional ranking.

Despite moving up ten places on the provisional leaderboard, Kalalahti’s win does not change the provisional podium after the dressage and cones. Belgian driver Laure Philippot also completed a flawless round and maintains her first place, just ahead of Fabrice Martin who clocked up a 0.57 point-penalty and Dutch driver Rudolf Pestman who came in third, having also driven a clear round.