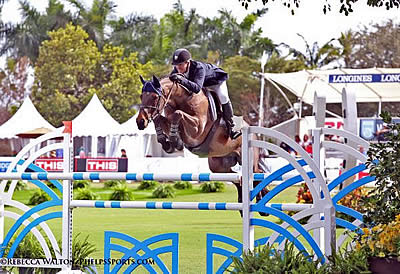 Wellington, FL – Feb. 4, 2016 – The saying “if you build it, they will come” rang true on the opening day of the CP Wellington Masters, presented by Sovaro™. Deeridge Farms, owned by the Jacobs Family, opened up its private facility to an international field of horses and athletes for the inaugural event, which began with the $35,000 Welcome Stake. Forty-eight of the world’s top athletes competed for the top honors, but it was the USA’s McLain Ward that sped to victory with his veteran mount HH Carlos Z.

The Jacobs Family and Stadium Jumping began preparing Deeridge Farms for the inaugural event months in advance, and their hard work showed with beautiful fences set on the Hollow Brook Wealth Management Grand Prix Field in front of the two-story Taylor Harris Club. The venue has a European feel catering to both spectators and exhibitors, and Deeridge Farms provides the perfect background for the world-class event.

Alan Wade designed the inviting track for the day’s $35,000 Welcome Stake, which included two double combinations for the timed first round event. Twenty-three of the entries completed the course without error in preparation for Sunday’s main event, the $200,000 Longines FEI World Cup Jumping Wellington.

Ward and HH Carols Z, owned by Double H Farm, went seventh in the order, producing a clear round in 60.29 seconds, blazing an early path to victory.

“It helps in that situation when you go early because you kind of ride your round and let the others chase,” explained Ward. “There were a few that were close at the end and then a little mistake happened here or there. That’s nice when it works out like that.

Ward added, “Carlos is just fast. Normally you can ride just a nice, neat round, and he’s either going to win or be close. I didn’t feel like I flattened him out with Sunday in mind.”

Fortieth in the order was Mexico’s Alberto Michan riding Dutch Cinda Alba Z for Ilan Ferder, who was just one second behind Ward with a faultless effort in 61.13 seconds, which would be good enough for second place.

“We were going to try to go for the class,” said Michan. “I think she’s fast, and we made the plan. She’s only 9, and she just moved to the big international classes. This is her second week jumping 1.45m, but she does it super easily. She’s very nice to ride, and I’m very happy with her.”

Michan continued, “[Deeridge Farms] is a beautiful, beautiful place. I came yesterday and saw the place for the first time. It’s as beautiful as anywhere in the world to ride. The grass was fantastic. I think it’s a nice footing because it has a lot of sand in it, and the horses have good balance.”

Double H Farm had a great start to the show, with Quentin Judge rounding out the top three on HH Whisky Royale. The pair competed just a few rounds after Ward, breaking the beam at 61.95 seconds with all the rails intact.

“We try to help Quentin and be a little bit of a sounding board for him,” said Ward. “Hunter [Harrison] was here today, and it was nice for he and his family. Quentin had a great round. Whisky’s not quite as fast a horse as Carlos, so I had a little bit of an advantage, but I think he has a good shot with [Copin Van De Broy] on Sunday. He a nice warm up round, and I think the horse looks fresh and good. ”

While a second CSI event is happening across the street, Ward was excited to have another option for HH Carlos Z to compete at. “This area has grown so much in the number of international horses here during the season,” he commented. “This area can support three international events per week.”

Ward continued, “The [USEF] is trying to modify a lot of the mileage rule. I’m a big believer in allowing a free market. You’re going to go to what’s the right event for you. I think in this area the constrictions can come off, and people can put on an event that they’re proud of. The riders will be able to choose, and there will be different levels. It’s good to have different levels. You know you’re going to have your 5*, your 3* and even down to the National level. I think it’s good; there’s enough to support it, and I think it’s healthier and more entertaining sport than watching 140 people do the same round.”

Earlier in the day, the very first win of the inaugural Wellington Masters also went to the very first rider to enter the show ring at Deeridge Farms. Lea Allen, riding Komedie De Montsec, was the first of 38 entries to go in the $5,000 1.10m, presented by Attention Span Media, and she set the time to beat at an unstoppable 56.989 seconds.

“This feels great!” Allen said following her victory. “It’s a great place to be, here at [Deeridge]. If you don’t like this, you just don’t like living! It’s a privilege to show here. It’s beautiful. It’s immaculate. We’re so honored that they actually opened their doors to us. It doesn’t get any better. I hope they repeat this. It really reminds me of how all horse shows used to be because they’re so personal.”

Allen, who has been a student of Margie Engle’s for 26 years and who has owned her mount, Komedie De Montsec for 10 years, was quick to thank her longtime partners.

“The truth is, it’s all teamwork,” Allen said. “Without them none of this would come. I’m just the passenger. I’m very grateful to have them.”

Finishing in second behind Allen was Sarah Ryan on Karlotta Scott, while third place went to Francisco Arredondo.