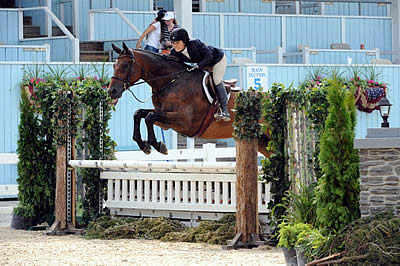 Lexington, Ky. – The United States Equestrian Federation (USEF) is pleased to announce Lawrence “Larry” Langer as the winner of the 2016 USEF Lifetime Achievement Award and Elizabeth “Lizzy” Traband as the 2016 Junior Equestrian of the Year. The recipients will receive their awards at the Pegasus Awards Gala held Friday, January 13 at The Hyatt Regency Lexington in Lexington, Ky. during the 2017 USEF Annual Meeting.

Langer, of Burbank, Calif., has been part of the horse industry for 66 years, from starting lessons as a child to his induction into the Show Jumping Hall of Fame. For his years of service, Langer will be awarded the 2016 USEF Lifetime Achievement Award at the Pegasus Awards Gala.

Growing up on a sport horse breeding and training farm, horses have always been a part of 18-year-old Traband’s life. Despite being born with only one hand, Traband has not let anything limit her passion for horses. She has successfully competed in dressage, hunters, jumpers, and para-dressage. A prime example of courage, sportsmanship, and dedication, Traband will be awarded the Ruth O’Keefe Meredith Memorial Trophy as the 2016 Junior Equestrian of the Year.

Visit usef.org for more information about the 2017 USEF Annual Meeting. 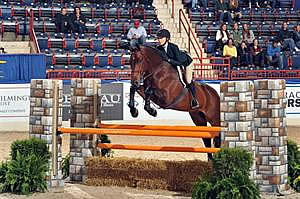 Lexington, Ky. – The United States Equestrian Federation (USEF) is pleased to announce the names of five equestrians who have been selected to receive the year’s most coveted honors. Awarded by the USEF, the Lifetime Achievement Award, Junior Equestrian of the Year, and the Pegasus Medals of Honor will be presented during the Pegasus Awards gala on Friday, January 10, at The Hyatt Regency Lexington in Lexington, Ky. The winner of the Equestrian of the Year Award will be announced at the Pegasus Awards. More information is available here: http://usefnetwork.com/featured/2014USEFAnnualMeeting/.

Keith Bartz of Naples, Fla., has been a leading figure in the American Saddlebred industry for many years. Bartz’s influence spans the entire scope of the sport, as he has served as a competitor, trainer, administrator, and leader. For his undying support and incredible legacy, Bartz has been awarded the 2013 USEF Lifetime Achievement Award and will receive the Jimmy A. Williams Lifetime Achievement Trophy at the Pegasus Awards gala.

Bartz’s influence on the American Saddlebred sport and the entire equestrian industry expands beyond the show ring, as he has dedicated significant time and effort to governance, including serving many years on the Board of Directors, Budget & Finance Committee, and Admin & Finance Working Group and as an Officer of the Federation. He also served many years as chairman of the USEF Licensed Officials Committee. Bartz is a past President of the United Professional Horsemen’s Association and currently serves on the American Saddlebred, Ethics, Compensation & Human Resources, and Nominating Committees for the USEF.

At just 17 years old, Lillie Keenan is already epitomizing the dedication, skill, poise, and sportsmanship that are required to reach the top of equestrian sport. A junior at the Spence School in New York, N.Y., Keenan actively participates in hunter, jumper, and equitation classes. For her talent, integrity, and contributions to the equestrian world, Keenan will be awarded the Ruth O’Keefe Meredith Memorial Trophy as the 2013 Junior Equestrian of the Year.

With her unprecedented success over the last 12 months, Keenan now stands among the most decorated junior riders in history. In the hunter ranks, she was named the Grand Junior Hunter Champion at the Devon Horse Show, in addition to earning Reserve Champion honors at the US Junior Hunter National Championships – East. Keenan also made a huge splash in the jumping ranks, winning many of the most coveted titles offered annually in the United States. In July, she earned Team and Individual Gold medals at the Adequan/FEI North American Junior & Young Rider Championships presented by Gotham North before capturing Team Silver and Individual Gold at the Randolph College/USEF Junior Jumper Championships. She also earned her first Grand Prix victory in June by topping the $125,000 Purina Animal Nutrition Grand Prix presented by Zoetis. Keenan showcased her exemplary riding style throughout the year by claiming the Shalanno Style of Riding Award at the Devon Horse Show and the William C. Steinkraus Style of Riding Award at the Pennsylvania National Horse Show. She closed out her 2013 campaign by topping the fields in the Pessoa/US Hunter Seat Medal Finals presented by Randolph College and the ASPCA Alfred B. Maclay National Finals, adding two of the most prestigious equitation titles to her resume.

In addition to excelling on the field of play, she also shines in the classroom, maintaining an A average while taking a full course load which includes Calculus, Biology, Spanish V, English, and Art History. Keenan, whose most meaningful victory to date came in the 2011 USHJA International Hunter Derby Finals, also gives back to the sport she loves as a member of the USHJA Equitation Task Force and by helping other riders who also train out of Heritage Farm.

The Pegasus Medal of Honor was created as an annual award to recognize individuals who have exhibited outstanding service to horses and equestrian sport. These dedicated individuals have engaged the community in their passion for horses through their work in the industry. This year’s winners, Linda Bibbler, Larry Langer, and Armand Leone, have all dedicated years of service to equestrian sport.

Bibbler of Woodside, Calif., has been an active member of the vaulting community at all levels for nearly 30 years. She began her involvement with horses at the age of 12 and showed hunters throughout high school. After graduating from Harvard University, Bibbler continued to show actively on the West Coast. When her daughter became involved in vaulting, she began her unending commitment to the exciting sport. Bibbler has served as Chef d’Equipe for U.S. teams at international competitions on five occasions including at FEI World Championships in 1996 in Kaposvar, Hungary and the 2008 FEI World Championships in Brno, Czech Republic. She has also served as a competition manager for numerous vaulting events in the U.S. and on the Organizing Committee for the 2010 Alltech FEI World Equestrian Games and its test event held in 2009. Bibbler has an extensive resume in governance roles, having been a member of the Board of Directors for both the American Vaulting Association and USEF, and being a vital member of multiple committees. She was also a co-founder of the Woodside Vaulters and has owned, trained, and lunged several horses throughout her time in the sport.

Langer of Burbank, Calif., has spent a lifetime immersed in the sport of jumping at all levels, after taking up riding at the age of six and never looking back. He is best known as the President and CEO of the Langer Equestrian Group, Inc., which produces more than 35 hunter/jumper and dressage competitions annually. He also founded and managed the Pacific Horse Center in Elk Grove, Calif., in the 1970s, which hosted a lesson program as well as a college accredited Horsemastership Program. Langer also founded the West Coast Grand Prix Association that ultimately merged with the American Grand Prix Association, for which he served on the Board of Directors. As a show manager, overall director, and official he has been actively involved with FEI North American Junior & Young Rider Championships for many years. Langer was also the competition manager for the 1996 Olympic Games in Atlanta and the 1992 FEI World Cup Finals in Del Mar, Calif. In governance roles, he has dedicated his time as a member of the Board of Directors and Committee member for the USEF, Show Jumping Hall of Fame, American Grand Prix Association, National Hunter/Jumper Council, USHJA, and the Pacific Coast Horse Show Association. As a testament to his dedication and knowledge of the sport, Langer has either been the President or Chairman of every major horse show organization in California.

Leone of Glen Rock, N.J., has expressed passionate and unwavering support of the United States’ international teams and their high performance athletes for many years. Leone, alongside his two younger brothers, internationally known as Team Leone, spent the beginning of his equestrian career in the show ring, jumping to many successful placings. In 1980, he was selected as an alternate to the jumping team for the boycotted Moscow Olympic Games. Leone has dedicated much of his time and effort to supporting and guiding the United States Equestrian Team Foundation; from 2003-2008 he served as the President and CEO of the Foundation and was the Chairman of the Board from 2008-2013. In his numerous roles with the USET, Leone helped guide the organization in providing the necessary financial support to ensure that the United States’ High Performance combinations were in the strongest possible position to win medals. He also served as a diligent Vice President of the USEF High Performance Working Group. Leone is still an active member of the USEF Planning, Compensation & Human Resources, Budget & Finance Committees as well as the Vice President, High Performance of the Ad Hoc Selections Committee.

For more information about the 2014 USEF Annual Meeting, visit https://www.usef.org/convention/.