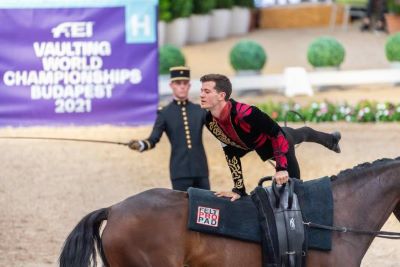 After its triumphant debut at the FEI World Equestrian Games™ in 2018, The Nations Team event once again returned to great acclaim, delivering the first medals of the FEI Vaulting World Championships 2021.  The competition which sees two individuals and one team from each nation line up in the quest for national glory, once again provided a stage for history to be made.

In the female category, golden girl Jasmin Lindner reclaimed the World title she won at the FEI World Championships in Le Mans in 2016. The multi-talented, highly decorated vaulter added to her already impressive collection of Individual and Pas De Deux World gold medals after again showing her formidable talent and unmatched expression within the sport.

The male category lit up the arena in Budapest with France’s Lambert Leclezio retaining the World title he won so emphatically at the 2018 FEI World Equestrian Games™, once again pushing the boundaries of the sport and rising to the top of the highly competitive class.

Leclezio got his quest to retain his World title off to the best possible start, leading after the compulsory round on 8.849 – a score rarely seen within the sport and evidence of his outstanding technical ability. His nearest competitor, Jannik Heiland from Germany, finished round one on 8.584, with the chasing pack narrowly behind.

This exceptional standard was further evident in the first freestyle round where Leclezio, Heiland, and rising star France’s Quentin Jabet all posted scores in excess of 9.0. The skill, flexibility, expression, and harmony of those chasing the medals thrilling to watch.

Saturday’s technical test round saw Leclezio perform a breath-taking masterclass.  The flawless, technical elements coupled with his intricate, clever composition saw him post a previously unheard-of technical test score of 9.083, creating breathing space between him and his nearest competitors Heiland and France’s Theo Gardies. A fall for Quentin Jabet in the technical round saw him fall away from medal contention.

In their first championship together, Leclezio, lunger Loic Devedu and Estado IFCE performed a jaw-dropping final freestyle to retain Lambert’s World title, and further cement his legacy within the sport (8,989). Germany’s Jannik Heiland with Barbara Rosiny on the lunge and horse Dark Beluga also retained the world silver medal from the 2018 FEI World Equestrian Games™.

Further evidence of France’s dominance within the male category, Theo Gardies took bronze converting his previous junior success into senior acclaim (8.659), with Quentin Jabet posting the highest final freestyle score of 9.126 to finish fourth and again prove that he is one to watch for the future.

In the squad competition Germany led through all three rounds of the competition, dominating the event.  Together with lunger Gesa Buhrig and Claus 51, the team from Fredenbeck upheld Germany’s rich history within the Squad competition to take gold. Their perfect final freestyle saw them awarded 9.224 to finish on an astonishing total of 8.735, scoring 0.7 more than second place Team Austria.  A masterclass in teamwork, coupled with incredible artistry and strength, saw the gold medal never in doubt. A commanding win for the powerhouse vaulting nation.

Representing Austria, URC Wildegg with Cornelia Trimmel and Leokado added to their already impressive tally of World and European medals taking second place (8.044). The United States of America finished in bronze medal position, the first time they have won a medal at the senior World Championships in squad since the 2010 FEI World Equestrian Games™, marking their ascent back to prominence on the world stage (7.914).  Denmark rounded off a history making Championship to finish fourth (7.856).

The ever-entertaining Pas De Deux class lived up to its highly entertaining billing, once again providing edge of the seat action.  Vaulting legends from the 2014 gold medal winning team, Team Neuss, Johannes Kay and Janika Derks (GER), converted the silver medal they won at the 2018 FEI World Equestrian Games™ into gold in untouchable fashion. A fall by their fellow countrymen and nearest competitors 2019 FEI European Gold medallists Chiara Congia and Justin Van Gerven in the first round saw them enter round 2 with an impressive 0.7 advantage.  Together with Humphrey Bogart and lunger Nina Vorberg, they proved unbeatable, finishing on an impressive total of 8.936 and taking the top step on the podium.

Chiara Congia and Justin Van Gerven came back from their round one mistake in spectacular fashion to post the highest second round freestyle of 9.092, thus securing the silver medal (8.646).  The bronze medal went to USA’s Daniel Janes and Haley Smith, securing their first ever FEI medal as a pairing after bravely changing their freestyle between round 1 and round 2 (8.469).