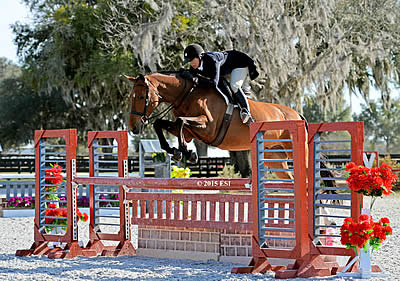 Ocala, Florida (January 31, 2015): Saturday was a great day for Amanda Steege and Zidane, owned by Susan Darragh, who took home a $1,500 prize for first place in the $5,000 Devoucoux Hunter Prix, and chalked up two in a row after their win last week. They scored an 85.5 in the first round and an 87 in the second, propelling them to the top of the leaderboard. Steege’s student, Kimberly Maloomian, of Needham, Massachusetts, also won Saturday in the $1500 Platinum Performance Hunter Prix.

Saturday’s courses, designed by Doug Russell of Ocala, Florida, included jumps up and down a hill, bending lines, and an option on the approach to the first jump in round two.

Steege, of Bedminster, New Jersey, said she wants to be among the top 20 riders in the year-end standings so she can ride two horses in the $500,000 Diamond Mills Hunter Prix Final at HITS Saugerties in New York in September. So far, she has won two out of three HITS Ocala $5,000 Devoucoux Hunter Prix this season after placing second in week one.

“I’m really excited about the changes HITS made for the specs for 2015 that are allowing for the top 20 for to ride two horses in the Diamond Mills $500,000 Final for a few reasons: First of all, I think making that change is going to encourage riders to show in that class more, but also will encourage hunter riders to ride their best horses,” Steege said. “The possibility of riding two will really motivate people to be more successful on a weekly basis, and I think it will make it a more exciting competitive class.”

A close second in the Hunter Prix on Saturday went to Patty Stovel of Georgetown, Kentucky, riding Winner HS, owned by Peggy Jones of Culpeper, Virginia, and trained by Sandra Ruiz. Stovel and Winner HS scored an 86 in the first round and an 85 in the second to earn $1,000. She said after the class, “We are getting closer. Last week he was ninth. He was a jumper and just started doing the hunters.”

Samantha Schaefer of Westminster, Maryland, placed both third and fourth. Schaefer was third riding her own Stallone, with scores of 87 and 82 — moving up from last week’s fifth place finish, and fourth with her horse Classified, with scores of 84 and 83.

Maloomian, who trains with Steege, said, “Urlala was originally purchased for my Mom to do the 2-foot division. She may not be the fanciest horse that I have, but she’s the nicest one. You always know when you are standing at the in-gate that you are going to jump all the jumps — she’s not going to spook at anything and it’s such a nice feeling.”

Steege said of her student’s win, “It was a thrill for team Ashmeadow (Steege’s farm) to have dominated the Hunter Prix in week three of HITS Ocala.”

Casey Zuraitis of Sutton, Massachusetts, riding her own KT Four Seasons, scored a first round of 85 and a second round score of 80 to finish just one point behind and take home second place and a check for $300. Third place with an 83 and a 78 went to Alexa Riccio of Ogunquit, Maine, riding Captain Millet, owned by Kevin Davis of Lincoln, Nebraska. 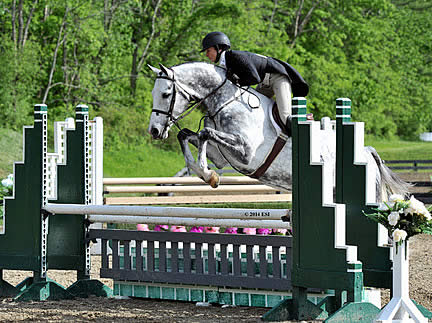 ©ESI Photography. Cornetto Royal may be new to the Hunter ring, but he carried Heather Caristo-Williams to a win in the $5,000 Devoucoux Hunter Prix.

SAUGERTIES, NY (May 26, 2014) – Heather Caristo-Williams has her sight firmly on redemption in this year’s $500,000 Diamond Mills Hunter Prix Final after an unlucky rail in the first round of the 2013 Final. A Saugerties local, Caristo-Williams and Cornetto Royal are back in top contention after winning the $5,000 Devoucoux Hunter Prix qualifier this weekend.

“Cornetto Royal’s first experience in the hunter ring was during last year’s hunter prix qualifiers,” said Caristo-Williams of the eight-year-old Westphalian gelding she owns with her parents Ralph and Holly Caristo.

After an early career in the jumper ring, Cornetto Royal was Performance Hunter 3’3” Circuit Champion this winter in Florida and is living up to his Cornetto Obelinsky breeding. “He was a brilliant jumper, but so beautiful over the fences – we had to try him in the hunter ring,” she said. The young horse’s bloodlines run deep as his half-brother Cornet d’Amour carried Daniel Deusser to a 2014 World Cup Final win for Germany.

The Devoucoux Hunter Prix was hosted on the Outside Course at HITS-on-the-Hudson. Caristo-Williams led both rounds with an 89 in the first and 90 in the second. “I look forward to getting back in this ring and competing each season and elated it all came together here.”

2013 Diamond Mills Hunter Prix Final Champion Jimmy Torano of SW Ranches, Florida showcased Double H Farm’s HH Himself on the Outside Course and jumped to second with scores of 87 and 85. David Wilbur of Simsbury, Connecticut rounded out the top three on Sara O’Connell’s Silvio Song after posting an 86 and 84.

Natalie D’Elia of Middletown, Connecticut was fourth with her own Fanfare after scores of 81 and 82, while Tricia O’Connor of Williston, Florida and Cloverleaf Farm, Inc.’s Inferno capped rounded out the top five on with an 84 and 78.5.

This weekend’s $5,000 Devoucoux Hunter Prix kicked off northern qualifying at HITS Saugerties and Culpeper for the Diamond Mills $500,000 Hunter Prix Final. Qualifiers will be offered weekly during the two circuits.

With her win, Caristo-Williams has bright hopes for the HITS Championship this year. “Over the past year [Cornetto Royal] learned how to be a perfect hunter, and became consistent in the ring,” she noted.  “He’s the perfect hunter ride – soft, correct, and lovely in the air. He’s a special one.”

About Devoucoux
Devoucoux, makers of fine French saddles, is proud to be the title sponsor of each and every qualifying Hunter Prix leading up to the phenomenal Diamond Mills $500,000 Hunter Prix Final. Devoucoux offers a wide range of saddles in many colors and sizes and matching accessories. Devoucoux craftsmen are devoted to creating beautiful products that reflect their obsession with quality and lovingly finished work. For more information on Devoucoux, visit devoucoux.com.

$1,500 Platinum Performance Hunter Prix
Kimberly Maloomian of Needham Massachusetts competed in four qualifiers for the Platinum Performance $250,000 Hunter Prix Final during the HITS Ocala Winter Circuit and pocketed her fifth with a bang this weekend. She and Terry S. Maloomian’s Urlala dominated both rounds with scores of 86 and 84 to win by more than ten points.

“We came to Saugerties to get more experience on the Outside Course – it’s not something we get to see anywhere else,” said Maloomian. “Urlala jumped off the bank perfectly both times and that was a big accomplishment for us – winning was icing on the cake.”

Maloomian has been in the irons of Urlala for three years and will return to HITS-on-the-Hudson this September to compete in the Platinum Performance Hunter Prix Final during the HITS Championship. “It’s great to have something this prestigious for children’s and adult riders to shoot for at the 3’ level,” she said. “The qualifiers are always very competitive because we are all here for one purpose – to make it to the Championship.”

Lena Reeb of Danbury, Connecticut rode Jamie Ringel’s Private Ryan to second with consistent scores of 76 and 77. Meghan Keegan posted scores of 80 and 72 with Meghan Ringel’s Umberto III for third, while Jessica Connor and Dawn Beckman’s Santana rode to 75 and 75.5 for fourth. Hannah Mueller and Montreal, owned by Cazenovia College, received scores of 69 and 81 to cap the top five.

OCALA, FL (January, 20, 2013) – Between riding to first and third in today’s $5,000 Devoucoux Hunter Prix and coaching fellow rider Ellen Toon to second, Amanda Steege of Bedminster, New Jersey got the HITS Ocala Winter Circuit started on a high note. After finishing third in last year’s Diamond Mills $500,000 Hunter Prix Final, Steege has lost no momentum and has her sights set on returning to Saugerties, New York this year to again ride in the final.

She piloted Tony Arena’s Majestic to the win today after a first round score of 83 was combined with the high score of the second round, an 85, for a two-round total of 168.

“Not only is he [Majestic] an amazing jumper, he is just a good guy and he always tries his hardest,” said Steege of the 12-year-old Swedish Warmblood gelding that carried her to today’s win. “We started together about four years ago and he does everything from International Hunter Derbies to the 2’ Pre-Adult Hunters – it isn’t often that you find a horse that can do it all.”

END_OF_DOCUMENT_TOKEN_TO_BE_REPLACED

OCALA, FL (March 7, 2012) – Emma Sullivan of Lafayette, Louisiana rode to victory under the lights on Saturday in the $15,000 Marshall & Sterling Child/Adult Jumper classic at HITS Ocala. She and Thinkslikeahorse’s Elder were the winning pair out of 65 who showed over International Course Designer Jack Robson’s first and second round tracks.

“I was so excited when I won – it was unbelievable! I really love this horse and he has been so much fun to ride,” said Sullivan. “It was a really difficult course and I saw some really fast rounds, so I knew the last turn to fence four had to be tight enough to win. You always risk a rail, but luckily we did it. I’d really like to thank my trainer, Aaron Vale, for everything and letting me ride this great horse, and my parents for being there.”

Robson, of Coronado, California presented 12 obstacles in the first round and repeated six in the jump-off with plenty of challenges in between.

END_OF_DOCUMENT_TOKEN_TO_BE_REPLACED

“This is one of the best classes offered each week in my opinion,” said Leffler, one of the most consistent and talented High-Performance riders to show in both hunters and jumpers. “It’s just a fun event for everyone – the riders, owners and the people that come and watch – everyone seems to enjoy it.”