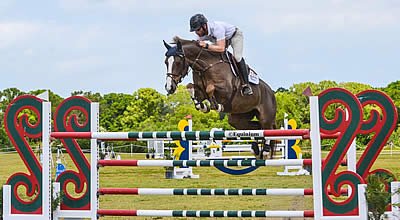 Wellington, FL (March 6, 2018) – As the sun set on the final day of show jumping at Polo West, The Ridge wrapped up its final week of Friday Night Lights and Turf Tour shows before heading back to their spring, summer, and fall base in Asbury, New Jersey. The Turf Tour went out with a bang and a parade of top show jumpers vying for the finale’s top prize, the $15,000 1.40m Turf Tour Grand Prix. A field of 24 were greeted by clear blue skies and springy green turf on the 1.40m course; the inviting conditions and welcoming design proved to favor Ilan Bluman and Kaprice as they swept across the grass to clinch victory. Later that evening, Friday Night Lights’ competition proved to be another milestone for its riders, as the high score High and Low Classic winners were presented with spectacular prizes from Prestige Italia, La Mundial Boots, and River Run Farm.

The Ridge Turf Tour seems to be a family affair for many of its riders, including the Bluman family. Daniel Bluman made quite an impression this year on the Turf Tour, winning multiple Grand Prix and 1.30m classes. Ilan stepped into the arena on the final Friday to prove he wasn’t going to let his brother steal all the limelight. Firebridge, an 8-year-old mare by Diablo, made the most of the exceptional footing, utilizing the traction and suppleness of the turf course to speed her gallops and tighten her turns. “The course today was perfect for a horse like mine,” said Bluman. “It had an excellent triple, steady lines coming from tight turns, and the jump off was ideally suited for a compact horse. Firebridge’s strength is her agility, and we were able to make the most of it today. We really enjoy this atmosphere; we are here every Friday for the Grand Prix, and also show quite frequently in the Rising Star on Wednesdays during season. We have always believed in the value of this show. It’s a great place to get to know a horse.” Bluman and Firebridge cruised to victory on a jump-off time of 39.998. Second went to Kim Farlinger aboard Alan Chester’s Concelo (40.255), and third went to Maarten Huygen’s Goldbreaker and Keven Mealiff (42.920).

As an Olympic and Southeast Asian Games veteran, Marie Antoinette (Toni) Leviste and her 9-year-old mare Loribrie have quite a few competitions under their belt. During Friday’s Finale Grand Prix, the pair made their debut performance at the 1.40m level, and in 2017 made their US show debut in The Ridge’s 1.30m Rising Star Classic. “I always make a point to have our debut shows be at The Ridge,” said Leviste, who hails originally from Manila. “The relaxed atmosphere and world class feel, along with the friendly staff, make it an ideal place to take your horse to the next level without undue stress. We’ve been all over the world, from the US to Poland to Slovakia to Malaysia for the Southeast Asian Games, and she has grown so much and we are really beginning to believe in each other. Loribrie’s strongest attribute is her fighting spirit; even when I’m ready to give in, she’s the one who wants to keep going.”

Leviste, who rides for the Philippines, also has ties to The Ridge going back to the 2000 Sydney Olympics: “I was with Nona [Garson] in Sydney and remember her amazing horse Rhythmical. That makes it all the more special to come here and show at The Ridge, and I want to say thank you to her and her team for being so welcoming and supportive from the very beginning.”

The final Friday Night Lights proved to be a bustling evening for its .90m and 1.10m Child/Adult and Open riders, with a chilly Florida dusk descending into nightfall under the stadium lights at the Polo West arena. As a double points event, all of its competitors were in the running for a number of top prizes from the event’s sponsors, as well as the chance to take home ribbons in multiple classes including a speed round, jump-off, and Low and High Classics.

Hayley Chambers, a highly decorated Friday Night Lights competitor, once again took the blue ribbon in the .90m Low Child Adult Classic; the win cemented her supremacy in the division, and as the High Point Low Classic winner, Chambers was presented with a certificate for a custom fit pair of tall boots from LA Mundial.

As the jumps were raised and darkness fell in its entirety, the 1.10m High Child/Adult Classic, speed round, and jump-off were underway with an eager audience of diners at the Polo Bar & Grill. The Finale week’s High Classic was taken by Whitney Lind of Bethseda, Maryland aboard Whish LLC’s Wanant. The pair, who are familiar with jumping under the lights from previous indoor shows, put in a brisk double clear effort to win the class. “He’s an adult jumper superstar,” said Lind, who rides out of ESP Farm and purchased Wanant from England as a 12-year-old. “I knew after the first jump that he was ready to rock and roll. He knows what he’s doing and I’m just along for the ride. It was a great experience in a unique atmosphere, and a great way to end my season in Florida. I love Nona and George and showing at their events!”

But it was the High Classic’s reserve champion rider and overall high point winner, Kelly McInerney, who stole the show under the lights. She and Dinletto RK placed so well during the Friday evening series at Polo West their combined points could not be beat. US Olympian and co-founder of The Ridge Nona Garson presented McInerney and her trainer Sarah Scheiring with a brand new saddle from Prestige Italia in recognition of her spectacular efforts in the High Child Adult Classics. McInerney, who is from Chester, New Jersey and rides out of Chester Riding Club, stated: “This is for sure the biggest thing I’ve ever won; I felt like my horse was with me every time I saw a distance, and showing under the lights was a great experience for both of us.” Both of the Friday Night Lights’ Finale High and Low Classic winners were also presented with saddlepads from Success Equestrian.

“Our goal with Friday Night Lights was to really make something special and unique for Child/Adult riders,” said Garson. “Riders at this level are the backbone of our sport and we need to support them. Prizes like this and opportunities to show, ride, and experience a new level of horsemanship help to provide a foundation of education and allow them to flourish.” 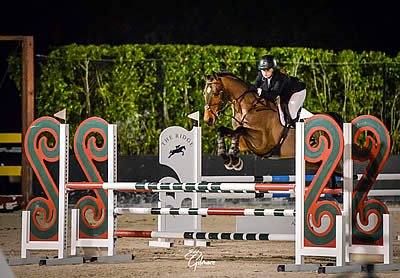