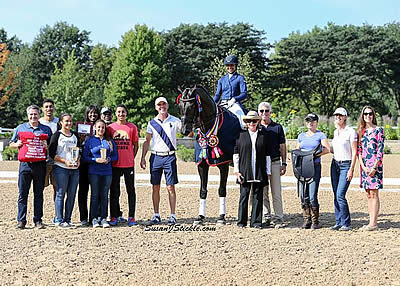 Buffini (Escondido, Calif.) clinched the top two places in the USEF Young Adult ‘Brentina Cup’ Dressage National Championship presented by Dressage Today out of the small but mighty seven-horse field. In Sunday’s FEI Intermediate II Test, Buffini finished one-two with her own Sundayboy and Wilton II, respectively. She and Sundayboy, a 1999 Dutch Warmblood gelding, had a beautiful test that showed great harmony as well as quality piaffe and passage movements. They earned a score of 70.974% for the test, putting them at the top of the championship leaderboard with an overall score of 71.115%.

“He was really with me today. Like I said before, we are just best friends. Friday I was definitely a little bit nervous; I have never been kind of expected to do well before. I was the underdog at my last Festival [in 2014] but this time we were expected to do well, so I put a lot of pressure on myself,” Buffini explained. “Today, I just really wanted to come out, enjoy it, and really have a lot of harmony with the horses. Regardless of the ribbons, I think if you have a connection with your horse and have harmony out there that is more important than anything, so I was really, really happy with him today.”

Buffini was especially thankful of the support the program, which has the purpose of assisting and encouraging U.S. Young Riders in making the transition to the senior Grand Prix ranks, has received from the late Parry Thomas, saying, “A huge thank you to Mr. Thomas who helped create this amazing program, because it would not be possible without him. Otherwise we would be out there struggling against Steffen [Peters] and Laura [Graves].”

Buffini earned the Reserve Champion title with Wilton II by delivering another solid test. She and the 2003 Dutch Warmblood gelding had nice trot work and good canter pirouettes but had minor bobbles in the tempi changes. They finished Sunday’s test with a score of 70.474% and an overall championship score of 68.981%.

“With Wilton, I’m just so proud of him. He can be such a bugger sometimes, but it was the hardest he has ever tried for me; he was just with me. Even though there were mistakes, he never stopped trying, never gave up. He was really, really content in there and stayed with me the whole time,” Buffini said.

Kerrigan Gluch (Wellington, Fla.) had better relaxation with Hampton Green Farm’s HGF Brio to have a respectable test that received a score of 65.553%. The improved cadence in the trot work of the 2005 Andalusian stallion helped them finish third in the championship with an overall score of 64.893%.

Julia Lee Barton (Lawrence, Kan.) delivered another smooth, relaxed test in the FEI Pony Individual Test with her own Bonnaroo to capture the USEF Pony Rider Dressage National Championship title. Barton has worked up the levels with the 2009 Weser-Ems mare and their partnership showed when it mattered most. For their lovely test, they received a score of 67.439% to finish on an overall championship score of 66.220%.

“‘Bonnie’ was really fantastic today. She was really, really rideable which she usually isn’t. A lot of times she gets tense and hot, and it makes it hard to make corrections without her overreacting, but today and yesterday were the same; she was so rideable and so relaxed. I’m just so, so pleased with her,” said Barton.

Commenting on the experience of the USEF Dressage National Championships at the Lamplight Equestrian Center, Barton said, “It’s been really fun to watch all the up-and-coming horses, the same with the young riders, and just kind of get an idea of dressage’s future for both. I think it is a really interesting and exciting combination that they have here.”

Hannah Irons (Queenstown, Md.) claimed the Reserve National Champion title with Festival of Champions veteran Bohdjan on an overall championship score of 66.179%. She and Dressage4Kids, Inc.’s 1999 Dutch Pony gelding had a nice test aside from a bobble during an extended trot movement. Their solid performance earned them a score of 64.837%.

“‘Bobo’ was really awesome today. He went out there and really tried hard, sometimes a little too hard. He got pretty excited about being here again. In the middle of the [trot] extension, he tried to run away, but I’m super proud of him for coming back to me and getting through the test,” Irons explained. “He’s just a really amazing pony and I’m really thankful to be here and to Bebe Davis for donating him [to Dressage4Kids, Inc.], Lendon Gray for choosing me to be his next rider, and all the friends and family for their support.”

Irons also finished third in the championship with her own My Lucky Charm with an overall championship score of 65.296%, making her first Festival of Champions experience a memorable one. She has owned the 2009 Welsh Pony Cross gelding since he was a surprise foal from her first pony and trained him herself. Their partnership was evident as they performed a smooth test to earn a score of 66.220%.

Find more information about the championships at USEF.org. 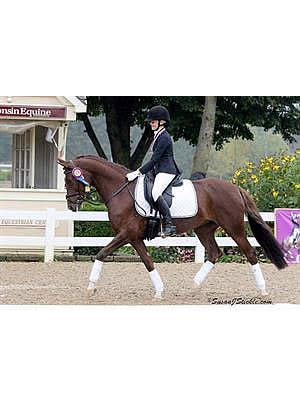 Wayne, Ill. – The top young talent from across the country participated in the 2015 USEF Dressage Seat Medal Finals on Sunday at the Lamplight Equestrian Center. Riders from the ages of 11 to 18 displayed their equitation in front of the judges by performing both group and pattern work. Julia Lee Barton claimed top honors in the 13 & Under division, while Alexander Dawson earned the National title in the 14-18 division.

Kicking off competition this morning in the Wisconsin Equine Clinic Arena were 13 of the nation’s top 13 & Under dressage competitors. Exhibiting poise and beautiful riding to earn the Gold medal with a score of 88.000% was Barton (Lawrence, Kan.) riding her own Bonnaroo. Barton is trained by Clare Krska, who won at these finals in 2010 in the 14-18 division.

“I really liked my individual pattern. Bonnaroo was really responsive and I could focus on myself and my aids,” said Barton.

Barton has owned Bonnaroo, a six-year-old German Riding Pony/Quarter Horse Cross, since the mare was just 30 days under-saddle and has done the majority of the training herself.

Finishing a close second on a score of 87.000% was Tillie Jones (Lincoln, Neb.) riding Samantha Kenik’s Westphalian, Flavio. Flavio was loaned to Jones for this competition, giving the pair just two months together to prepare. Jones is trained by Jami Kment.

Jones explained her preparation for these finals: “I printed out all the patterns available and went through one or two each time I rode, in addition to no-stirrup work.”

Dawson (Kenosha, Wis.) is no stranger to the USEF Dressage Seat Medal Finals, having won the 13 & Under division in 2013. This year he delivered in the 14-18 division, under the guidance of trainer Patricia Becker, and demonstrated great equitation on Lynda Chesser’s KWPN, Shamrock H, to win the championship with a score of 85.000%.

“I’m so grateful to Lynda Chesser for letting me ride Shamrock H. He is such a wonderful horse and really calm; competing in the 13 & Under division really prepared me for this division,” said Dawson.

Taking Reserve Champion was Asia Ondaatje Rupert (Greenwich, Conn.) and her own Dutch Warmblood, Twelfth Night, with an 84.000%. She showed good contact throughout her ride. Rupert is trained by Karin Persson.

“It was really interesting to ride her in the equitation. I rode her in the regionals equitation, but I never did that before, so I learned a lot about my horse today,” said Ondaatje Rupert.

Although Stella Leitner (Los Angeles, Calif.) only has known Amanda Johnson’s Hanoverian, Pip, a short time, having borrowed him for the competition, the pair performed well together. They worked on trot-halt transitions, which helped her in today’s Finals for a third-place finish with an 80.000%. She is trained by Kristina Harrison.

“Pip has been everywhere and done everything so he’s the pro. I was new at this, and he just knows what he’s doing. He’s just a real sweet horse,” Leitner said.