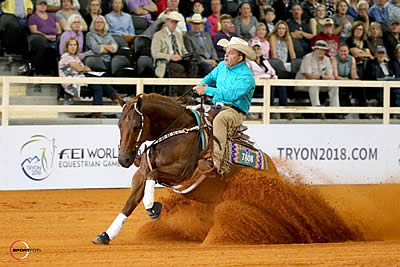 TRYON, NC, USA – May 13, 2018 – The all-American podium stood tall after the completion of two days of FEI CRI 3* competition hosted at Tryon International Equestrian Center (TIEC), in Tryon, North Carolina, alongside the first installment of the Carolina Classic at TIEC. The week served as the eighth and final Test Event ahead of the FEI World Equestrian Games™ Tryon 2018 coming to the venue this fall, from September 11-23.

FEI combinations took to the newly constructed Indoor Arena, located at the main entrance of TIEC, to test their skills against some of the discipline’s biggest names from Thursday, May 10-13. The first day of competition saw 22 competitors contest the USEF Selection Trial First Go on Thursday, May 10, before welcoming back 20 of the original entries. Ultimately, Jordan Larson (USA) and Dan Huss (USA) both walked away with the blue ribbon, tying on a composite score of 450.

Huss entered the second round sitting in first place after scoring 224 points aboard Frederick Christen’s Ms Dreamy, a 2010 Quarter Horse mare (Magnum Chic Dream x A Gal With A Gun). Larson improved upon his first-round score of 222.0 to share top honors riding ARC Gunnabeabigstar, a 2011 Quarter Horse stallion (Gunnatrashya x Wimpys Little Chic) owned by HDC Quarter Horses, to an impressive second-round score of 228. The young Cade McCutcheon (USA) followed just behind on a total score of 446 points aboard Custom Made Gun, a 2011 Quarter Horse stallion (Colonels Smoking Gun x Custom Made Dunit) owned by McQuay Stables, after receiving a 222.5 in the first round and a 223.5 in the final competition.

All three riders are hoping to return to represent the United States at the FEI World Equestrian Games™ (WEG) in September and Huss commented that he’s been waiting for the right horse to come along in order to pursue contention.

“Basically for me, I was just waiting for the right horse,” he explained. “I usually share [Ms Dreamy] with a Non-Pro, but obviously the mare is too old to do the derbies, so Fredrick [Christen] said I could show her at the FEI level. It would mean a lot to me to represent the U.S. I came with the intention of winning here. I’m not a guy that has a big ego, but I wanted to win here and I want to win at the WEG. I have some room to improve yet and I’d have to beat my fellow teammates because they’re tough.”

Huss, of Scottsdale, AZ, complimented the TIEC show organizers for hosting the venue’s first reining event. “I think Tryon did a great job hosting their first reining competition. From what I understand they’re putting stalls in here in the Indoor Arena, so it’ll all be under one roof and I think it’ll be pretty nice.”

Larson, a seasoned WEG competitor based in Valley View, TX, echoed Huss’ sentiments about what a USA-hosted Games means, stating, “It’s awesome to have the WEG return to the US. It’s really cool to be able to represent our country here at home. It was awesome to go to France, but there’s even more pressure I think to represent well here, so we’ve got our work cut out to get ready for the next one and be even better.”

Commenting on his significant improvement in score between the first and second round, Larson had nothing but praise for his mount. “This horse is a good one,” he emphasized. “He’s been really good to me. It seems like he keeps getting better and better and when it counts he’s at his best. In the first round I tried to play it safe and he was kind of messing around with me a little bit, but when I call on him for everything he is great.”

The pressure of the USA team selections definitely weighed heavily on all competitor’s minds, Larson explained, saying, “There’s always a lot of pressure. We have really high expectations of ourselves and because we’re hoping to be on the team to represent the USA, the pressure goes up,” he admitted. “But, that’s what we thrive on, so we have fun doing it.”

Cade McCutcheon, whose 18th birthday is in a few short weeks, is also looking for the chance to represent his country, with his sights set on being the youngest reining competitor to ever compete in the history of the WEG.

The Aubrey, TX native ran the stallion Custom Made Gun, whom his family raised and his grandparents own, to third place after putting in a near perfect round. “It means a lot to come here with the likes of Jordan [Larson], Casey [Deary], my dad [Tom McCutcheon], Shawn [Flarida] – I’ve never had to do that. I’ve always been in the Non-Pro, which isn’t easy, but it’s easier than this. It meant a lot and it was a big honor to just show here, and a bigger honor to be where I’m at.”

Riding beside his father, WEG Gold Medalist Tom McCutcheon this week, the young talent commented, “It’s a cool deal being a third generation reining competitor. Not a lot of people can say that. I just hope I do as well as they did if I make it on the USA Team. It means a lot to me to be able to do this sport with my family. It makes it way more fun, and they have the experience that will help me get through the team and the individual phases.”

Further discussing his family legacy, McCutcheon also noted the incredible accomplishments of his multi-generational equestrian family. Despite being the youngest rider in the FEI CRI 3* this week, McCutcheon commented on the benefit of the experience as he looks towards a bright future.

“Maybe there’s a little more pressure coming from a reining family, but I don’t think very much. My parents don’t put any pressure on me, and it wouldn’t make a difference to them if I marked a 208 or a 220, as long as I’m having fun.” 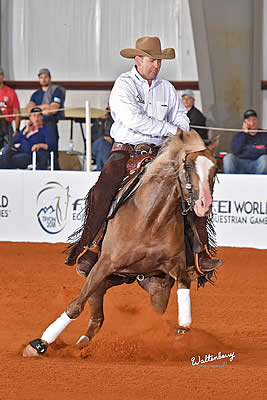 Mill Spring, N.C. – In an important step towards being named to the U.S. Reining Squad for the FEI World Equestrian Games™ (WEG) Tryon 2018, U.S. reining athletes contested the WEG Reining Test Event and USEF Selection Trial this week at the Tryon International Equestrian Center on Thursday, May 10 and Saturday, May 12.

With scores compiled from both evening’s rounds, it was Jordan Larson and Dan Huss leading the way for a gold-medal tie and ending on a combined score of 450.0. Larson (Valley View, Texas) and Arc Gunnabeabigstar, a seven-year-old Quarter Horse stallion owned by HDC Quarter Horses USA, LLC, sat fourth after Thursday’s round with a score of 222.0. Huss (Scottsdale, Ariz.) and Ms Dreamy, an eight-year-old Quarter Horse mare owned by Christen R. Frederick, won Thursday’s round on a score of 224.0.

Larson was part of the gold-medal U.S. Reining Team for WEG in Normandy, France in 2014 and is excited about the possibility of representing the U.S. again. “It was cool to go to France, but I think it is even more pressure to represent well here. We have our work cut out to get ready. That horse is a good one. [Arc Gunnabeabigstar] has been really good to me and it seems like he just keeps getting better. When it counts, he’s his best. When I ask him for everything, he’s his best.”

“For me, I was just waiting for a nice horse,” laughed Huss. “She is a Magnum daughter out of a Gunner mare. It would mean a lot to me [to represent the U.S. at WEG]. I’m not a guy with a big ego, but I came here to win this and I want to win the WEG. I have some room to improve. I have to beat my fellow teammates, because they are tough.”

A third-generation reiner and on the cusp of his 18th birthday, Cade McCutcheon claimed the bronze medal at the USEF Selection Trial. McCutcheon (Aubrey, Texas) and Custom Made Gun, a seven-year-old Quarter Horse stallion owned by Tim and Colleen McQuay, were tied for second after Thursday’s round. The combination held their own in the second round to end on a score of 446.0. Should McCutcheon’s place on the U.S. Reining Team for WEG be finalized, he would become the youngest U.S. athlete to represent reining at the Games.

“It means a lot to come here with the likes of Jordan [Larson] or Casey [Deary], my dad, and Shawn [Flarida],” said McCutcheon. “I’ve always been in the non-pro, which isn’t easy, but it’s a lot easier than this. It is a big honor to get to show here and a bigger honor to be where I am at. It means a lot to be able to do this sport with my family; it makes it way more fun. My parents don’t put any pressure on me. It wouldn’t make a difference to them if I marked a 208 or a 220, as long as I am having fun.”

Full results for the WEG Reining Test Event and USEF Selection Trial can be found here.