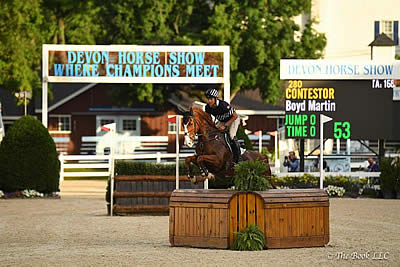 Devon, Pa. – May 26, 2019 – For the third year in a row, the popular $50,000 Devon Arena Eventing competition, sponsored by Douglas and Cynthia Howe and Salt Works, showcased top-level eventing in a unique class that incorporates two of the three elements of three-day eventing: cross-country and show jumping. A packed crowd looked on as a record 33 entries turned out to challenge famed course designer Captain Mark Philips’ tracks, where ultimately Boyd Martin (USA) and Denise Lahey’s Contestor took home the top prize after dominating two rounds of competition, while defending champions Chris Talley and Sandro’s Star finished with reserve honors and Buck Davidson and Carlevo rounded out the top three.

The Children’s Jumpers stole the show earlier in the day on Sunday at the Devon Horse Show and Country Fair with the awarding of the Children’s Jumper championship, sponsored by Westover Companies/Guntram Weissenberger, Jr. A competitive 20 horses and riders strived to produce the fastest round in Sunday’s $2,500 NAL Children’s Jumper class to accumulate final points towards the overall title, but it was Claudette Yarbrough and her own Lyla who walked away with the www.HorseinOil.com Challenge Trophy and the Leonard Tose Memorial Challenge Trophy to claim top honors with a total of 21 points.

The fourth day of the 2019 Devon Horse Show and Country Fair welcomed the tradition of the Carriage Pleasure Drive division to the prestigious Dixon Oval. The popular and time-honored discipline of driving has been part of Devon’s history since 1896, while the Carriage Pleasure Drive has been an established flagship event for over 50 years, entertaining exhibitors and spectators alike on the Sunday before Memorial Day each year. 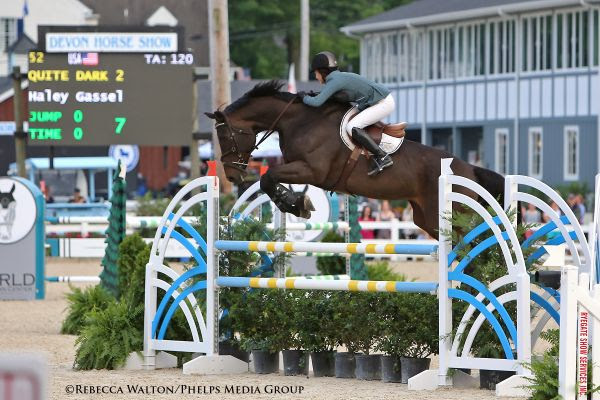 Haley Gassel and Quite Dark 2.

Devon, Pa. – June 3, 2016 – Friday night at the Devon Horse Show and Country Fair was all about speed, and only one athlete had all the answers during the $25,000 Open Jumper Devon Speed Challenge sponsored by the World Equestrian Center. Haley Gassel and Quite Dark 2 were the only duo able to master the speed track and leave all the fences intact to capture the winning prize.

“This is unbelievable,” the young rider said, smiling. “People dream of just coming to Devon, and people dream of just getting a Devon blue. For me, to win a grand prix at Devon, it boggles my mind. That wasn’t even in my wildest dreams!”

Kelvin Bywater designed a very technical course for the 1.40m faults converted speed class. Featuring multiple inside options and areas to make up time, competitors had to carefully navigate the course to have the fastest time, while also leaving the obstacles intact.

Three athletes secured Gassel’s time, but it came at the expense of rails coming down. The first was Laura Chapot with ISHD Dual Star, who would claim fourth place with a time of 67.607 seconds after the added fault conversion. She was only 2/1000ths of a second slower than Great Britain’s Amanda Derbyshire aboard Goldbreaker, who clocked a time of 67.605 seconds for third place. The only other rider with a better time was newly minted Longines FEI World Ranked Number One Rider, McLain Ward. It looked like he had the ride of the night on HH Best Buy, and while they were faster than Gassel across the ring, the faults added to their time would mean they broke the beam at 67.279 seconds for second place.

Gassel had both the speed and the accuracy with Quite Dark 2 that it took to win the Friday night highlight event. The pair left all the fences intact as they dashed across the finish line in 65.500 seconds for the Devon blue ribbon, as well as bragging rights over Ward.

“That is unbelievable,” expressed Gassel about her victory over the world’s best. “That will never happen again, that is a bucket list right there! He was really nice about it, though. He put in a really good round and it just wasn’t in his favor tonight.”

This is only Gassel’s second year competing at the Devon Horse Show and Country Fair, and it’s her first year competing in the Open Jumpers with Quite Dark 2, who she has been riding for three years.

Gassel continued, “Our relationship has developed so much. He trusts me, I trust him. He’s just gotten better, faster, stronger. I do my best to try to keep him the best shape possible so he can jump tonight and jump tomorrow. He’s been a great horse.”

Earlier in the afternoon, the Amateur Owner Jumpers took center stage in the Dixon Oval where it was Jacob Pope that rode away with the top prize aboard Zilvana. Reid Patton set the pace to beat as the first to show over the short course with Twisther, clearing all the fences in a time of 33.592, which would be good enough for second place. Pope and Zilvana were the next pair to be faultless over the jump-off, and by leaving strides out and taking the inside turns they narrowly edged out Patton with a time of 32.291 seconds. Caitlin Hope rounded out the top three aboard Total Touch, producing a double clear effort in 34.106 seconds.

“Zilvana is a really fast horse, she’s small, and she’s careful, so I am not worried about having to steady her,” explained Pope “She’s really fast and I knew that we would be quick and smooth. I went inside everywhere else. She was clear and great.”

Earlier in the day, Pope placed second in the first Amateur Owner Jumper event, which kicked off the day’s competition. The victory in the speed competition belonged to Christina Firestone on Arwen, while Anna Cardelfe and Dollar Van’T Eigenlo DH rounded out the top three.

“Our goal for this year was Devon, so I am really happy with how it’s gone so far,” smiled Pope, a senior at Rollins College. “Zilvana is a really sensitive mare, which I grew up riding. I just let her do her thing!”

The Amateur-Owner Hunter divisions began on Friday at the Devon Horse Show and Country Fair, and it was Kaitlyn Van Konynenburg and Beth Bidgood who outshined the rest to finish the day at the top of the pack.

In the Amateur-Owner 18-35 3’6″ Hunter division, 18-year-old Van Konynenburg and Wish List made their trip from California worthwhile by earning the highest score in the division. After placing eighth in the first class, the duo returned ready for the second round, and the judges awarded the trip a score of 88, which secured Van Konynenburg the blue ribbon.

It was a close race, however, as second place went to Callie Seaman and Skorekeeper and their score of 87, and third went to Laura Sexton and Set To Music with a score of 86.

The first class in the division was won by Samantha Schaefer and Classified with a score of 85. Second place went to Krista Weisman and Reality and their score of 84, while Stephanie Danhakl took home third aboard Golden Rule with 83.5 points.

“The first round was really fun, but I got a little nervous into the two-stride coming home and we jumped a little low,” Van Konynenburg explained. “In the second round, I said ‘OK, let’s just put everything that happened behind us and just go in and have a good time.’ I was just focusing on having fun. I don’t know when I’m going to be back here again, so I just wanted to have a good time with him and have solid round.”

Van Konynenburg will be graduating high school next week and will start college at USC in the fall. She said that she will continue to ride as an amateur, as Wish List will only be 30 minutes away at trainers Carleton and Traci Brooks’ Balmoral Farm.

“He’s just the greatest horse,” Van Konynenburg said. “He comes to the party 100 percent every time and puts all his heart into it. He really is a special horse; I’m very lucky. It was a big team effort to get my horses out here, and I definitely wouldn’t be here without everyone backing me up.”

Van Konynenburg said she purchased the gelding three winters ago in Cleveland after failing to find the perfect horse in Florida.

“It was freezing, and we had one jacket,” Van Konynenburg laughed. “It was so cold, but it was worth it all the way. He’s just the sweetest horse. We love him.”

The Amateur-Owner Over 35 3’6″ Hunter division was the next to show, and Becky Gochman took home the blue ribbon in the first class after earning an 89 with Empire. Beth Bidgood was hot on her heels, however, coming in second by only one point in the irons on Uprising.

In the second class, Bidgood and Uprising returned to deliver a lovely round that earned the duo a score of 88 and the blue ribbon. Second place went to Jean Sheptoff and Heartcore with a score of 87, while John Ingram and Airport 48 took home third with a score of 86.

“I am so excited,” Bidgood said. “This is my first Devon. I love the tradition and everything; I’m having a blast. I was really nervous, then when I went into the first class, I was OK once I started going. I’m just thrilled. My horse is going incredibly.”

Before transitioning to his hunter career, Uprising was a jumper. Bidgood said she purchased the 9-year-old gelding just over a year ago in Florida.

“We were able to turn him into a hunter, and he’s just been fabulous,” Bidgood explained. “He’s the easiest horse I’ve ever had. He’s just so sweet. He’s only been doing the hunters for a year.”

John White has been competing at the Devon Horse Show and Country Fair for the last six years, but has never driven away with the championship title until Friday night. The New Jersey resident drove into the Dixon Oval with a bit more confidence this year, already securing three first-place finishes in the division.

In the Four-in-Hand Timed Obstacle, White locked in the first clean round of the night and set the time to beat with 160.350 seconds in his Road Coach Excelsior. However, Paul Martin had just enough of an edge in his Park Drag to beat out White’s time and hand him his second, red ribbon of the division.

With a total of 21 points accumulated and a two-point advantage over Martin, it was White who earned the Mr. & Mrs. Foster Bright Perpetual Trophy.

“We’ve had a very good show,” White explained. “The horses have been excellent. I’m very happy with that and I’m very happy with all the people that have helped us. We’ve been here a number of times, but this is the first time we won the overall champion.”

The crowd watched in awe as his four grey Kladruber horses pulled the carriage around the Dixon Oval for the honorary victory lap.

The night was filled with first-time winners, as Carson Kressley earned his first tricolor ribbon in the Open Three-Gaited Park Horse Stake.

“I’ve shown in a lot of places, but there’s nothing as special as the crowd support at Devon,” Kressley said. “Showing in front of thousands of people in the Dixon Oval is a thrill like no other. I’ve shown this horse a couple times this season and we’ve been second every time. So, to pull it together and win a big class like this here is a huge thrill. Devon is one of the greatest shows in the country. It’s where you come, watch and dream of competing.”

Kressley had the honor of riding Annika Bruggeworth’s American Saddlebred, Famous Kiss. The two have been friends for nearly 25 years.

For Lynn Finelli, the night was about defending her Western Country Pleasure Horse Championship.

“It’s unbelievable to win here,” Finelli said. “It’s so incredible. To win last year and this year just takes my breath away.”

It was a repeat win for Finelli’s mount, CH Winsdown Edgecliff, as well. The 11-year-old was converted from the English discipline to Western and has been showing successfully, winning the World Championships in Western Country Pleasure in 2012.