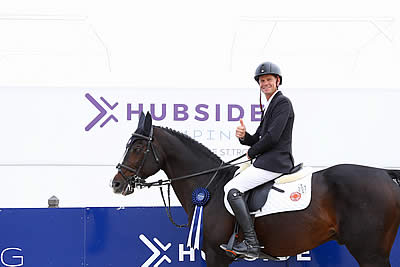 Belgian Jérôme Guery wins in the “big” of the day at HUBSIDE JUMPING at the end of a jump-off for which twelve couples had managed to qualify. In the saddle on Quel Homme de Hus, he was more than a second ahead of Dutchman Jur Vrieling, associated with El Rocco, and Swede Peder Fredricson, at the helm of H&M Crusader Ice. Best French pair of the event, Kevin Staut and Visconti from Telman, finished fifth.

“The objective with Quel Homme de Hus was not necessarily this event, but Sunday’s Grand Prix. On the first lap, he jumped really well, so I hesitated to take part in the jump-off to try to keep it fresh for Sunday. But when I saw the layout of the jump-off, I thought it was a course that suited him quite well. Quel Homme is not the fastest horse. On the other hand, he has immense action and compared to the other horses in the jump-off, I managed to pull out one stride less on all lines. That’s how I saved time. When the jump-off matches it, I know that I can use his great gallop and that’s what I did today. I am for example the only one to have made six strides between obstacle 1 and obstacle 2, the only one in ten strides to go in the double: I really know that I can save time by taking advantage of his great action. In the Grand Prix, if we have the same teacher he play-off, this event may have been a good preparation.”

The public is one of the strongest assets of the Longines International Jumping of La Baule. Gathered in the grandstand of the François André stadium, the spectators have been up to their reputation, encouraging each pair, supporting the French riders, greeting every ride and cheering the winners.

These true connoisseurs would have liked to sing the Marseillaise, but they did not hide their pleasure when listening to the Brabançonne that resonated to honour the victory of the Belgian Jérôme Guéry and Grand Cru de Rozenberg.

Before reaching that point, the riders had to qualify for the jump off, after analysing the course designed by Frédéric Cottier. Some were too cautious with the time (83 seconds allowed) and got trapped, especially over the oxer n°6 placed after the water jump, and over the triple combination. Among the disappointed: the Canadian Eric Lamaze, who had a rail down with Chacco Kid, the Olympic champion Steve Guerdat, penalized with 4 faults associated to Bianca, as well as Simon Delestre. The world n°1 and his gorgeous Qlassic Bois Margot completed the course with 5 penalty points. Patrice Delaveau will do his very best to forget his below average performance with Orient Express*HDC (12 points).

Pénélope Leprevost put pressure on her opponents when jumping the 8 fences of the jump off in a time of 36’’19 without penalties on Flora de Mariposa. But the option on a victory by the French, vice world champion and world n°5, fell apart after Jérôme Guéry’s ride on his beautiful chestnut horse with an odd eye. Grand Cru de Rozenberg flew over the poles in a time of 35’’74 that allowed him to clinch victory in the Longines Grand Prix of the city of La Baule 2016, ahead of Pénélope Leprevost and Flora de Mariposa. The 3rd place goes to the German Michaels-Beerbaum and Fibonacci 17.

Yves Métaireau, Mayor of La Baule:
« We had ordered a nice weather, we had a wonderful Grand Prix and a fantastic public. Around 8000 to 9000 spectators were here this afternoon, thanks to the free admission and to the quality of the show. I would only worry about one thing: where to fit in more people next year. »

Jérôme Guéry (BEL), 1st:
« You have to know this show is particularly dear to me, even if I only came here twice. I started in Super League in La Baule and win here in front of this public gave me a lot of emotion, especially because I bought Grand Cru less than a year ago, and I was jumping 1,20m classes with him. I am really happy; my plan was to come to La Baule with the national coach. I was very good in the Grand Prix today, not so good in the Nations Cup. I want to apologize to my partners; it can happen. »

Pénélope Leprevost (FRA), 2nd:
« Flora is really in very, very good shape. I did not ride well in the Nations Cup, even if it does not show, since we signed a double clear; the mare was fantastic. It is a very strange feeling to ride her; she may be the mare of a lifetime that any rider dreams of meeting once in his high level career. She may be my Jappeloup. I ride each course with great pleasure with this mare, knowing that if I had found the right distance on the last fence, I could have been faster than Jérôme, but I did not. »

Meredith Michaels-Beerbaum (GER), 3rd:
« I did not come here in a long time, since 1991 actually, since often I am in Florida in winter. I was very young the last time. I was very happy to be here and very pleased about the way things went for me this weekend. »

Frédéric Cottier (FRA), course designer:
« I heard a lot about the footing after the Nations Cup, but I was really confident today when I saw how the ground dried out. The course we put up was a real one with oxers between 1,65 m and 1,80 m, and 1,60 m verticals. The line after the water jump was very technical, even if after 10 riders I had already 6 clear rounds. The first horses jumped very high the water and backed up a little. This year, we had an exceptional quality of horses. » 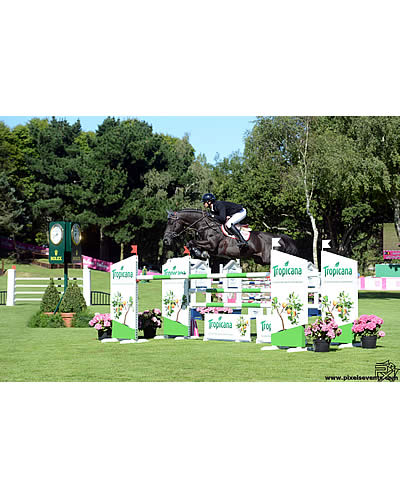 To celebrate the comeback of the international Jumping of Dinard at the highest level of competition, the magnificent site of the Val Porée, beautifully decorated in pink, was holding the first class of the CSI5*, where the best riders in the world will compete during the next four days.

The challenge of the day, for the 40 riders on the start list in this Alvalle class, was clear: present the showground to the horses, and prepare for the Tropicana Derby, on Saturday, and for the Grand Prix of the City of Dinard, culminating point of the competition, on Sunday afternoon.

On the menu for this opening class, a 12 fences course, at a height of 1m45, in two phases, only the second one being against the clock. Out of the twelve riders who signed a clear round, the Belgian rider Jérôme Guéry was the fastest (40″77), associated to his faithful Zojasper. With a large smile on his face, the rider was obviously very happy about his horse. “He seemed very comfortable on this huge track that can sometimes be impressive. I had planned to be quite fast, but not to push him to his limits. He was very confident and I thought I could ask a little more on the second phase. I did not take the latest risk, but I cut my turns short. Of course, not so many riders decided to play the time, the real sport will only start tomorrow, but begin a show with a win is always encouraging.”

The Olympic champion, Eric Lamaze (CAN), who was leading the class most of the time, finally placed second with Fine Lady 5, in a time of 43″30. The 3rd place goes to the Italian rider Luca Maria Moneta and Herold N (44″40). The French riders, who had chosen not push their horses today, still stand in the top Ten, with Alexis Borrin, 5th with Ruby de la Fosse, who confirms his form at this level, and Emeric George, 7th with Rocker d’Ysieux. “It is a very good start for my horse. He needed this class to warm up and get into the competition. He did it with great style; I had a very good feeling. I hope he will keep on jumping that way; I trust him on this.”

Tomorrow, at 11.30am, the riders will be in the main arena for the “Ille et Vilaine” County class, followed by the Suez Environment class at 2.30pm.