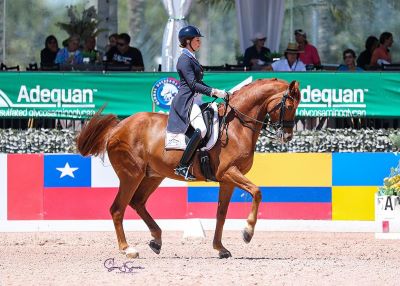 Joppe K’s considerable talents came to fruition in the grand final of the Lövsta Future Challenge Young Horse Grand Prix Series, which he won with 70.052% under the saddle of Jennifer Williams (USA). The horse has an exceptional competition trajectory, having won both the six- and seven-year-old young horse finals at Wellington in 2020 and 2021.

These classes aim to identify and nurture talented, up-and-coming young FEI horses, giving them exposure to benefit their development with the biggest of world stages in mind. Williams and the eight-year-old KWPN gelding by Harmony’s Rousseau had only qualified a week earlier for the final, earning their ticket at the last opportunity.

Australian Olympian Kelly Layne and Fernando, who qualified via a win in AGDF 3, claimed second place with 68.815%. Layne has been riding Ellen Trouillé’s 10-year-old gelding, by Foundation x Sandro Hit, since he was five. Alice Tarjan rounded out her busy season by taking third place on her own eight-year-old mare Jane, by Desperado NOP. Jane and Joppe K were the youngest horses in the class.

A tactical decision not to contest the previous day’s warm-up class at Intermediate II level with Joppe K paid off. The horse had been competing in CDIs at small tour until just last month.

“Because the I-2 was the warm-up and the day before the class, and there’s the halt at X [instead of at G, as in the Grand Prix, on the final center line], I decided that wasn’t wise for him, because we did his first grand prix on Thursday and I learned that he wanted to halt at X,” explained Williams. “We had to talk about that, and today he was not thinking halt.”

Tinne Vilhelmson-Silfvén of class sponsor Lövsta said: “The thought with the Lövsta Future Challenge is to give the young horses this possibility to get into the international arena with the best judges and with the kind of different atmosphere than a smaller show. They are inexperienced, young horses, and it’s okay if there are mistakes here and there, because it should be educational. It’s not already five-star top grand prix; it’s young horse grand prix. And it should be that quality is the most important part.” 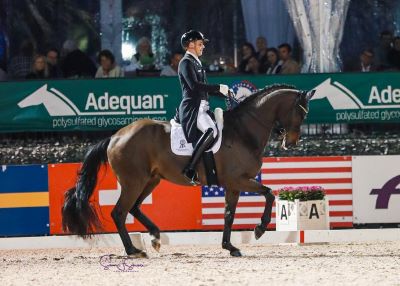 The 34-year-old German rider Frederic Wandres pulled off another powerful, supple, and enchanting performance for 81.065% aboard Elena Knyaginicheva and Sergey Knyaginichev’s 12-year-old Bordeaux gelding Bluetooth OLD, who only started international grand prix in the spring of 2021.

“I felt super tonight,” said Wandres, who also topped the Grand Prix and whose freestyle was made by Michael Erdmann. “My best score was 79% in Aachen in the four-star CDI, but today 81% is really something fantastic and incredible.”

It was nip and tuck in a high-quality tussle for the top spot in the Grand Prix Freestyle CDI4*, presented by CabanaCoast. Both Jennifer Williams (USA) and Susan Pape (GBR) scored over 77%, but it was Williams who emerged triumphant, taking her prize-money earnings to $5,500 in 24 hours.

Riding the 19-year-old gelding Millione, who is six years older than any of his challengers, Williams pulled off a career-high score of 77.175% — with Pape trailing by just 0.17 percentage points aboard Harmony’s Eclectisch. This was the second career personal best set by the Millione Partners’ gelding Millione, by Milan, in two days.