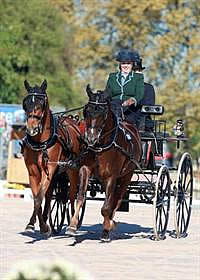 Pau, France – The 2013 FEI Pony World Driving Championships kicked off Thursday with the first of two days of driven dressage. Pair Pony and Pony Team drivers took their first steps toward world titles as they performed their tests in front of the Ground Jury composed of Klaus Christ, Anne-Marie Turbe, Diana Brownlie, and Dot Wilcoxson. U.S. competitors got off to a strong start with all four drivers cruising into the top 12 in their respective championships.

Leading off the U.S. effort on Thursday was Jennifer Matheson (Aiken, S.C.) and her mother-in-law Katrina Becker’s talented pair as the first American competitors into the arena. The reigning USEF National Combined Driving Pair Pony Champion drove to a score of 52.10 to stand sixth in the Pair Pony Championship after the first phase.

Right behind Matheson in seventh place is U.S. teammate Wendy O’Brien (Aiken, S.C.) on a score of 54.14. The 2012 National Champion once again drove her own talented ponies to lay within striking distance of the leaders when everyone heads onto the marathon on Saturday.

Ewoud Boom of the Netherlands leads the Pair Championship after the driven dressage with a score of 36.48. Standing in second place is Germany’s Dieter Baackmann on 37.70 and Marco Fruend of Germany holds third place on a 42.24.

Nine-time National Champion, Lisa Stroud (West Grove, Pa.) drove her trademark team of white ponies to a score of 57.73 as the first U.S. driver into the arena during the afternoon session. Stroud, who is looking to secure her third World Championship Team medal this weekend, will head out onto the marathon in eighth place.

Katie Whaley (Paris, Ky.) was the final U.S. competitor of the day, driving into 11th place in the Pony Team Championship with Mia Allo’s team on a score of 60.5. The 2003 and 2005 World Championship veteran will look to showcase the strong form that has propelled her and Allo’s ponies to top finishes in Europe over the summer.

The Netherlands holds the top two places after the dressage with Bram Chardon leading on 34.11 and Jan De Boer sitting in second on a score of 37.31. Tobias Bucker of Germany stands third with a score of 41.41.

Driven dressage comes to a conclusion on Friday with the Single Pony Championship, where the U.S. will be represented by Tracey Morgan at 10:45am local time and Paul Maye at 2:50pm local time. 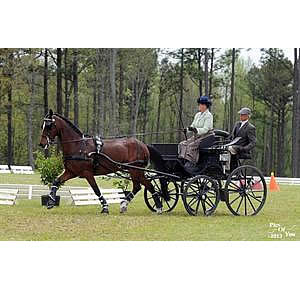 Morgan (Beallsville, MD) drove her own Fuego 88 flawlessly in the cones phase to post the only double clear in any of the Advanced divisions. The 12-year-old German Riding Pony completed on a three-day total of 130.59.

“I knew I needed to do that (drive double clear), to have a shot. That double clear is always so important; it was my first of the year,” said Morgan. “We kept fighting our way up from third after the dressage all weekend.”

“It was fantastic to win the National Championship; it was good friends and good competition.”

Earning the Reserve Championship was the leader following the marathon, Paul Maye (Fairfield, VA) on a final score of 134.71. Maye drove Harmony Sport Horses’ Markus just a little too conservatively to incur 8.32 time faults but leave all the balls in place in the cones.

Matheson (Aiken, SC) drove the combination of Bax and Cees to a cones score of 8.90 after incurring six faults for two balls down and 2.90 time faults. The 2010 and 2011 National Champion earned her third title on a score of 145.15.

“It’s great to win (the National Championship); this makes three,” said Matheson. “It really solidifies to me that I can represent my country.”

The Southern Pines CDE proved to be a large step forward for Matheson and her ponies after a less than ideal spring campaign.

“We’re improving; I’m still trying to get my confidence back. I’ve been unsettled but I’m getting more confident.”

Finishing in second and earning Reserve Champion honors was Wendy O’Brien (Aiken, SC) on a score of 157.37. The 2012 National Champion incurred four balls down and 4.60 time faults for a cones total of 16.60.

Stroud (West Grove, PA) drove with great precision to complete the weekend with a cones score of 4.24, one ball down and 1.24 time faults. She earned her record-tying eighth consecutive National Championship on a score of 170.11.

Stroud was very pleased with her team on Sunday as they performed so well over the challenging cones course.

“That was a hard cones course. I felt lucky to get out of there alive,” said Stroud. “It (the time) was very tight. I’m very pleased with all these ponies.” 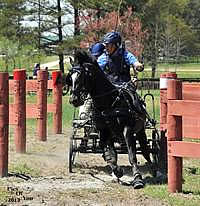 Maye (Fairfield, VA) drove like a man on a mission over the eight hazard course guiding Harmony Sport Horses’ Markus to a marathon score of 77.96. The 2012 National Championships won hazards one, four and seven to hold a four point lead going into the cones phase.

“He was wonderful, he did everything I asked him to do,” said Maye of his 12-year-old German Sport Pony stallion. “He got me out of trouble in a couple places and he finished very strong.”

Lying second heading into the cones are Tracey Morgan (Beallsville, MD) and Fuego 88 with a two-day total of 130.59.

Matheson (Aiken, SC) posted the quickest times in five of the hazards on Saturday. On the marathon the 2010 and 2011 National Champion drove Bax and Cees together for the first time with great success as she posted a score of 86.86 for the phase.

“I thought the marathon went well. It’s a new combination,” said Matheson.  “I’m really happy with how it went.”

Stroud (West Grove, PA) won the dressage phase of the USEF National Combined Driving Pony Team Championship on a score of 50.24 and lengthened her lead with a strong marathon phase. The reigning National Champion won five hazards (one, three, four, five and six) to earn a marathon score of 115.63.

“I like that there were eight hazards here; it’s very technically challenging and very tight for a Team. Overall it was very well built and so welcoming. The volunteers and committee make it a competitor friendly show. When you wake up and are excited there’s nothing better,” said Stroud of the Southern Pines CDE. “I was thrilled with the dressage; I was hoping to break 50 this spring and I did 50.24 (yesterday), so I’ll take the .24.”

Stroud heads into the cones phase with a nearly 22 point lead as she vies to earn her 10th National Title.

Sitting in second place overnight is Heather Schneider (Palm City, FL) with a score of 187.24.

Competition concludes for all divisions with the final cones phase on Sunday.

Jennifer Matheson (Aiken, SC) led off the American effort on Thursday in the Pair Pony Championship and did not disappoint. Matheson and her pair, owned by her mother-in-law Katrina Becker, drove to a solid score of 46.08 to stand in third place heading into Saturday’s marathon.

Matheson is driving under the U.S. flag for the first time in Lipica after having represented her native Canada in the 2005 World Pony Driving Championships.

“I’m thrilled to be driving here, and I have worked hard to get to these championships. I drove for Canada in 2005 and was the alternate in 2007 and the alternate in 2009,” Matheson said. “My dressage was good. There were a few things that could have gone better, but I was really happy.”

Wendy O’Brien is making her World Championship debut this week and had a credible performance in the first phase driving her own pony pair to joint 21st place on a score of 61.82. O’Brien, who also hails from Aiken, SC, was the winner of the Southern Pines CDE in April.