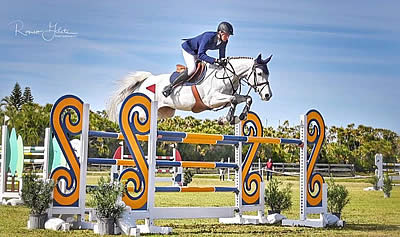 Wellington, FL (January 29, 2019) – Over two days of competition that were as different as the show jumpers are from the hunters, the fourth week of the Turf Tour and second January Hunter Derby Days wrapped up with young Olympian Martin Fuchs as the $15,000 1.40m Grand Prix victor, Jennifer Madden as the top rider in the $15,000 USHJA International Hunter Derby, and Kim Barone as the winner of the $5,000 USHJA National Hunter Derby.

With a chill in the air but a bright sun in the sky Friday welcomed competitors back to the beautiful fields of Santa Rita Polo Farm for the conclusion of week 4’s Turf Tour. Swiss Olympian Martin Fuchs and the 9-year-old grey gelding Faberlys (Cornet Obolensky x Beverlys) dominated the Grand Prix course designed by international Mark McGowan to take the win. Last week’s Grand Prix winner, Olympian Laura Kraut and Confu, were knocked into second by the 26-year-old, who is currently ranked 10th in the Longines FEI Rankings and fresh off a January 16th victory in the Longines FEI Jumping World Cup Basel. Third went to Stella Manship and Liismeen Ludam. Manship, who has been a longtime supporter of The Ridge and its events, was the final ride of the day and thrilled with her mount’s performance. “This horse means the world to me,” said Manship. “I have him for a year and he is the safest, kindest, hardest trying horse. I hadn’t jumped big classes in 20 years, and we did the 3* at Bromont and he was amazing. Our double clear effort here was fantastic, and being able to come out and jump on the grass is always a treat for both the horses and the riders. I’ve been at pretty much all of The Ridge’s events since they started, and Nona and George always do everything they can to put on a wonderful event and make it a positive experience for their competitors.”

In a 180-degree shift from Friday’s brisk sunshine, a passing cold front brought a steady rainfall for most of the day Saturday. The Ridge’s Hunter Derby Day competitors were undeterred, however, as the covered arena at Jim Brandon Equestrian Center provided for perfect footing and a drizzle free setting for the $5,000 USHJA National and $15,000 USHJA International Hunter Derbies.

Jennifer Madden and Margethe Munkdale’s Sirocco set the tone for the day, jumping to second in the Classic and first in the Handy round to win the $15,000 USHJA International Hunter Derby. “Sirocco is a relatively new Derby horse but he has won just about every class we’ve entered,” said Madden. “He’s very personable and tries his hardest every time. Having the covered was a huge blessing as the rain just hasn’t stopped, and while we’ve only been to The Ridge’s events a few times we are sure to come back.” Madden’s victory in the class of 15 was made even more impressive by the stiff competition from her fellow international riders and their mounts, which included first 2019 International Hunter Derby winner at the Ridge, Olympian Peter Wylde and Michelle Kamine’s Dynamo.

Around midday the National Derby horses had their rounds, which saw Kim Barone and Cynthia Bulwicz’s Cyril take the first win of the day. “We purchased Cyril as a 5-year-old and we’ve had him for 7 years,” said Barone. “He’s definitely won upwards of 15 Derbies, and the owner also shows him in the Adults. He’s super smart and has the most amazing personality. We struggled a bit maintaining the flow during the tight turns, but Cyril was right there for me when I asked him to leave a step out and came through in our ride. The Ridge’s events are always a joy to attend, and beautifully run.”