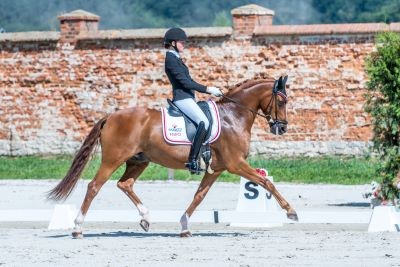 The French were unrivaled in the FEI Pony European Championships in Strzegom, taking home the gold medals in showjumping and eventing.

Both individual and team gold medals in eventing went to riders from France. Germany took silver, and Ireland finished with the bronze. The team Top 3 remained the same after dressage and throughout the next two trials.

The French squad was represented by: Zoe Ballot with Voltair De Lalande, Valentin Quittet Eslan with Winnetou, Mathieu Cuomo with Celeste Du Montier, and the best one in the team, Mae Rinaldi riding Boston Du Verdon, who won the individual gold medal. She took the lead after dressage, kept it through the cross-country in spite of time faults, and went clear in the jumping. The pair finished with the result of 28,4.

“I’m very happy with my individual victory, but also for the whole team. It’s a dream come true. Boston is a great pony; he is amazing in all three trials; he’s always very concentrated and I love him!” said the new European champion.

Silver went to Ireland’s Ben Connors with Cornafest Fred, who was clear in both the cross-country and showjumping, to finish with 30,03. Sophie Weening from the Netherlands took bronze riding Hip Hop – 30,04.

German riders were victorious for the third time, as they won the team and individual classifications, and went for the gold in the freestyle. One of them also established a new world record.

The individual medalists repeated their success during the Freestyle and took home double medals. The judges were once again most impressed with the ride of Germany’s Rose Oatley with Daddy Moon. The rider, finishing with the result of 89,700%, broke the world record established in 2015. Silver went to her teammate Antonia Roth with Daily Pleasure WE (85,090%), and bronze to Sophia Boje Obel Jorgensen from Denmark with Adriano B – 83,050%. Polish rider Veronica Pawluk with D’Artagnan 187 finished eighth, with the result of 76,970%.

There was no shortage of sport emotions in the individual final, the last rivalry at the event. After two rounds, the well-deserved gold medal went to the only rider that went clear over all of the 5 courses of the Championships – Jeanne Hirel from France riding Vedouz De Nestin.

Her teammate Marie Ann Sullivan with Ken Van Orchid finished second, with three penalty points. This confirms the great form of the French, who are also going home with a team gold.

The bronze medal was determined by a two-horse jump-off, which ended with the victory of Siebe Leemans with Voodstock de L’Astree.