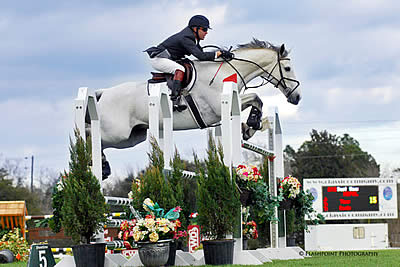 Jay Land pilots Nepal over an oxer to the win in the $25,000 EMO Welcome Class. Flashpoint Photography.

Valentine’s Day was sweet for the Land family of Alpharetta, Georgia when father Jay and daughter Frances were the only two to finish clean in the $25,000 EMO Welcome Class yesterday.  Jay Land turned in a fault-free first round in a time of 81.951 seconds riding his and wife Kim’s Nepal, while his daughter Frances rode her own Vieanne, also clean in a time of 78.514 seconds.  After turning in a jump off round in 42.9810 seconds, Jay Land and Nepal took the win while Frances and Vieanne accepted second place honors.  Theo Genn of Lebanon, Ohio rode Paradox, owned by Thomas Bruinsma, to third place in a first round time of 85.978 seconds with one fault.  Fourth place went to Scott Lenkart and his own Impulsive who turned in a first round effort in 76.930 seconds and four jump faults.

The Kastel Denmark Exhibitor Party under the VIP tent was a huge success during the $25,000 EMO Welcome class. Susan Benson, representing Kastel Denmark, hosted the reception which offered complimentary wine, beer and hors d’oeuvres for all.

The complete schedule for free, live web casting is as follows:

This Sunday the $35,000 Nutrena Grand Prix takes to the world class turf field and there is no better place to watch the action than the VIP tent.  Tables are only $325 a week and Sunday’s luncheon will be catered by the Gulf Coast Classic Company’s Official Restaurant Partner, Salute Italian. Salute Italian Seafood Restaurant is located in Gulfport and offers a fine dining experience in a casual dining atmosphere. They will bring their classic Italian dishes made from the finest traditional ingredients as well as coastal inspired seafood dishes to the VIP tent this Sunday.  For only $325, you and seven of your friends, family or clients can sample the award-winning Italian coastal cuisine and enjoy a complimentary bottle of champagne. Make sure to see Jonathan in the show office to secure your table today! 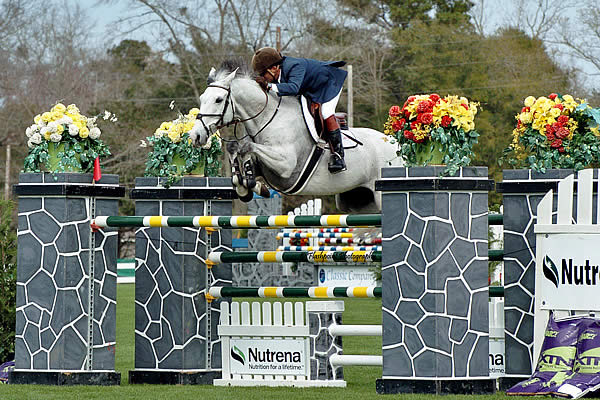 Gulfport, Mississippi [February 24, 2013] – What a day for Jay!  Jay Land and his own Nepal galloped away with the win in the $35,000 Nutrena Grand Prix today under perfectly clear skies and seventy degree weather at the Harrison County Fairgrounds and Equestrian Center.

Twenty horses took to the course designed by Michel Vailancort but only six returned for the jump-off.  Devin Ryan of Long Valley, New Jersey was first to go aboard Eagle Valley Partners, LLC’s Zosja *** and went clean in a time of 85.289 seconds. However, they incurred eight faults and a time of 37.817 seconds in the jump-off round which would finish them in fourth overall.  Second to go was Theo Genn of Lebanon, Ohio, riding Thomas Bruinsma’s Paradox *****.  The pair incurred four jump faults and a time of 84.309 seconds which would not qualify them for the jump-off, but placed them in tenth overall.  The next fastest four fault round was Bryn Sadler of Santa Fe, New Mexico riding Showcase 81 LLC’s Bon Giorno which, after earning a time of 80.670 seconds, would place them in eighth overall.

Devin Ryan returned to the grand prix field, this time aboard his own Calissandro, and after accumulating four faults and a time of 82.842 seconds, would finish in ninth place overall.  Theo Genn also returned to the arena, this time aboard his own Cola and qualified for the jump-off with their fault free round in a time of 85.753 seconds.  Although they went clean in the jump-off, their time of 42.640 seconds would put them in second place overall.  Next to go was Kelsey Van Ackeren of Austin, Texas riding her own Vernon G, but with four faults and a time of 87.368 seconds, the duo would place twelfth overall.  Bob Brawley of Flower Mound, Texas, riding DDM Equestrian, LLC’s Obelix, was the next clean round in the grand prix field with a time of 86.868 seconds.  Their jump-off round resulted in eight jump faults and a time of 39.389 seconds which would finish the pair in fifth overall.  Jay Land of Alpharetta, Georgia was next to go aboard his own Nepal and secured a clean round with a quick time of 86.806 seconds.  His subsequent clean jump-off round in a time of 39.107 seconds would win the class overall.

Devin Ryan again tackled the course, this time aboard No Worries, owned by Barbara Rowland, and went clean with a time of 82.808. But after an unplanned dismount in the jump-off round, the pair would finish in sixth place overall.  Holly Shepherd of Grand Bay, Alabama, winner of last Sunday’s $35,000 Adequan Grand Prix, rode Triompf, owned by Loretta Patterson, to a clean first round in 84.945 seconds, but after accumulating eight faults in 36.548 seconds in the jump-off round, would settle for a third place finish in today’s grand prix. Wilhelm Genn of Lebanon, Ohio riding his own Happy Z had four jump faults in his first round in a time of 80.112 seconds which would finish the pair in seventh place overall.  Son Theo Genn followed, this time aboard Bridlebourne Stables LLC’s Winchester, but with four faults in a time of 86.471 seconds, would finish in eleventh place overall.

“Michel [Vailencort] did a great job,” commented Land, “The course was very technical in some places and it took a very scopey and adjustable-strided horse and today, Nepal was really adjustable and he really jumped well. It was his day,” he smiled. “Nepal is an Argentine horse and we’ve had him since he’s been five.  My daughters and I have all brought him along, shown and won on him.  We call him our ‘utility player’ and lucky for me, today I got to ride him,” he added.

“There’s a tough group here. It’s always hard to win. The Genns are here and they have at least six or seven in a class; Holly [Shepherd] is here and she won last week. And, this is probably the only time we haven’t seen Wilhelm in the jump-off for how many years?” he laughed. “But he had his son Theo in there, and he gave me a good run.”

Land continued, “Luckily this week I got to go after them; the first week I had to go in front of them all and didn’t have the advantage to see how they all rode it.  Today I didn’t go as fast as possible, but fast enough to keep the pressure on,” he said.

“It’s obviously great to be in the winner’s circle.  It’s fun to be my age, doing what I love – it’s really great,” said Land.  “We had a bad accident at the end of the circuit last year and I’m just getting back now. It’s nice to be back,” he added.

Land continued, “This is such a great friendly place and everyone is so nice to us. Our girls have grown up riding here and we’ve had a good time. This is as good as show jumping as you would want to do and we’re just happy we’re here!” he added.