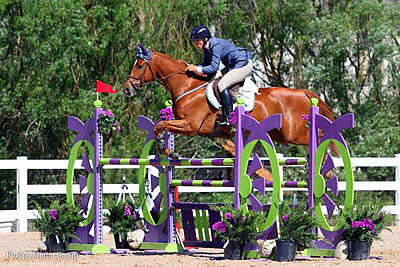 Parker, CO – June 6, 2014 – Janet Hischer decided to change up her summer plans and come to the Colorado Horse Park this year, and it’s already paying off. She and Cutler blazed through a speedy jump-off round in 39.935 seconds and took home first place in the $2,500 Open Jumper 1.30/1.40m on Friday morning in the Kathy and Brad Coors Family Grand Prix Arena.

The first to make the jump-off was Nicki Wilcox on J.E.S. Quito, sixth in the order, who ticked a rail coming out of the double combination to finish with four faults in a time of 44.029 seconds. Hischer and Cutler were next to go and set a time that proved unbeatable, though several tried.

Katharin Gualtieri and Castalano came closest with their time of 41.785 seconds. Courtney Frederick and Soulshine were also double clear and finished third with a jump-off time of 43.157 seconds, three seconds behind Hischer and Cutler.

“He’s half Thoroughbred, by a Holstein stallion, and I know he’s really fast,” she said. “I just cock up in the half seat. I show mostly in Southern California and see Rich Fellers all the time, so I get in the jump-off and pretend I’m Rich Fellers. Cutler is a little bit hot, and I just try to manage him and go.”

Cutler performed well today over the course set by designer Mauricio Garcia. Hischer said the course was “pretty technical.” She chose to add a stride in a five-stride line following a double combination that Cutler jumped “a little bit up in the air,” taking advantage of his adjustability to make the distance work.

Hischer, who owns and operates Twisted Tree Farm in Scottsdale, AZ, got Cutler three years ago from a friend who asked if she would take him because he wasn’t a good fit for the friend’s daughter.

“He was skinny and ugly, and everybody thought I was crazy,” Hischer laughed. “I brought him back home and played with him. He’s a character – he plays games. I don’t think he’s really a spooky horse, but he likes to make you think he’s spooky.”

She hasn’t competed in Colorado for six years, usually heading to Canada for Spruce Meadows, but she chose to return for all six weeks of Summer in the Rockies this year. She is especially happy to be in the area since her niece, Jackie Smith of Parker, CO, just had a baby, and she’s enjoying the Colorado Horse Park facility so far.

“It’s a lot of fun – a beautiful place,” she commented. “I really like the people here.”

Also competing Friday morning were young horses vying for the $1,000 Young Jumper 7/8 Year Old Championship. All five in the class successfully advanced to the jump-off, and three of the five were double clear.

Bjorn Ikast of Parker, CO piloted his own Spice Boy through the fastest jump-off in a time of 39.891 seconds to claim the win. Spice Boy competes in the 8-year-olds but is quite a bit younger than most of his competition, as he won’t turn 8 until Dec. 15.

“He’s a very late 8-year-old, but he seems to be doing great!” Ikast said. “He’s a really nice horse. I got him in Chile, so I called him Spice Boy. He is very good to turn and can turn very sharply, so it worked out for me today.”

Ikast noted today’s course was “friendly” and required him to ride fast in the jump-off.

“It was a lovely course,” he said. “I really like the course designer, Mauricio Garcia – it’s the first time I’ve ridden his courses. I’m really happy with it and I hope I will say the same after the Grand Prix tomorrow!”

Ikast also rode his 7-year-old Supernatural, who was first to go in the class, to third place with a time of 40.435 in the jump-off. He returned fourth in the order with Spice Boy and chased down Paige Coles’ time of 40.029 seconds with Springfield Hill, who ended up in second place as the top 7-year-old in the class. Coles came out of the ring with a big smile.

“He’s so much fun to ride!” she exclaimed. “I just got him in the fall of last year. He’s my baby. We’re still getting to know each other – we’ve only done four or five shows. He is awesome and has so much power underneath him. He’s willing to do anything.”

She also enjoyed the course and felt it was a perfect fit for Springfield Hill.

“It was really open, which is good for this horse especially,” she explained. “He just gallops up and jumps great off the longer stride coming out of the corner.”

Coles is from Wellington, FL, but is currently a student at the University of Denver. She has been coming out to Colorado to compete every summer since she was 12.

“The people are great in Colorado – they’re so nice,” she said. “The weather is awesome. I’ve seen the horse show grow, which is really cool. It’s a different scene.”

Jumper competition continues Saturday with the featured class of Summer in the Rockies: the $25,000 Holiday Inn of Parker Grand Prix. Click here for full results from Friday. Visit the Colorado Horse Park’s website and follow them on Facebook and Twitter for updates throughout Summer in the Rockies.