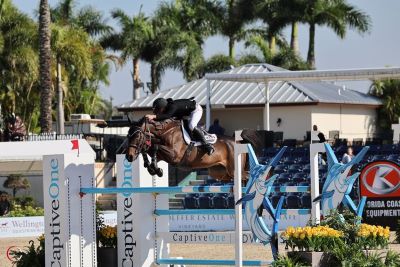 The first FEI week of the 2023 Winter Equestrian Festival (WEF) season ended with the CHF37,000 CaptiveOne Advisors 1.50m Classic in the international Ring on Sunday, January 15. Jad Dana (LBN) won the day aboard After Eight as the sun set over Wellington International.

Nick Granat (USA) designed a tricky twelve-obstacle course with a time allowed of 72 seconds. Fifty-nine riders vied for a clear round to take them into the jump-off. Only ten pairs managed to make it to the second round. In the end, it was Dana and his super mare, After Eight, a 2010 Swedish Warmblood (Diarado x Cardento) owned by Springhill Farm, with the quickest time of 37.70 seconds.

“She’s amazing and she’s been in top form; she won a grand prix two weeks ago and then she came out, was great in the first round and an even better jump-off,” said Dana of the mount he had a little over a year. “That was so fun to ride, and she makes it fun.”

The Vogel Adult Amateur Hunter 36-49 (Sec B) class helped conclude an exciting first week for hunters at WEF. The stars of the day were Julie Hogan and her lovely mare, Latoya, a 2013 mare by Languster Prydsholm, owned by The Ridge Farm LLC. Hogan and Latoya won three over fences classes and the under saddle to collect championship points.

“Everything went really smoothly today,” she said. “We had a really great day yesterday, winning both over fences, and we won the flat today, and I just wanted to go in today and put in a solid performance in the two over fences classes. My mare jumped really well and she’s a star.” 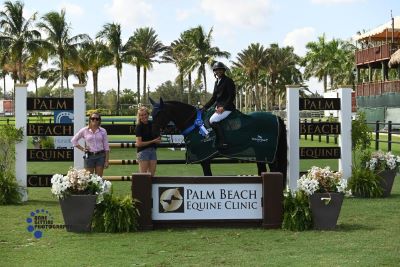 Wellington, FL – Sept. 5, 2021 – The ESP Labor Day horse show concluded with a second victory from the week going to Lebanon’s Jad Dana. Dana and After Eight edged out the competition in the $25,000 Palm Beach Equine Clinic Grand Prix to capture the lead spot in the victory gallop. The partnership mastered two tracks designed by Oscar Soberón (USA) as the fastest of five double-clear duos.

Early in the morning on Friday, Ashlee Bond (ISR) and Boheme de Fleyres, owned by Ashlee Bond Show Jumping, hit the ground running to take the blue ribbon in the $10,000 Bainbridge Companies 1.40m Open Stake. Only the fourth in the order, Bond and Boheme de Fleyres turned in a quick fault-free time of 38.74 seconds in the immediate jump-off to solidify themselves as the frontrunners and eventual winners.

In the Perfect Products 1.35m Stake on Saturday morning, Dana and Fleur-de-Lis’ Cherie, owned by Kathleen Gannon-Ledsome, ran away with the class as the clear-cut winners. Never letting up on the gas, Dana and Fleur de Lis’ Cherie went midway through the pack and tripped their jump-off timers without faults in a blazing 39.13 seconds. No other competitors were able to come close, giving Dana and his mount the first prize by nearly four seconds.

Sunday morning saw the Medium Junior/Amateur-Owner Jumper Classic, presented by Equiline, challenge a field of horses and riders on the Derby Field. In the end, only three-hundredths of a second separated the top two finishers, with the victory going to Caroline Drummond of Wellington, FL on her own Tsunami with a double-clear time of 40.66 seconds.

In his first hunter class ever, Alejandro Karolyi of Wellington, FL rode Emily Cherney’s Karma AB straight to the top of the leaderboard in the $2,500 USHJA National Hunter Derby, presented by Equiline. The partnership concluded the class as the clear victors after earning back-to-back scores of 86 for a final tally of 172, which included all four high-option bonus points from both the classic and handy rounds. A decorated jumper rider, Karolyi gave the hunters a shot for the very first time on Friday, and he proved to be a solid match for Karma AB, the 10-year-old mare that is making the switch from jumpers to the hunter ring.

The combined Amateur-Owner 3’6” Hunter/Junior 3’3” Hunter divisions, presented by Vita Flex, saw Adrienne Marciano of Collegeville, PA and her own Cooper ride to the championship rosette. Marciano and Cooper were the standout pair in the division after capturing four first-place finishes and a single second-place result to emerge as the clear leaders.