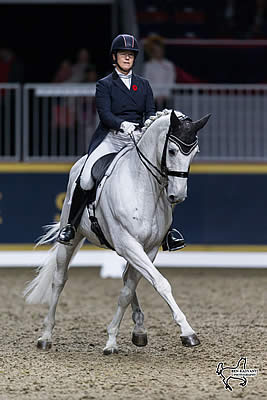 Doubling down on Derby fun, Tuesday evening’s Royal Horse Show performance opens with the impressive Knightwood Hunter Derby followed by the Dressage Derby, a new concept that will see four riders go head-to-head riding borrowed horses in a ‘knock-out’ format. Riders will have only minutes to get to know their mounts before entering the Coca-Cola Coliseum to perform their test. The winner of each ‘knock-out round’ will move forward to a second round in the hopes of being crowned the Royal Dressage Derby Champion.

Lyle, a member of the U.S. silver medal team at the recent FEI World Equestrian Games, will be making her first trip to Toronto in addition to her Royal Horse Show debut.

“I’ve always wanted to go to the Royal and I thought it was a fun chance to get to compete there,” said Lyle, who is based in Wellington, FL. “I have competed in some derbies in Florida before and I think they are really fun. The crowd loves them and they are a great test of rider skill.”

Joining Lyle in the Dressage Derby are Canadians Tom Dvorak and Jaimey Irwin along with Esther Mortimer of Guatemala.

“It’s the ultimate test of rider skill to have to ride a horse you don’t know and have never had a chance to watch or ride before,” said Lyle, who is looking forward to the challenge of riding an unfamiliar mount. “It’s an easy format for the crowd to understand because it makes sense and it is usually obvious which rider gets along best with their horse. Sometimes there’s also a lot of comedy involved! I grew up in pony club riding many different horses and I really enjoy the challenge of getting on and sorting it out in a few minutes. A lot of it is being able to read the horse and come up with a strategy.”

Prior to the Dressage Derby, Canadian Dressage Team veteran, Jacqueline Brooks, will retire her long-time partner, D Niro, in a fitting celebration at the Royal Horse Show. Brooks and the 19-year-old grey Swedish Warmblood gelding affectionately known as ‘Goose’ have represented Canada in international competition around the globe, including at the 2012 London Olympic Games and the 2013 World Cup Final in Gothenburg, Sweden.

Following the Dressage Derby, Brittany Fraser will perform a musical freestyle riding All In to close out the evening. The highest-placed member of Canada’s dressage team at the recent 2018 FEI World Equestrian Games in September, Fraser will demonstrate both the artistry and difficulty in choreographing required movements to the music of her choice.

Opening Tuesday evening’s Royal Horse Show performance, the elegance of high performance hunters will be on display in the $25,000 Knightwood Hunter Derby. Competitors from across the country have been earning points all year in the hopes of vying for the Lorna Jean Guthrie Challenge Trophy, presented to the overall Canadian Hunter Derby Series Champion.

From the $125,000 Canadian Show Jumping Championship on Friday and Saturday evenings, November 2 and 3, through to the $205,000 Longines FEI Jumping World Cup™ Toronto, presented by GroupBy, on Saturday night, November 10, the Royal Horse Show offers something each day for all fans of horse sport.

In featured entertainment, Australia’s Guy McLean will demonstrate his unique form of natural horsemanship throughout the ten-day Royal Horse Show while Pogo Puissance by Xpogo will take jumping to new heights as young athletes attempt to set records by jumping obstacles on pogo sticks.

More than 1,000 horses from around the globe will compete for $980,000 in prize money during the 10-day CSI4*-W Royal Horse Show. VIP Platinum and Gold seating, as well as group and individual tickets, are on sale now and moving quickly. All Royal Horse Show tickets include general admission to the Fair.

For more information on the Royal Horse Show, the marquee event of The Royal Agricultural Winter Fair, please visit www.royalfair.org/horseshow. 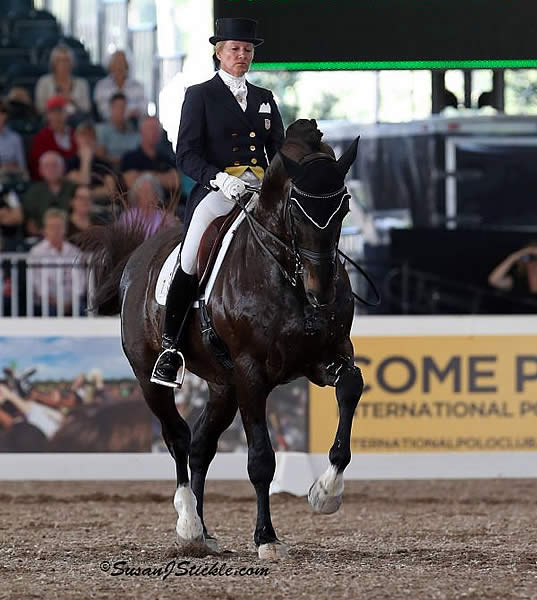 Loxahatchee, FL – March 19, 2013 – Tina Konyot and Calecto V have competed lightly but successfully in South Florida this winter, and now their bid to compete in the Reem Acra FEI World Cup Final rests on their performance in the March 21-24 International Horse Sport Champions Cup CDI-W.

The IHS Champions Cup, held at the IHS Champions Park at Equestrian Estates in Loxahatchee, is the final World Cup qualifier for the North American League. Horse and rider combinations must post two scores in designated World Cup qualifying events to be eligible to compete. The two highest-scoring combinations earn a place at the Final, which is slated for April 25-28 in Gothenburg, Sweden.

Konyot and Calecto V earned their first qualifying score in the Feb. 14-17 Florida Dressage Classic CDI-W, part of the Adequan Global Dressage Festival. They were awarded 76.775% for their Grand Prix Freestyle performance, the highest North American League score recorded to date on the road to qualification for the 2013 World Cup.

After the most recent World Cup qualifier, the Feb. 28 – March 3 Palm Beach Dressage Derby CDI-W, Canadian duo David Marcus and Chrevi’s Capital stood atop the leaderboard for the North American League with an average of 73.975% for their top two qualifying Grand Prix Freestyle scores. Fellow Canadians Jacqueline Brooks and D Niro were in second with an average of 72.600%.

To obtain the required second qualifying score and secure a spot in the World Cup Final, Konyot must compete in the IHS Champions Cup and post a score high enough to overtake Brooks in the standings. With two Canadians currently holding the top places, Konyot and Calecto V represent the last U.S. hopes for the World Cup Final.

The International Horse Sport competitions have proven to be essential stops for riders hoping to qualify for the World Cup Final. Several riders put themselves on the leaderboard with strong results at the historic Palm Beach Dressage Derby. Jaimey Irwin and Lindor’s Finest took third and Diane Creech and Devon L claimed fourth after both pairs earned their second-highest qualifying scores of the season at the Dressage Derby. Brooks also collected a key score there on her way to her current second-place standing.

Brooks, Creech and Marcus all plan to return to Equestrian Estates for what is shaping up to be a competitive Grand Prix division. Along with his potential World Cup mount, Chrevi’s Capital, Marcus will ride Don Kontes, with whom he finished third in the Grand Prix at the Dressage Derby. The Grand Prix also features several competitors who have been successful on the winter circuit thus far, including Lars Petersen and Mariett, winners of the Grand Prix and Freestyle at the Dressage Derby, and Shelly Francis and Doktor, who were second in both classes.

Brooks is ready to compete in the World Cup Final if given the opportunity, but thinks Konyot stands a good chance of taking over her spot. “Once Tina gets another score, then it will be Tina, David, then me,” Brooks said. “I’m ready to go if one or the other decides not to, and I feel now that D Niro is ready to go. I’m very confident that he can go into big stadiums and actually enjoy it.”

Konyot has been planning for the World Cup for some time and thinks that her horse is ready to put forth his best performance. “I feel quite confident,” she said. “I planned my schedule many months out. I’m comfortable with my planning right now, and I think he’s in a good place.”

“I will probably put a little bit more pressure on him in this last competition,” Konyot continued. “We all have to peak at the right moment, so I’m headed in that direction at this present time.”

If Konyot and Calecto V deliver the performance Konyot is hoping for, spectators at the Champions Cup will have quite the show as she goes head-to-head with other top competitors and tries to earn her remaining qualifying score.

The Champions Cup will be held at IHS Champions Park, also known as the Derby Showgrounds, a beautiful property in White Fences owned by Mary Ann and Walter McPhail and managed by International Horse Sport Palm Beach. The IHS Palm Beach Managing Partners include FEI riders and trainers Ed Borresen and Lars Petersen, together with well-known show organizers Noreen O’Sullivan and John Flanagan.

To learn more about International Horse Sport and the IHS Champions Cup CDI-W, go to www.ihspb.com.

Gundersen, who earned a score of 69.479% for her ride, described her sometimes challenging relationship with My Lady. “This is an alpha mare,” Gundersen explained with a smile. “She has a huge personality. She knows what she wants and she thinks she knows everything better. We have a little bit of discussion sometimes in the ring because she knows exactly how everything needs to be done and apparently I don’t know anything.”

But Gundersen has high praise for the mare. “She wants to go and do her best,” Gundersen noted. “She has presence and strength, and my favorite thing is when we come down the last centerline, she gets better and better.”