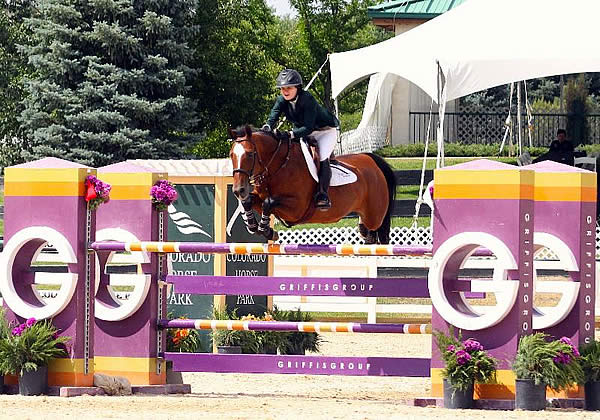 Jackson Brittan and Ugaf Come Out on Top of the $10,000 North American League Low Jr/AO Classic Presented by WeatherTech

International course designer Anderson Lima once again tested the horse and rider combinations with a higher level of difficulty to match the importance of the competition.

“You need to propose something to them with some challenge,” said Lima. “I like to make them get into the ring jumping, if it is possible, more jumps so they get better for the weekend. I like to make them jump doubles and liverpools during the week with easy distances – get-in-get-out. When they come to the Welcomes, the Prixes and the Classics, I can ask my questions. They can try to do a better job when you ask more.”

Kelsey Thatcher and Jackson Brittan competed horses in both classes. Thatcher, a student at University of Georgia, won the $20,000 Show Jumping Hall of Fame High Junior Amateur Owner Classic aboard Athena and earned the red ribbon with Everything. Brittan, a 15-year-old high school sophomore from Dallas, TX, and Ugaf claimed the $10,000 North American League Low Junior/Amateur Owner Classic Presented by WeatherTech. The two young, talented riders had similar reactions to Lima’s course and have both brought exceptional horses back from injury.

“It was definitely more challenging than it walked,” said Thatcher about the course. “It wasn’t too big and it didn’t look too technical but it got a lot of people. It was a careful course. Lima does a great job letting you go forward and, like the mountain oxer to the reverse Liverpool, you need to get them sitting back up. Same thing for the plank to the oxer. He (Lima) sets great courses. Making the time allowed tight, it’s a great thing. At any final, you need to be going along, so it’s a good thing to practice.”

“It was a pretty technical course,” said Brittan. “There were only three or four double clear rounds in the lows. It rode a lot harder than I thought it would. In the highs, I thought the skinny would be easy because my horse has a big stride. It was a six-stride and I thought that would be no problem for him. I thought I gave it a good ride but everyone was having that rail. It was a hard jump.”

Both Thatcher and Brittan have siblings who are also actively competing in show jumping.

“I have to say, I’m Maddie’s biggest fan and her harshest critic,” Kelsey Thatcher said. “It’s been fun – we have a little fun, healthy competition.”

Jackson has an identical twin brother named Spencer who also rides and competes. “We’re both really into riding,” he said. “We have a friendly sense of competition between us.”

The two also used similar approaches to tackle the questions proposed by the courses.

“It was really about being neat every time you land, just getting to the next jump,” said Thatcher.

“I went inside to jump number seven and was quick around the turns,” said Brittan. “I tried to turn neat around the turns and not go too wide. I have to watch time allowed with that horse because he has a really big stride and he doesn’t have a fast canter.”

Both winning horses have interesting backgrounds.

“Athena is amazing and everyone loves her,” said Thatcher. “I started bringing her back from an injury in August. Charlie (Jayne) gave her to me. She’s 12 now and she does have some big jumps left in her.”

“She’s a lot of horse to go from being ridden by Charlie who can hold her together and push her where he wants,” she said. “So we had to do a lot of flat work and I did several ‘chair in the airs’ in Florida. And, I’m not kidding, there are some great pictures online. It is supposed to be a quiet seven and she’d just leave in six.”

“The Jaynes (Our Day Farm) have been great about when I go to school,” Thatcher continued. “They keep her well flatted. We have to keep her in a ball so that we ask her to go forward and come back and keep her in a frame.  If you don’t teach her on the flat, then you can’t do it over the jumps.”

“We got him about a year ago,” said Brittan about his stallion, Ugaz. “He’s from Portugal. We tried him in quarantine and he jumped really well. He had an injury so we had to help him come back. We’ve been building him up and he’s jumping really well and he’s fit.”

“His personality is my favorite out of all my horses,” Brittan said. “He’s really confident and straightforward. He doesn’t spook or get timid or anything. He knows his job. I feel like his confidence helps mine. He seems like he knows what he’s doing. We started training with Hector Florentino and Stransky’s Mission Farms at the beginning of the WEF (FTI Winter Equestrian Festival) circuit. He’s a really good trainer and he’s helping me with this horse.”

Thatcher and Brittan have showed at the Colorado Horse Park for years.

“I grew up riding here starting out in the short stirrup,” said Thatcher. “I did millions of pony rounds. I can remember watching the prixes and being amazed. So, yeah, it is a little bit of home.”

“I was born in Denver and we’ve competed here every year,” said Brittan. “I love it. The footing is so much better. The Grand Prix ring has really nice footing. I am really pleased with the changes.”

“You don’t appreciate good footing until you’re there,” said Thatcher. “Oh my gosh, they did such a great job. I don’t know about you, but permanent bathrooms – that makes me really happy. It is the little things that count. They have done a great job. It is an excellent horse show. We are going to be here next week as well.”

Brittan will also be here to compete in Summer in the Rockies VI.

“Since my stallion was really good today, we’ll move him up to the highs next week and see how that goes,” he said. “We’re pretty excited.”