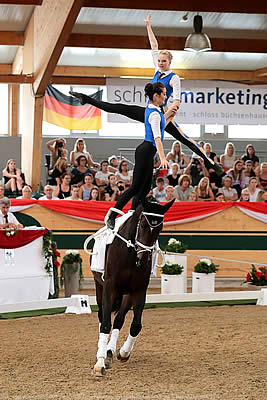 Lexington, Ky. – US Equestrian (USEF) is pleased to recognize Janie Salisbury as the 2017 USEF Vaulter of the Year and Salisbury’s coach Isabelle Parker as the 2017 USEF Vaulting Coach of the Year. Salisbury, a two-time FEI World Vaulting Champion for Juniors Pas de Deux bronze medalist, stood out among the seven applicants for her competition success and extracurricular activity.

Salisbury (Atherton, Calif.) began vaulting when she was seven years old as a member of the Woodside Vaulters out of Redwood City, Calif., and amassed several top results with Parker’s coaching and training. In addition to her FEI World Vaulting Championships for Juniors bronze medals in 2015 and 2017, she was the 2012 USEF/American Vaulting Association (AVA) National Vaulting Champion, 2013 Region 2 Champion, and 2015 USEF/AVA Reserve National Champion, among others.

Outside of vaulting, Salisbury has been active in her community. In high school, she led the Baking for Charity Club, where she helped organize bake sales with proceeds going to Pencils of Promise, a charity supporting children’s education in the developing world. She also volunteered for fundraising benefits and worked in the barns at the National Center for Equine Facilitated Therapy, a therapeutic riding facility that helps children and adults with neurophysiological, cognitive, sensory processing, and psychosocial challenges. Currently, Salisbury attends the University of Southern California where she intends to graduate with a Bachelor of Science degree in Business Administration and a minor in dance.

Parker (Redwood City, Calif.), co-founder and coach of the Woodside Vaulters, represented the U.S. in international competition for five years and earned her AVA Gold Medal in 1992. Parker has coached four National Champion A Teams and the U.S. team that won the bronze medal at the 1998 FEI World Equestrian Games™ in Rome, Italy. She is a two-time United States Equestrian Team (USET) Foundation Trainer of the Year, the 2013 AVA Mentor of the Year, an AVA judge and Technical Committee member, an FEI steward, and a member of multiple USEF vaulting committees. She is the current Chief Financial Officer of Summit Public Schools. This is Parker’s second time receiving the USEF Vaulting Coach of the Year Award.