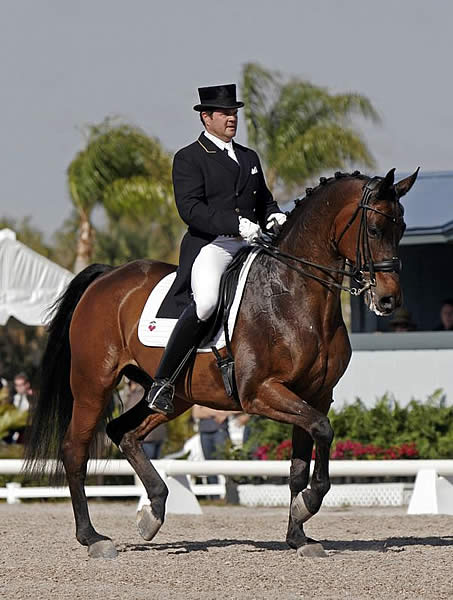 Wellington, FL – February 27, 2013 – Some of the world’s leading dressage horses will be competing in this year’s International Horse Sport Palm Beach (IHSPB) show circuit and that includes equine superstars from one of Europe’s leading stud farms – Denmark’s Blue Hors.

“We are so pleased that Blue Hors Stud has once again chosen to be one of our sponsors,” said IHSPB Managing Partner and Sponsorship Coordinator John Flanagan. “They are experts in assessing and breeding quality horses and their contribution to the sport of dressage cannot be underestimated.”

Esben Møller, the manager of Blue Hors, has developed an eye for quality when it comes to sponsoring horse shows and buying horses. “We have clear goals and a long-term outlook,” he said. “We’ve been very pleased with all our Dutch horses. Of course, there may be a disappointment now and then, but there are so many factors which will determine whether a horse will meet expectations: it has to stay healthy, grow tall enough, and show a willing character. There’s also some luck involved.”

Blue Hors must be doing something right. In the past 21 years, their horses have risen to success in the highest ranks of international competition. This includes competing in the Olympic Games, World Equestrian Games and Dressage World Cup. Blue Hors’ athletes have won the Danish Championships multiple times and Blue Hors’ stallion Don Schufro (by Donnerhall), a member of the 2008 Danish Olympic team who earned the Bronze Medal, has been rated Germany’s No. 1 dressage sire eight times.

Blue Hors successfully enlisted two of the world’s best riders to help represent the stud’s horses on the show circuit: Edward Gal and Lars Petersen. Blue Hors turned to Gal, who hails from the Netherlands, to ride the stallion Blue Hors Romanov (by Rohdiamant). Gal was an unusual choice as the stud has always favored Danish riders, but Blue Hors manager Möller said the stud has always sought to have its horses achieve international success. They felt that Gal and Petersen had the talent to help achieve that goal.

Petersen, who rides for Denmark but is based in Florida, is one of the leaders behind IHSPB and campaigns Blue Hors’ Gredstedgards Casmir (by Continue). Petersen, who operates Legacy Farms with his partner Melissa Taylor, rode for the stud from 1992 to 2002. He competed Blue Hors’ horses internationally, before he made the permanent move to Florida. Casmir is just one of many up-and-coming equine superstars that will be competing during the 2013 Florida season at the IHSPB beautiful show grounds.

International Horse Sport Palm Beach has been a driving force in South Florida dressage for many years. Their success in ensuring Florida is the place to be during the winter show season has enticed top riders and horses from throughout the world to flock to the Sunshine State every winter. And with the help of Blue Hors Stud, the 2013 season is no exception.

The IHS Champions Park consists of 10 rings suitable for national and international competition on over 50 acres, including 15 acres of parking, 150 horse stalls for international horses and another 200 temporary stalls available for the national shows. In 2011, IHS Palm Beach made major improvements in show facilities in order to provide competitors with superior show conditions. The most important upgrade was the installation of new footing in all of the rings at the IHS Champions Park at Equestrian Estates, a facility owned by Mary Ann and Walter McPhail that is the site of the Palm Beach Dressage Derby and IHS Series Shows. The upgrade in footing consisted of stripping the rings to the base and replacing the old footing with new GGT Footing, a polyester fiber mixture blended with sand, which is considered to be the premier arena footing throughout the world.

With improvements in footing, as well as the facilities for the comfort of riders, horses and spectators, IHS Palm Beach is well set to host the world’s leading dressage equines, their riders and their fans in 2013.

Thousands of horses and riders converged in West Palm Beach Florida from around the world to compete once again this winter, making this season the richest and most successful season ever for Dressage in Florida.  The ever-popular Wellington Classic Dressage (WCD) and Gold Coast Dressage Association (GCDA) shows at the beautiful Palm Beach County Jim Brandon Equestrian Center were joined this year by International Horse Sport Palm Beach (IHS) shows at the Equestrian Estates Horse Park.  Combined, these three Dressage organizations host more than 23 weeks of competitions year-round, including 6 International CDI competitions.

The premiere event of the winter season was clearly the World Dressage Masters CDI5* Series Presented by Axel Johnson Group.  The World Dressage Masters is one of the richest Dressage Series internationally, with only 4-6 shows hosted around the world, each boasting over 100,000 Euros in Prize Money (approximately $140,000).  The WDM CDI5*Palm Beach Show was hosted March 9-12, 2011 by Wellington Classic Dressage, with International Polo Club as Presenting Sponsor.  “We are honored to host this very prestigious show for 2011 and beyond, and to work with the WDM team and IPC to make this year’s event a resounding success,” stated John Flanagan, Managing Partner for Wellington Classic Dressage.  What an honor too, that America’s top rider, Steffen Peters on Ravel, owned by Akiko Yamazaki, took home the top prize by winning the WDM Grand Prix Freestyle with a score of 84.53%, followed by Sweden’s Tinne Vilhelmson-Silfven on Favourit with 77.90%, and US Rider Tina Konyot and Calecto V with 76.65%.  The 2012 WDM CDI5* Palm Beach is slated for January 26th-29th, 2012.

Wellington Classic Dressage’s eleven-show series kicked off high season with the Wellington Classic Holiday Challenge in December and wrapped up the winter season with the Wellington Classic Challenge III on the 1st of May.  The WCD series is held at the very popular Jim Brandon Equestrian Center, which boosts excellent footing and stabling, several competition rings, including a covered arena, riding trails and a Western Events area on over 111 acres.   Gold Coast Dressage Association, the local GMO hosted their centerpiece show also at Jim Brandon, the GCDA Opener CDIW.  International Horse Sport hosted Florida’s traditional favorite and longest-running CDI, the Palm Beach Dressage Derby CDIW, as well as 4 other shows at the beautiful Horse Park at Equestrian Estates in nearby Loxahatchee, which this year underwent many upgrades and improvements.