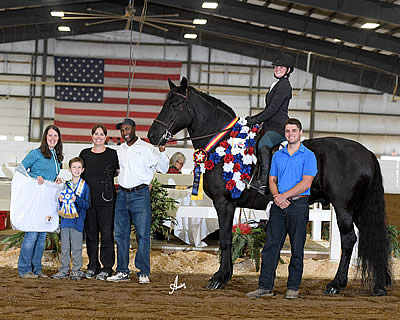 Springfield, Ohio (November 4, 2019) –Nearly 300 classes were presented over five days in October when the International Friesian Show Horse Association (IFSHA) 2019 World and Grand National Championships came to the Champions Center in Springfield, Ohio, but it didn’t take long for N2 Saddlery to find its Sport Horse the Week: Part-Bred Friesian English Pleasure World Champion, Harper JR, owned by Lauren Riehle of Kernersville, NC, and competed by amateur rider Anaiah Powers, who trains under one of the top handlers ever to enter a Dressage at Devon ring, Bruce Griffin, of Griffin Sport Horses in Virginia.

Griffin, whose professional training career with Friesians like Harper JR began under the tutelage of great horsemen like Jeff Wonnell and Barbara Cross, says, “It’s a dream come true to be blessed with such talented and versatile horses.” The 2019 World Champion and N2 Saddlery Sporthorse Award winner had previously earned overall Part Bred High Point and overall High Point in Hand Horse titles at the 2016 IFSHA World Championships.

But the real story of this gentle giant, says Riehle, just keeps growing. “I lucked into my dream horse. I met him the day he was born,” she says of her nine-year-old, 17.3-hand (“he just keeps growing!”) Friesian/Percheron/Thoroughbred cross.  “You may not see the Thoroughbred but he’s got a whole lot of go. He’s also a kind, fun guy and he’s great with Anaiah.”

When Riehle brought the young Friesian to Griffin Sport Horses, she told its trainer, “I just want a nice trail horse. Let’s take our time.” Then three months later Bruce called her back and told her, ‘I don’t know what you think you got, but you’ve got yourself a show horse here.’”

The N2 Saddlery Award recognition couldn’t have come at a better time. “Saddles have always been a challenge for him. So thank you, N2, for your sponsorship and this lovely award.” Because, as Riehle lovingly notes, finding anything to fit her great big World Champion can be a challenge, “Do you know how hard it is just to find a 90” blanket? Ninety inches – I’m not kidding!”