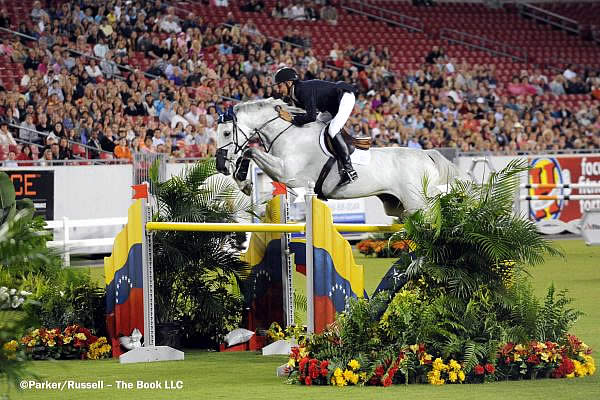 Photo By: Parker/Russell – The Book LLC.

East Norwich, NY – March 27, 2013 – Hunter’s Moon Farm is pleased to announce that Olympian Mario Deslauriers will be joining its full service hunter/jumper facility in April of 2013, alongside current trainers Pamela Polk and Kevin Kirk. Located only 28 miles from New York City on Long Island’s prestigious Gold Coast, Hunter’s Moon Farm is a 60-acre facility offering top notch training and boarding services for riders of all levels. Deslauriers is one of the world’s top riders and trainers, having won the 1984 World Cup Finals at just 19 years old.

Deslauriers is originally from Bromont, Quebec, and began riding at a young age with his father, Roger. During the 1984 Olympic Games in Los Angeles, Deslauriers was part of a three-way jump-off for the individual bronze medal. He has competed in over 100 FEI World Cup Qualifying competitions, and as a two-time Canadian Show Jumping Champion, Deslauriers has represented Canada at every major international event. After changing his citizenship, Deslauriers represented the United States at the 2010 Rolex/FEI World Cup Final and the 2010 Alltech FEI World Equestrian Games.

“We are thrilled to have Mario training at Hunter’s Moon Farm,” noted manager Jennifer Griffin. “I have known Mario for many years, as we are both originally from Canada, so it is familiar and comfortable from the start. He and his family have made their life in New York City and Long Island, so the location of Hunter’s Moon is convenient for them, and overall it’s a great fit for everybody.”

Deslauriers is also excited about the new partnership and is looking forward to a bright future. “We had been thinking about this for a while, and when I came in contact with Jennifer, I thought it was a great idea for us to team up,” he expressed. “I think Hunter’s Moon Farm has a great facility and it’s a great location, so we are very excited.”

Hunter’s Moon Farm and trainers Deslauriers, Polk, and Kirk plan on welcoming their spring clients with an active 2013 show season and expect to attend prestigious events such as the Old Salem Spring Horse Shows, the Lake Placid Horse Shows, and the Hampton Classic.

The private facility at Hunter’s Moon Farm features a state-of-the-art stable with updated stabling and individualized turnout. There is a large outdoor ring with show quality jumps and Travel Right footing. Hunter’s Moon Farm also has direct access to the Muttontown Preserve with miles of trails. This pristine facility offers the best care and training possible for horses and riders.