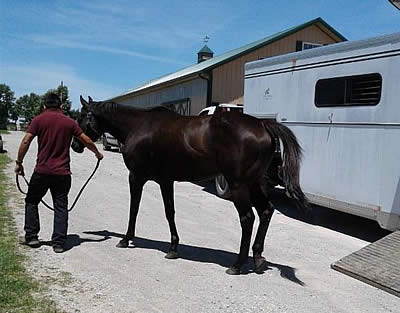 GEORGETOWN, KY – JUNE 14, 2019 – Hogy, the multiple graded stakes winner, has been retired from racing and will be pensioned at Old Friends, the Thoroughbred Retirement Farm in Georgetown, KY.

The near-black gelding launched his career at Arlington Park in 2011 capturing his first three starts, including the Brian Barenscheer Juvenile Stakes at Canterbury Park. He earned his first graded stakes in 2013 in the grade 3 Hanshin Cup Stakes, again at Arlington. In 2017 he set a track record for 5½ furlongs in the Colonel Power Stakes at Fair Grounds, while defeating Old Friends retiree — and that day’s 4-5 favorite — Green Mask.

After a defeat in the grade 1 Breeders’ Cup Turf Sprint at Del Mar, Hogy went on the following year to capture the grade Canadian Turf Stakes at Gulfstream.

“It’s always rewarding to pension one of racing’s great warriors,” said Old Friends founder and President Michael Blowen. “Hogy has seen it all and done it all — multiple tracks, multiple surfaces, competing in claimers up to grade 1 stakes. Now we hope he will just enjoy being loved and admired by his friends and fans.”

Now 10, the gelding arrived at Old Friends on June 14 with owner Hui in tow. “Old Hogy,” Hui noted, “could not be in better hands.”