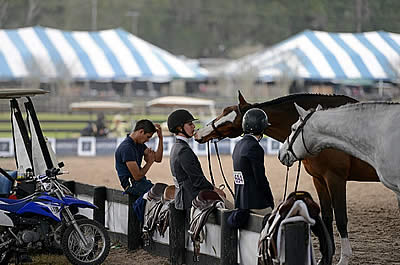 Stalls Are Filling Up Fast

Have you entered for the HITS Ocala Winter Circuit in Ocala, Florida? Use our Online Entry system to enter!

Entries must be POSTMARKED by January 3.

The HITS Ocala Winter Circuit offers a number of feature events throughout the circuit, including:

OCALA, FL (March 21, 2012) – Kate Conover of Ocala, Florida and Redfield Farm’s Peron captured the grand finale for hunter riders at HITS Ocala when they scored the top prize in the $10,000 Devoucoux Hunter Prix to put a bow on the 2012 HITS Ocala Winter Circuit.

“It was a challenging course that was set in the grand hunter ring,” said Conover. “There were lots of new jumps out there that we had not seen throughout the circuit and they were a nice touch.”

The two-round classic featured 51 horse-and-rider pairs on a course designed by Doug Russell of Ocala, Florida. At the end of the first round, it was Megan Edrick of Ocala, Florida and Liz Hudspeth’s Fairfax in the lead with a first round score of 87. In the second round, Edrick received a 76 for a total of 167 points, which would eventually finish in ninth place.

END_OF_DOCUMENT_TOKEN_TO_BE_REPLACED

OCALA, FL (March 12, 2012) – Purina Mills was on hand this weekend at HITS Ocala as the title sponsor of the $50,000 Purina Mills Grand Prix, presented by Pfizer Animal Health. The weekend was full of Purina Mills sponsored festivities and Purina sponsored rider Aaron Vale, of Morriston, Florida, put the exclamation point on the weekend when he captured the coveted first place prize in the Grand Prix aboard Bonnie Smith’s Tibor. To put the icing on the cake, he also won a ton of Purina Mills feed through the Purina Mills Rider’s Bonus.

Canada’s Danny Foster of Milton, Ontario designed the course, and saw 33 competitors attempt to conquer it.

“It’s been awhile since I’ve won a big Sunday Grand Prix and I was hoping to do it this circuit, so I was pretty thrilled,” said Vale, who showed two mounts on Sunday and finished in tenth place aboard Honeyland’s Douglason, owned by Doug’s Crew. “I think Danny [Foster] did a fantastic job today giving us a big course to jump. The line to the triple combination gave a lot of difficulties today and the six strides made the horses kind of dive at the jump and take a down. I was able to do seven strides with both of my horses and was able to sneak them through it. The jumps came up quick and there was a lot of riding to do in 88 seconds. There were 14 fences and it was about the same time allowed for a 12 jump course, so it kept you busy.”

END_OF_DOCUMENT_TOKEN_TO_BE_REPLACED

Ocala, FL – March 12, 2012 – It was an incredible night for the 2012 $10,000 USHJA International Hunter Derby at the HITS VI Ocala Winter Finals. Spectators gathered together as the anticipation continued to rise, waiting to see who would take home the victory. In the end, it was SBS Farms’ Jennifer Alfano who executed brilliant rides throughout the two-round event, rising to the top of the leaderboard with four horses. She and her veteran mount Jersey Boy took the top honors and led the victory gallop, proving unbeatable throughout the competition. Alfano also guided Miss Lucy to the second place finish, completing flawless rounds and earning top scores from the judges.

The evening began as riders were tested over a classic hunter course, with the top 12 horse and rider combinations advancing to the handy hunter course. The scores earned in the classic hunter round were combined with the handy hunter round, combining the two round totals for the event’s overall results. The course definitely proved to be no easy feat. It mimicked a picturesque hunt field, testing horse and rider alike as they navigated the course and vied for the top honors and the chance to make it into the esteemed top 12. Jersey Boy took an early lead with the high scores in the first round totaling 187 points from the panel of judges, and Miss Lucy did not fall far behind with her first-round score of 170 points.

END_OF_DOCUMENT_TOKEN_TO_BE_REPLACED

OCALA, FL (March 9, 2012) – Michael Hughes was all smiles at the conclusion of Thursday’s $25,000 SmartPak Grand Prix, presented by Pfizer Animal Health, at HITS Ocala. The sixteen-year-old from Allendale, New Jersey posted the only double clear round of the day to win his first-ever Grand Prix aboard Drumnacross Farm Ltd.’s Mac Arthur.

“My dad [Eammon Hughes] and I picked this horse to be my first Grand Prix horse because of his speed and scope,” said Hughes. The decision paid off this week as Hughes cashed a $7,500 first-place check.

Course Designer Danny Foster of Milton, Ontario challenged 30 horses and riders to 13 obstacles in Thursday’s class, which included a triple combination at fence six, a double at fence nine and a sizable final effort at fence 13.

“I designed the course to make it challenging, but not so big,” said Foster. “It was long, so the horses got a little tired.”

END_OF_DOCUMENT_TOKEN_TO_BE_REPLACED

OCALA, FL (March 7, 2012) – Emma Sullivan of Lafayette, Louisiana rode to victory under the lights on Saturday in the $15,000 Marshall & Sterling Child/Adult Jumper classic at HITS Ocala. She and Thinkslikeahorse’s Elder were the winning pair out of 65 who showed over International Course Designer Jack Robson’s first and second round tracks.

“I was so excited when I won – it was unbelievable! I really love this horse and he has been so much fun to ride,” said Sullivan. “It was a really difficult course and I saw some really fast rounds, so I knew the last turn to fence four had to be tight enough to win. You always risk a rail, but luckily we did it. I’d really like to thank my trainer, Aaron Vale, for everything and letting me ride this great horse, and my parents for being there.”

Robson, of Coronado, California presented 12 obstacles in the first round and repeated six in the jump-off with plenty of challenges in between.

END_OF_DOCUMENT_TOKEN_TO_BE_REPLACED

Ocala, FL – March 5, 2012 – The HITS V Ocala Tournament saw nothing but success from SBS Farms as Jennifer Alfano scored high ribbons and championship honors aboard horses throughout the hunter divisions. Jersey Boy came out at the top of the field in the High Performance Working Hunter division, taking home the reserve championship honors during his second week showing at HITS Ocala.

The talented duo earned the first and second place ribbons for their efforts over fences, as well as the first place finish for their picturesque handy round. Alfano is gearing up for the $10,000 USHJA International Derby in Ocala, FL, this Saturday, March 10. Shortly after their appearance in Ocala, the team will head to the Palm Beach International Equestrian Center in Wellington, FL, for the Winter Equestrian Festival where they will compete as the defending champions of the $50,000 USHJA International Hunter Derby.

END_OF_DOCUMENT_TOKEN_TO_BE_REPLACED

“This is one of the best classes offered each week in my opinion,” said Leffler, one of the most consistent and talented High-Performance riders to show in both hunters and jumpers. “It’s just a fun event for everyone – the riders, owners and the people that come and watch – everyone seems to enjoy it.”

END_OF_DOCUMENT_TOKEN_TO_BE_REPLACED

OCALA, FL (February 24, 2012) – Tracy Fenney banked her eighth Grand Prix of the qualifying season with a win in yesterday’s $25,000 SmartPak Grand Prix, presented by Pfizer Animal Health, aboard MTM Farm’s MTM Centano to become eligible for her third appearance in the Pfizer $1 Million Grand Prix. No stranger to Pfizer Million glory, Fenney appeared in HITS-on-the-Hudson’s big ticket class in both 2010 and 2011 with two top twenty finishes to show for it.

Fenney, of Flower Mound, Texas leads the way in the 2012 Pfizer Million Rider Rankings with $43,500 in prize money and has her sights firmly set on September’s offering. She stole first place in the preliminary Rider Rankings from former Canadian Olympian Jill Henselwood with two second place finishes in last week’s Grand Prix.

Yesterday’s win was Fenney’s third during the HITS Winter Circuit in Ocala and MTM Centano’s huge stride ate up Course Designer Ken Krome’s tracks. He presented technicality over size to both horse and rider with a water obstacle at fence number four as well as a double and triple combination in the second half of the course.

END_OF_DOCUMENT_TOKEN_TO_BE_REPLACED

Ocala, FL – February 22, 2012 – The success within the hunter rings continued this week for SBS Farms at the HITS III Ocala Winter Festival. Professional rider Jennifer Alfano guided numerous horses to the top honors this past week, including riding the young Maggie May to the High Pre-Green Hunter Championship.

Maggie May is a six-year-old Bradenberger mare owned by Billie Steffee, who Alfano showed to the championship tricolor in the High Pre-Green Hunter division. The young mare is always improving, and the pair took two blue ribbons over fences and the second place award for their efforts in the under saddle.

“She has been great; I am really excited about her this year. She keeps getting better and better every week, and she is really growing up a lot,” Alfano explained. “It’s really fun to be a part of her coming along, and being able to watch it all unfold.”