The conditions were not ideal, with fifty-degree weather and rain. But Danny Foster’s courses rode well for Hobbs and her two horses and, despite the cold and rain, they delivered outstanding performances.

“Southern River is 100% Thoroughbred,” shared Hobbs about her twelve-year-old partner. “I’ve had him since he was about three and a half years old, and he’s a super-fast, careful and brave horse. He won the first day at Culpeper, and he went in and won the second day as well. That’s him. He’s a winner. He enjoys winning. The faster you go, the better he jumps.”

END_OF_DOCUMENT_TOKEN_TO_BE_REPLACED

CULPEPER, VA (April 24, 2012) – Canadian Olympian Jill Henselwood aboard Juniper Farm’s George continued her journey towards the Pfizer Million and the 2012 Olympics with a big win at Commonwealth Park in Sunday’s $40,000 HITS Grand Prix, presented by Pfizer Animal Health. As she prepares for the Nations Cup Series in Belgium and Austria, Henselwood spent last week in Culpeper, Virginia where she also picked up wins in Friday’s $15,000 Brook Ledge Open Jumper Prix and Thursday’s $2,000 Level 7 Jumper.

“I came to Virginia to make sure [George] is on his game and I knew we would be guaranteed good weather since there is snow at home,” said Henselwood. “The venue and the competition were super. These Virginia riders are always quick, so it was great preparation.”

Fellow Canadian Danny Foster of Milton, Ontario designed the course and presented riders an immediate jump-off option. Foster crafted a 14-obstacle track, which included three double combinations. Faults were scattered as his course proved to be challenging, but attainable. Ten were clear over the first round course, but only two managed to produce double clear efforts – Henselwood and Laura Linback of Mundelin, Illinois in the irons of Woodrun’s HH Dauphin.

END_OF_DOCUMENT_TOKEN_TO_BE_REPLACED

CULPEPER, VA (April 23, 2012) – Accomplished duo Jane Gaston and her own Lumiere  came out on top in Saturday’s $5,000 Devoucoux Hunter Prix to highlight the Commonwealth National at HITS Commonwealth Park in Culpeper, Virginia.

Gaston, who was a ribbon winner in last year’s inaugural Diamond Mills $500,000 Hunter Prix Final at HITS-on-the-Hudson, is on track for a return visit to the year-end spectacular for hunter riders this September. After competing in three Devoucoux classes this winter at HITS Ocala, Gaston now has banked four qualifying classes and will look to the July shows at HITS Culpeper to seal her position in the starting field for the return of the Diamond Mills Hunter Prix Final.

“I got a good start on qualifying at Ocala,” said Gaston of The Plains, Virginia. “My only regret is that I didn’t spend more time there. We were there for three weeks and it was such a pleasant place to show. Next winter, I plan on spending a lot more time there.”

END_OF_DOCUMENT_TOKEN_TO_BE_REPLACED 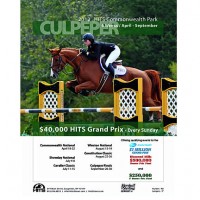 CULPEPER, VA (March 7, 2012) – As the countdown to HITS Championship Weekend is well underway, East Coast riders will look to HITS Culpeper for  pivotal qualifying opportunities. Weekly $40,000 Grand Prix will give High-performance riders the chance to punch their ticket for the third annual Pfizer $1 Million Grand Prix. In addition, HITS Culpeper will host five $5,000 Devoucoux Hunter Prix, all of which will qualify for the Diamond Mills $500,000 Hunter Prix Final and five $1,500 HITS Hunter Prix as qualifiers for the all-new $250,000 HITS 3’ Hunter Prix Final. All three big-ticket classes will meet at HITS Championship Weekend at HITS-on-the-Hudson in Saugerties, New York September 7-9, 2012 to crown their champions.

The HITS Culpeper Show Series will get underway when the Commonwealth National kicks of hunter/jumper competition April 18-22. Riders return on July 6, with two consecutive weeks of competition during the Showday National, July 4-8, followed by the Cavalier Classic, July 11-15. August brings two more weeks of competition with the Winston National, August 15-19, and the Constitution Classic, August 22-26. HITS will close out the 2012 season Virginia during the Culpeper Finals September 26-30 while introducing the first qualifying opportunities for the 2013 Pfizer Million.

END_OF_DOCUMENT_TOKEN_TO_BE_REPLACED

CULPEPER, VIRGINIA (October 7, 2011) — Six weeks of show jumping, which started in April at HITS Commonwealth Park, concluded this past Sunday with big prize money, record-breaking entries and tons of exciting year-end show jumping at the Culpeper Finals. The final show week of the year for the HITS calendar delivered and set a promising precedent for next year’s show jumping opportunities.

After the 2011 Pfizer $1 Million Grand Prix drew crowds to HITS-on-the-Hudson as the top Grand Prix and Hunter riders from around the world rode for serious prize money, momentum was building for the Culpeper Finals. Riders caught Pfizer Million fever and transitioned from HITS-on-the-Hudson to Culpeper with ease to get a jumpstart on qualifying for the 2012 $1 Million Grand Prix. Commonwealth Park attracted impressive numbers for last week’s special year-end classes, serving as a strong finish to the HITS’ show jumping circuits.

$25,000 Junior/Amateur-Owner Jumper High Classic
Junior and Amateur-Owner Jumper riders were rewarded with a $25,000 purse in the High Classic on Sunday as a field of 18 competed over a course designed by Olaf Petersen Sr. of Paehl, Germany. Amateur rider and seasoned Grand Prix veteran Laura Linback of Mundelin, Illinois took home the blue ribbon after posting the fastest double-clear effort aboard Woodrun’s Casino.

END_OF_DOCUMENT_TOKEN_TO_BE_REPLACED

“I am really pleased with [By the Way’s] performance and it was a great way to end our year,” said Gogul. “I think he is quite a special horse and I will probably show him in the Pre-Green Division again next year since we don’t want to hurry him along.”

After Gogul’s win, he is excited to look ahead to an appearance in next year’s second-ever Diamond Mills $500,000 Hunter Prix Final with By the Way at HITS-on-the-Hudson in Saugerties, New York.

Kate Conover rode Redfield Farm’s Peron to a second-place finish in the feature event for hunter riders during the Culpeper Finals.

“[Peron] is a special horse,” said Conover. “Emil Spadone imported him a few years ago and he is so much fun to ride.”

END_OF_DOCUMENT_TOKEN_TO_BE_REPLACED

CULPEPER, VIRGINIA (August 22, 2011) — Patty Stovel and Shoal Creek Stables’ Kenya gained the momentum they needed in Culpeper to capture Saturday’s $5,000 Devoucoux Hunter Prix to highlight a week of tough competition in the hunter rings of the Winston National at HITS Commonwealth Park in Culpeper, Virginia.

The duo’s latest victory marks their third triumph in a Devoucoux class this summer as they topped the field of 22 that showed over course designer Rian Beals’ first-round course. “Kenya is getting better as the summer goes on and that is a good thing,” said Stovel. “I am very fortunate to have a great owner who let us take our time with this horse.”

The last time the duo showed at HITS Culpeper they scored the blue at the Cavalier Classic in the featured class for hunters. Then, a few weeks ago, they struck glory again topping 70 starters at the NY Horse & Pony Show at HITS-on-the-Hudson in Saugerties, New York proving they are one of the teams to beat in the Diamond Mills $500,000 Hunter Prix Final.

Going into the weekend, Stovel and Kenya were eighth in the current Rider Rankings for the Diamond Mills Hunter Prix Final with 224 points. Saturday’s win will help to push them into the top five with only two qualifiers left before the big weekend on September 10-11 in Saugerties.

“I have said it before. This horse can win on any given day!” said Stovel. “There will be some great horses and great riders there and I am sure hoping that we are up for the challenge.”

END_OF_DOCUMENT_TOKEN_TO_BE_REPLACED

CULPEPER, VIRGINIA (August 22, 2011) — Jennie Edwards and her own Welcome rose to the top when she won the blue in the USHJA Tad Coffin Zone III Junior Equitation Finals on Saturday night at HITS Commonwealth Park in Culpeper, Virginia.

Edwards of Jacksonville, Florida is a seasoned equitation rider and trains under the tutelage of her aunt, Ginny Edwards at Hidden Hollow Farm. In all, 33 riders navigated course designer Jerry Dougherty’s route, and 12 of the top riders were invited back to show on the flat. After the flat phase, the top four were brought back for additional testing over fences, after which, Edwards emerged as the winner.

“I got this horse back in March and he’s been such a great ride,” said Jennie Edwards. “I’ve learned so much on him already. This is one of the most important events I look forward to each year, so winning it was just great. I couldn’t believe when it happened.”

For her efforts, Jennie Edwards won a Tad Coffin Performance Saddle, and a cooler donated by Gary Baker, while Ginny Edwards won a $300 trainer award for helping to guide her student to the crown.

“My goals this year were to qualify for the USEF Pessoa Medal Finals, the regional ASPCA Maclay Finals and this Final,” added Edwards. “I’ve been able to do all of that so far, so this year has been really successful for me. I’m very lucky to have my aunt as my trainer – she is so caring and hardworking, and it made the win a lot more special with her there.”

END_OF_DOCUMENT_TOKEN_TO_BE_REPLACED

CULPEPER, VA (July 22, 2011) – HITS Culpeper enjoyed two strong weeks of competition during its July shows – the Showday National and the Cavalier Classic – with higher than expected entries as exhibitors flocked to Culpeper, Virginia from all corners of the country. An action-packed schedule, which included two more qualifiers each for the Pfizer $1 Million Grand Prix and Diamond Mills $500,000 Hunter Prix Final, along with new Grand Prix footing, made Culpeper a “must show” for many exhibitors looking to punch their ticket to this year’s Grand Finale in September.

The Showday National opened up the two-week series and was the first opportunity riders had to test out the newly resurfaced Grand Prix ring. “I thought the footing was excellent and the horses all jumped well,” said Ramiro Quintana of West Palm Beach, Florida who, aboard November Hill Farm’s Versace, captured the $1,000 Level 6 Morningside Training Farm Jumpers during the Showday National. “With all the improvements that are being made in Culpeper I am sure it will once again be considered one of the top destinations in American show jumping.”

Culpeper catches Pfizer Million fever
During the Showday National, Kevin Babington of Gwynedd Valley, Pennsylvania wasted no time at all getting comfortable with the new Grand Prix footing when he rode his own Mark Q to the blue in the $40,000 Strongid C 2X Grand Prix, presented by Pfizer Animal Health, and picked up his second of eight Grand Prix needed to become eligible for the Pfizer Million. Silvio Mazzoni of Leesburg, Virginia was all business on Sunday when he won the $40,000 Purina Mills Grand Prix, presented by Pfizer Animal Health, during the Cavalier Classic aboard his own Remonta Habano, which propelled him into the top 10 of the Pfizer Million Rider Rankings with more than $26,000 in prize money.

END_OF_DOCUMENT_TOKEN_TO_BE_REPLACED

Prior to the start of Sunday’s main event, the Topaz Vaulters, an equine gymnastics spectacle, gave a special performance to kick off an afternoon of show jumping. Course designer Jose “Pepe” Gamarra of Ellenton, Florida made the $40,000 class his debut at HITS Commonwealth Park. His first round saw seven horse-and-rider combinations go clear and then return for the jump-off.

“The course was great,” said Mazzoni, who gained momentum for Sunday’s victory after a fourth-place finish in Friday’s $15,000 Brook Ledge Open Jumper Prix with Remonta Habano. “It was a very technical track, which asked a lot of the right questions.”

First to return in the jump-off was Alexa Lowe of Upperville, Virginia aboard Windsor Farm Sales’ Amicello. The team wasted no time in setting the Great American Time to Beat at 45.306 seconds with a clear effort.

Mazzoni followed and easily took the lead with a blistering time of 39.741 seconds.