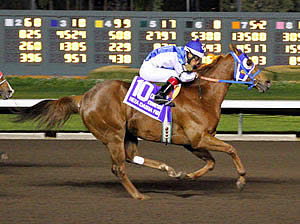 The sophomore gelding earns the top honor after a dominating year.

A homebred racing for the Meneely family’s S-Quarter K LLC of Kennewick, Washington, Heza Dasha Fire was undefeated in five starts during the year. He began with a victory in the Golden State Derby (G2), followed by a win in the Los Alamitos Super Derby (G1). In a climactic finish on the year, the Jose Antonio Flores trainee took on both older horses and the classic 440-yard distance for the first time and won the Champion of Champions (G1) impressively. Ridden by Cruz Mendez in all his starts, he won every race by daylight and earned $726,432.

Sired by Walk Thru Fire and out of the Mr Jess Perry mare Dasha Freda, Heza Dasha Fire was also the champion 2-year-old gelding in 2014 and has a career record of 11 wins in 12 starts and career earnings of $1,689,388.

S-Quarter K also celebrates as the champion breeders, and his half-brother, Ima Fearless Hero, was named the champion 2-year-old gelding.

Two industry leaders were also recognized for their work in the industry over the past year.

Texas Quarter Horse Association Executive Director Val Clark was honored with the Mildred N. Vessels Special Achievement Award for her work in supporting the Texas horse industry and the racing industry as a whole. Clark is a huge ambassador, and her work affects everything from youth programs to Texas-bred race payouts to legislative efforts.

AQHA Past President Johnny Trotter was awarded the Gordon Crone Special Achievement Award. Trotter works tirelessly as one of the country’s largest feedlot owners, horse breeder, community leader and philanthropist. His many accomplishments in the industry, including his recent stint on the AQHA Executive Committee, has made the industry a better place.

The 3-year-old gelding, bred and raced by S-Quarter K LLC of Kennewick, Washington, is the 106th horse in total to earn the award (the awards prior to 2002 were given retroactively).

The Supreme Race Horse award recognizes a racing American Quarter Horse who during his or her career earns $500,000 or more, wins two or more open Grade 1 stakes races and at least 10 races.

The horse is by Walk Thru Fire and is out of the Mr Jess Perry mare Dasha Freda. Last year’s champion 2-year-old gelding, Heza Dasha Fire is a leading contender for championship honors this year.