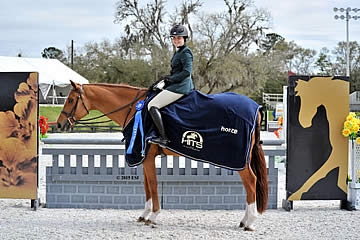 OCALA, Florida (March 7, 2015) Hasbrouck Donovan, of Gainesville, Florida, and Cymplify showcased their partnership and Cymplify’s spectacular jumping style with a win in Saturday’s $10,000 Devoucoux Hunter Prix, held in the Ocala Horse Properties Stadium. The beautiful chestnut epitomized the classic hunter style and earned a class-topping second round score of 88, combined with a first round score of 84.25.

Amanda Steege of Bedminster, New Jersey, riding Susan Darragh’s Zidane, had to settle for second this week with scores of 84.5 and 86.5, to finish 1.25 points behind with a total of 171. Zidane has been a consistent winner in the Devoucoux Hunter Prix, including last week. “Zidane won two classes in the Performance Hunters this week and will be doing classes with his owner later,” Steege said, and was quick to add praise for Donovan. “I am really happy for Hasbrouck. She deserved the win this afternoon.”

Third place went to Aaron Vale on Don Stewart’s Dress Balou. Vale was last year’s winner of the Diamond Mills $500,000 Hunter Prix Final at HITS-on-the-Hudson in Saugerties, New York. The pair topped the first round in Saturday’s Devoucoux with a score of 87 and finished the second with an 83.5 to finish less than two points off the leader, with a total score of 170.5.

Thirty-eight competed over the course, designed by Tucker Williams, of Houston, Texas. The class is a qualifier for the Diamond Mills $500,000 Hunter Prix Final, at the HITS Championship in Saugerties, New York, September 2-6, 2015.

Thirteen-year-old Rachel Hopkins of Ashland, Massachusetts had to pinch herself when she came out on top of the $1,500 Platinum Performance Hunter Prix Saturday, riding US Marshall. Hopkins and the 9-year-old American Hanoverian, owned by Kiki Hopkins, scored a 75.5 in the first round but improved to an 83.5 in Round 2 for a total of 159 to win.

Hopkins was ecstatic about her win, saying, “I never expected to win. This is a really big deal for me. My dad is so amazing for getting this horse for me and letting me do this.”

The Platinum Performance Hunter Prix was the first class of the day in the Ocala Horse Properties Stadium. Riders with first round scores of 70.5 to 80 returned for a second round. The top three were separated by total scores of only 1.5 points apart, with second round leader Alex Trolii, riding Hey Sailor, owned by Buffalo Therapeutic Riding Center, coming in second with scores of 74 and 84 for a total of 158, just one point shy of the win. Third place was an even closer call as Cole Battershaw, riding her Hollister, scored a 75 and an 82.5 for a total of 157.5. Corinne Milbury, on her Kavalier, was in first after the first round with a score of 80, but dropped to sixth after a second round score of 73.5.

Hopkins, who was not in the lead after the first round, said, “I came back in with a score of 75.5, so there was no pressure, and my horse was perfect. I just have to think of every Prix as being a qualifier for $250,000 Platinum Performance Final. Last year I was Reserve Circuit Champion in the Children’s Hunters but this is my first win in the Hunter Prix.”

Tampa, FL – April 6, 2012 – The country’s most skilled junior riders competed in the Main Hunter Ring today, concluding the Tournament of Champions at the Tampa Equestrian Festival at the Florida State Fairgrounds. High-level sportsmanship and good humor characterized the mood of the day’s divisions as families, trainers and spectators supported the young athletes. In the Small Junior Hunter Division, Hasbrouck Donovan piloted veteran hunter Lyle to the championship, winning both over fences classes. Entourage, skillfully ridden by Donovan over fences, was awarded the reserve championship. In the Large Junior Hunter Division, Fidelia, also ridden by Donovan, demonstrated her consistency by putting in another day of solid performances and was honored with the Large Junior Hunter Championship. Hanna Marco guided CR Moet to the Reserve Championship.

The high quality of the participants in the Small Junior Hunter under saddle class appeared a challenging match-up to judge. Entourage, owned by Redfield Farm and skillfully ridden by under saddle by Reily Rieker, demonstrated the attributes that caught judges’ eyes and resulted in the blue ribbon. Southern Belle and Landry Folsom were awarded the red.

END_OF_DOCUMENT_TOKEN_TO_BE_REPLACED

Tampa, FL – Sunday, April 1, 2012 – The final day of the Tampa Bay Classic has arrived, and riders worked diligently today to put in their concluding efforts for division championships. The week has seen substantial talent, and the success of the show and its exhibitors is drawing an increasingly large crowd of spectators to the Bob Thomas Equestrian Center. Hasbrouck Donovan was the talk of the show, securing two championships on this concluding day. Donovan and Lyle took the Small Junior Hunter Championship, while Caroline Kellogg and Felicci followed closely behind, taking the reserve honors. Donovan continued her winning streak aboard Fidelia, gliding to the top of the Large Junior Hunters; while Amber Henter rode Kudos! to a well-deserved reserve championship win.

The Small Junior Hunters started off the day for the main arena, bringing forth a group of talented athletes. Donovan has been the junior to keep an eye on, as she dominated the Large and Small Junior Hunters, in both Saturday’s preliminary classes and Sunday’s championship wrap-up. Guiding Stephanie Keen’s Lyle to the Small Junior win, Donovan was thrilled to end her week on a positive note.

END_OF_DOCUMENT_TOKEN_TO_BE_REPLACED

Tampa, FL – Mach 31, 2012 – Week One of the Tampa Equestrian Series is in its last couple of days with the Tampa Bay Classic, but nothing can hinder the resilience of the hunter exhibitors as they strive for the remainder of championship titles. It was a bright and early Saturday morning as the Juniors and Amateur-Owners flocked to the Main Hunter Ring at the Bob Thomas Equestrian Center for their chance to compete. Hasbrouck Donovan and Fidelia jogged for two winning ribbons in the over fences, ultimately setting a high standard for Sunday’s remaining competitors. Robin Swinderman and Inxs came back from yesterday’s results in full swing, adding the Amateur-Owner 18-35 Hunter Championship to their season.

The main ring opened with exceptional rides by the Large Junior Hunters, each with a flowing first round. The handy course was slightly more complex, involving a bending line, a rollback to a two-stride combination, and a trot fence. The course forced riders to make decisions and acquire a forward canter. While the majority of the division had clean and careful rounds, it was the dauntless riding of Donovan that impressed the judges. The accomplished junior showed Redfield Farm’s Fidelia, under the direction of Emil Spadone, and gained two well-deserved wins. The most impressive aspect of the win was that Donovan was riding the mare for the first time.