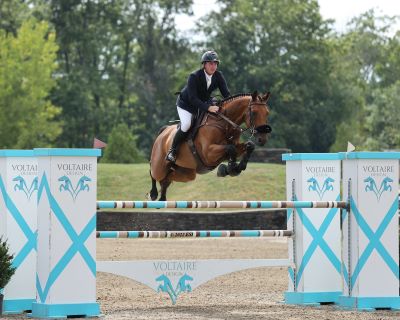 Saugerties, N.Y. – September 4, 2022 – Returning from his home country of Ireland, Jordan Coyle brought a bit of luck back to the United States with him this week, jumping to victory in the $100,000 HITS Grand Prix during HITS-on-the-Hudson VII with Centriko Volo. Coyle proved that his horses are in top form ahead of the HITS Championship’s $405,300 Grand Prix CSI5*, which will be held Sunday, September 11, by besting the seven-horse jump-off to claim the winning title.

The final event ahead of the $200,000 Diamond Mills Hunter Prix Final was held on Saturday during HITS-on-the-Hudson VII ahead of the HITS Championship. Riders gathered at the Outside Course to vie for the win during the $5,000 HITS Hunter Prix, presented by Patti Howard of Compass Real Estate. At the end of the day, it was Hannah Isop and Believe who led the class from start to finish with two impressive scores of 88 to earn the victory. 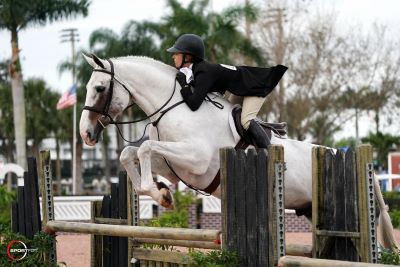 The $25,000 USHJA International Hunter Derby took place in Rings 11 and 12 with 43 riders competing for the blue ribbon. In the end, Hannah Isop and Believe moved up five places in the handy round to secure the victory.

Hunter riders were first tested over a classic round, designed by Danny Moore, which consisted of 12 elements and offered four high option fences. The top 12 horse-and-rider combinations returned to show off in the handy round, which included a trot fence.

Isop, of Pawling, NY, has had the ride on Victoria Hart’s Believe for several years. “He is a complete goofball and total love in the barn,” said Isop of “Luca,” the 15-year-old Hanoverian gelding by Stolzenberg.

Dean and Dotcom d’Authuit Speed to the Win

There were 29 entries in the $2,500 Lugano Diamonds High Amateur-Owner Jumpers as the first class to start out International Arena competition on Friday morning. Contesting a power and speed course format designed by Eric Hasbrouck (USA), 10 finished the course with no faults.

The fastest over the speed portion of the course was Natalie Dean and Dotcom d’Authuit, an eight-year-old Selle Francais mare by Diamant de Semilly x Quidam de Revel. They finished the course in 30.354 seconds, almost 1.5 seconds faster than the second-place finisher. 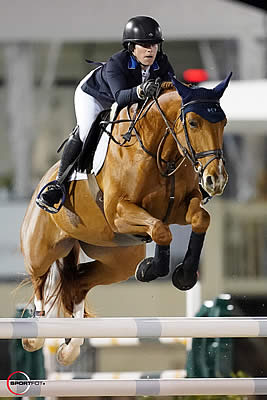 Fifty-five horses challenged courses set by USA’s Ken Krome with less than a half a second separating the top four in a 12-horse jump-off. Israel’s Shulman and Azilis du Mesnil did just enough to top the standings in the end with a time of 31.59 seconds for owner Jill Shulman.

“I love this series because it’s a great steppingstone for horses and riders,” said Shulman, 25, who is making the most of her final year in the Under 25 ranks. “I did it for my first year when I was 16. You get to jump on the grass, under the lights, and as a team, so it’s a great system that they have set up.”

Shulman celebrated a reunion with Azilis du Mesnil after jumping the 10-year-old Selle Français mare (Tinka’s boy x Jarnac) in her first-ever night class in the same event just one year ago. “She has progressed nicely, so it’s nice to see her come back now and win,” said Shulman of the mare she calls “Ginger” in the barn. “She’s super game. She definitely has a mind of her own, but if you go with her and let her do her thing, she usually fights with you, not against you.”

Shulman’s good luck charm for the night was the Lebourgeois family, who bred Azilis du Mesnil and made the trip from France to watch their horse compete.

It came down to a minute to win it in the $37,000 Douglas Elliman Real Estate 1.45m Classic to highlight daytime competition in the International Arena on Friday. Well on his way to making his in-ring debut on the NetJets U.S. Jumping Team this weekend, Brian Moggre, 18, was the only rider to break the one-minute mark over the speed track.

Moggre, hailing from Flower Mound, TX, bested a field of 47 riders to win aboard new mount Nikita Jolie, the horse he owns together with Ken and Emily Smith of Ashland Farms. Their time of 58.61 seconds bumped Canada’s Sam Walker to second place in 60.37 seconds aboard Coralissa for owner Marbill Hill Farm.

“I borrowed her for the ranking class that week, and quickly decided to purchase her together with Major Wager LLC and Ashland Farms,” said Moggre of how the mare came to join his string. “She went in there today really game, and it’s promising to have a new horse go in and be so successful from the start.”

Hunter competition began on Friday with more than 55 horse-and-rider combinations competing for the top spot in the $25,000 USHJA International Hunter Derby. It was Hannah Isop aboard Believe who took top honors with high scores in both the classic and handy round of the class.

The class was held in the combination of Rings 11 and 12 on “Pony Island”. Hunter riders first competed in a classic hunter round and then the top-12 combinations returned for the handy round. Isop and Believe went into the lead in the first round after receiving a high score of 183 points. The pair was able to maintain their top spot in the handy round with another high score of 199, resulting in a total score of 382.

Isop, of Pawling, NY, and Believe have been partnered for several years. Believe, the 14-year-old Hanoverian gelding (Stolzenberg x Lesley), was originally a jumper in Europe and began his hunter career when Isop took over the reins for owners, the Hart family. “Without the owners this wouldn’t all be possible, so I would like to thank the Hart Family. He’s got terrific people behind him. Also everyone at Harkaway Farm – it really does take a village,” Isop commented.

After receiving champion in the High Performance Hunters during week eight, Isop and Believe were confident going into round one.