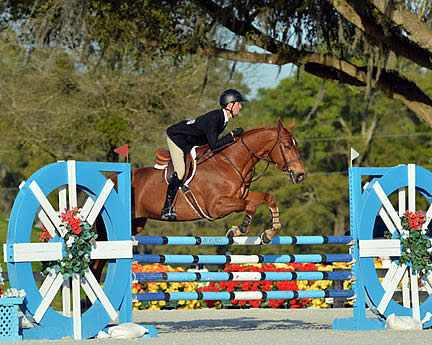 ©ESI Photography. Michael Hughes topped both rounds of the HITS Equitation Championship to win aboard Landis.

OCALA, FL (March 23, 2014) – Michael Hughes is on top of his equitation game with two top finishes in two days. After finishing second to Victoria Colvin in the George H. Morris Excellence in Equitation class on Friday in Wellington, he dominated both rounds of the HITS Equitation Championship to win at HITS Ocala on Saturday.

All eyes were on the 28 riders who qualified throughout the HITS Ocala Winter Circuit in a unique event. Competitors were offered an opportunity to show off, not only as riders, but as horsemen as they turned in their cell phones and left their trainers in the stands. A warm-up judge was solely assigned to evaluate how efficiently the riders utilized their time in the warm-up ring and their effectiveness in schooling their horses. Riders banded together as they walked the courses, warmed up and competed all on their own, forming a sense of camaraderie among opponents.

Hughes, who hails from Allendale, New Jersey, has only shown Sabrina Kalimian’s Landis three times, but they have won every class they have entered. “He basically gets in the ring and does everything for me,” said Hughes. “He’s very simple, never spooks and is a lot of fun to ride.”

Leading after the first round with a score of 86, Hughes was last to go in the second round and again topped the premier 12 with a score of 90. The class took place in the recently-debuted Ocala Horse Properties Stadium and second-round riders rode their final jumps under the lights.

“It certainly brings a new level of difficulty because some horses get so spooky with the lights on – it was like some were riding a different horse in the second round,” commented Hughes. “Landis is older and nothing fazes him anymore. I have jumped in this new ring a lot in the past few weeks and it’s a lot bigger and different than what we usually get to show equitation in, so it was a great experience.”

The first round of competition included several significant rider tests, including a triple line of two bounces, as well as a six-stride line to a trot fence. With lofty goals to win at the Medal and Maclay Finals this year, Hughes rode the tests flawlessly. “Landis is so responsive, so I just touched the reins and he was already trotting,” said Hughes. “I have big plans this year, but you never know what can happen.”

Behind Hughes, Morgan Ward of Milford, New Jersey rode to scores of 81 and 85 for second and Amanda Gellis of Charlotte, Vermont was third after posting a 78 and 80, respectively. Mackenzie Michaels of Orlando, Florida earned an 83 and 71 for fourth and Sunny Drescher of Hinesburg, Vermont capped with top five with a 72 and 80.

With sufficient equitation success pocketed this week, Hughes now turns his attention to Monday’s Great American $1 Million Grand Prix. He will return to the Ocala Horse Properties Stadium this time with a chance to win the richest prize in show jumping and will pilot McArthur for Christina Fried.

“McArthur is like a big equitation horse, so I guess I won’t have much of a transition,” joked Hughes.

The Great American Million will take the stage at HITS Post Time Farm on Monday at 6 p.m. ET and will be available worldwide via live webcast, presented in cooperation with HRTV, iEquine.com and A Good Show. Tune in on Sunday at iEquine.com or HRTV.com.

Just a year ago, Landrigan of Medway, Maryland brought the 15-year-old Oldenburg gelding Acovibo back to work after a three-year hiatus. The pair started in the Adult Equitation ring and just broke into the hunter prix this season with much success and several top finishes, including a win during Week I.

The 22-year-old rider and her former big equitation mount seemed to have both met their match and Landrigan is hopeful that they will make an appearance in the Platinum Performance Hunter Prix Final at HITS-on-the-Hudson.

“We get along really well – and I think it’s because of all the time we spent together when I was getting him back into shape,” she said. “I can’t thank his owner enough for giving me the opportunity to ride him.”

Kimberly Maloomian of Needham, Massachusetts piloted Terry S. Maloomian’s Urlala to scores of 85 and 83 to finish second. Marissa Sterba of Mundelein, Illinois rode Seas Smoke to a pair of 82s for Mary Beth Canfield, while Jordynn Shaffer jumped her own Wonder Street to a 77.5 and 84 for fourth. Jenna Weiner of Miami Beach, Florida and Ferragamo’s Feature posted scores of 78.5 and 80 to cap the top five.

Platinum Performance Hunter Prix qualifiers will continue to be offered throughout the HITS Saugerties and HITS Culpeper summer circuits before the final returns to the HITS Championship this fall and offers junior and amateur hunter riders the opportunity to show for unprecedented prize money.