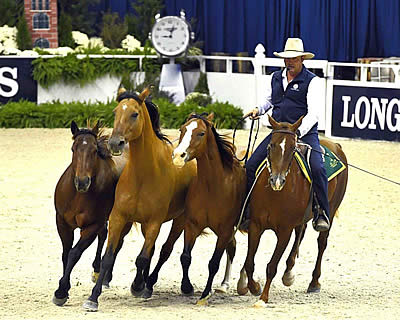 Horseman, performer, and poet Guy McLean is originally from Melbourne, Victoria, Australia, but moved to what became his parents’ Susan River Homestead Holiday Ranch. There, this shy young boy grew up, devoted to horses and developing his horsemanship skills and deep love for the Bush country.

Named official Ambassador of the Outback, Guy has wowed audiences with his performances of horsemanship, Bush poetry, and whip cracking since 1999. He strives to keep the traditions of the Bush and the Aussie stockman alive.

In 2005, Guy was the inaugural winner of Equitana’s “Way of the Horse” young horse-starting competition. It was the methods he learned in the Queensland Bush that brought him victory.

Guy and his talented horses have performed for over a million people and achieved worldwide acclaim. He is referred to by his fans and Australian dignitaries as a “national treasure” and “living legend.” Although this humble Australian still blushes at such remarks, it is these kind words and his remarkable relationship with his horses that inspire him to succeed and continue to spread his message.

Now an international sensation, Guy makes his base in the United States… although his beloved homeland of Australia is where his heart resides.

About Because of Horses

Each week, Elise Gaston Chand hosts informative and entertaining conversations with, for and about horses, horse-people, and the equestrian life. Because of Horses is the horse-lover’s podcast for listeners worldwide, sharing notable equestrians’ personal stories, challenges, triumphs, and expert insights, as well as timely topics and exciting event information from around the globe.

September 30, 2011 (Devon, Pa.) – Spectators at Dressage at Devon today had the chance to listen to step by step commentary provided by Dressage experts on Dressage at Devon Radio. This year’s event benefits from an expanded field of notable experts who are willing to share an insider’s perspective, adding engagement and enhancing interest for all levels of spectators. For the riders, experienced and novice alike, the educational opportunity is invaluable, as the listener gains real-time insight into the thought process of the judges.

“We call the ability to bring this type of event-based broadcast to individual spectators ‘edu-tainment’,” said Don Costanza, partner in the Fort Wayne, Indiana-based FLR Group. “It is well received by spectators because it brings an extra dimension to their experience.” The FLR Group provides the technology and the radios to make Dressage at Devon radio a reality.

Costanza was eager to express his appreciation for Dressage at Devon. ‘’We work with venues all over the country, but Devon has a special place in our hearts. The people are personable, friendly, and professional. This is one of the coolest places to be! We are humbled and honored to be invited back every year.”

During the day, and continuing on throughout Saturday and Sunday, spectators will enjoy the incredible performances of Guy McLean. Guy and his equine partners – Hope, Seuel, Pride, and Spinnaby – have performed all over the world, winning the hearts and minds of thousands of equestrian fans. Guy was first seated on a horse at the tender age of 16 months and began training horses seriously at age 15. When asked how he accomplishes amazing equestrian feats, he uses two words: devotion and dedication. He simply wants to be the best equestrian he can be.

END_OF_DOCUMENT_TOKEN_TO_BE_REPLACED

Devon, PA (September 8, 2011) – Guy McLean is an accomplished, self-taught, thinking horseman who has entertained, inspired and educated many around the world.  Guy, with his equine partners, Hope, Sequel, Pride, and Spinnaby, have performed at the World Equestrian Games, The National Rodeo finals, and many more exciting venues.  McLean and his team of horses have won the hearts and minds of thousands, performing on stages and in arenas, as well as special exhibitions and countless special appearances both live and on television.

And this year, they will perform their equine magic at Dressage at Devon (www.dressageatdevon.org), taking place September 27 – October 2, 2011 at the Devon Fairgrounds, Devon, PA.

What draws us to this animal?
This beast of flight and prey
What is it that enthralls us?
Makes us need them every day.

For me it is their beauty
And their undeniable power
Their Grace, their style and poise
In every second, every hour.

(excerpted from Why the Horse by Guy McLean)

END_OF_DOCUMENT_TOKEN_TO_BE_REPLACED

Devon, PA (August 3, 2011) – Each year as fall approaches, preparation intensifies for the annual International Dressage at Devon Horse Show (www.dressageatdevon.org). The show combines world-class dressage competition and the largest dressage/sport horse breed show outside of Europe with international Fall Festival shops, an array of food and the Ladies’ Day Hat Contest.  Dressage at Devon will take place from September 27 – October 2, 2011 at the Devon Horse Show Grounds, located on US Route 30, in Devon, PA.

The Performance Division, which rounds out the week from September 29 to October 2, offers spectators the opportunity to see top riders from North and South America and Europe.  The horses and riders are judged on their mastery of dressage training and the classes help qualify riders for events like the Olympics, Pan American Games and the World Championships.  One of the crowd pleasers is the Musical Freestyle which is an excellent demonstration of why dressage is often called “horse ballet.”  Riders direct their horses with precise, almost imperceptible aids, including body weight, legs and hands, to move gracefully in time to the music.

END_OF_DOCUMENT_TOKEN_TO_BE_REPLACED

LEXINGTON, KY (August 1, 2011) – The Kentucky Horse Park is honored to welcome Guy McLean, an accomplished, self-taught, thinking horseman, who will be appearing this week at the park.

Through a complete love of horses and a burning desire to find better ways of building relationships with horses, not having to use force, instead, asking them to do the job as a partner, Guy has developed his own training methods, trying something new every day as a new personality poses new problems to work through.

In 2005, Guy won the Australian Horsemanship Challenge, in which he had 2 hours to start a young horse and perform a set routine. He is also a 2-time Australian Bush Poetry Champion and 2002 and 2006 Ambassador of the Outback.

Guy is performing this week, through Saturday, August 6, twice a day in the Parade of Breeds at the Kentucky Horse Park.  Included with park admission.