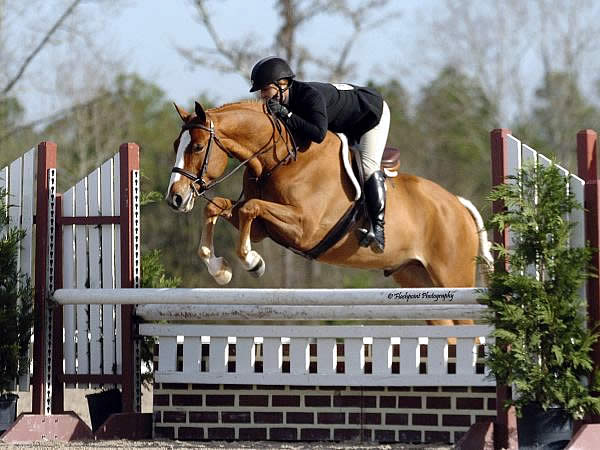 It was a battle of the best during the fifth week of the series, and the admirable chestnut gelding rode to the top of the leader board for a phenomenal conclusion to their winter circuit. Cooper and Sandlot dominated the Pre-Green 3’3″ Hunter division from beginning to end, a feat for the pair as they demonstrated talent week after week in front of over 12,000 spectators at the largest hunter/jumper show on the Mississippi Gulf Coast.

The two-round Open Hunter Classic welcomed over 15 entrants to the prestigious class. It became a heated competition between Cooper and Holly Shepherd. They rode with good-hearted rivalry as Sandlot went head to head for the championship against Shepherd’s LPF Woodford. Only a few points separated the victor, but it was Sandlot who stepped forward for the tricolor with his scores of 87 and 85.

“He jumped the courses great, and has become super consistent. He is very classic in his style. When we are together, we are hard to beat,” Cooper explained. “We took a group of young horses to Gulfport this year to allow us to give them the individualized attention that we value.  It is a circuit where there is opportunity to expose the horses and riders to good competition in a positive, relaxed environment.  With Sandlot we were pushing to the next phase of his education and wanted to be in Gulfport to explore this training.  He far exceeded our expectations!”

Sandlot and Cooper completed their time at the 15th Annual Gulf Coast Winter Classics Horse Show this past week. They will head back to Caves Farm in Owings Mills, MD, and will return to the show ring in the spring for the Pre-Green Initiative.

If their record continues to stay as consistent and strong as this past week, there is no doubt that they will prove themselves unstoppable.

Cooper concluded, “I am excited to have quality horses like Sandlot and the opportunity to make them shine with our team and am eager to expand our reach as we continue to develop the horses and ourselves. I am very lucky to have a very strong team at Caves Farm – Sissy Wickes introduced us to Sandlot, and she has been hugely influential in our program, helping us to strive to be better in every aspect of the program from our riders’ education to our training to our horse management.”

Just some updates and FYIs.

The Gulf Coast Winter Series started today and WLOX, the local television station, came out and was live at our event.  If you would like to watch the short video please click here: http://www.wlox.com/global/Category.asp?c=194069. We are the third video on the left.

We have posted a new schedule on our webpage for the Gulf Coast Winter Classic I.  The changes were minor but because we produce our prize list in the fall and then the annual meetings of USHJA and USEF are in December and January we sometimes must make adjustments to new rules.

Just a second reminder for some other changes…

1. We will offer a non restricted 1.0m Children’s Adult Jumper section because of the new zone specs.

2. We will offer a Walk, Walk Trot, and Crossrails classes that will follow the short stirrup in the schedule.

If you still have not reserved your stalls please call us ASAP because we are putting up more stalls on Monday and I am sure that will be the last visit from our tent man.  Call 228.832.9255 for reservations.

END_OF_DOCUMENT_TOKEN_TO_BE_REPLACED

Jeff is putting the stalls up in Gulfport now so don’t wait too long to send in your camper or stall reservation. It’s going to be a great year in Gulfport with lots of new classes and new prize money offerings along with great improvements, like a new jumper rider’s lounge placed ringside jumper ring one.

Also, if you are tired of the cold and snow, of course you can come to Jacksonville, Florida (the only state in the country without snow) or come on down early to Gulfport. Call Janet at our office for more information about early arrivals: 228 669 2687.